A Build Challenge For The Devs

There has been a lot of talk in these forums about the issues players encounter with almost every build. I’ve spent the last couple of evenings building this small tower base and feel like I had issues at every turn. Mostly with parts snapping into position or even being able to get them to snap into the direction you need/want.

Issues During Build
1, Foundations, as you place them, you need to look elsewhere all the time in between placements else the next foundation won’t be shown in the next area.
2, Fence Foundations, when sticking them to the outside of the main foundations, certain corners/angles prevent placement, you’re forced to remove another fence foundation next to it which is blocking, then replace it 2nd
3, As you build up the triangular walls, different stability is found from square to wedge foundation sides.
4, Stability doesn’t always pass through the ceilings, and wedges often need rotating as not all sides seem to work.
5, The triangular walls often refuse to snap together in the correct direction, often wanting to follow the previous walls angle.
6, The triangular walls do not connect fully and don’t pass on stability.

Throughout this build, I had a hammer to hand checking for stability. I used a central column of door frames and then had to hang ceilings and wedges from them to support the outer walls. I also had to use pillars running the full height of the tower on the outside wedges.

Please, try and build this tower, you will experience almost every single issue people are posting about.

The materials were spawn in but no God powers used to build. 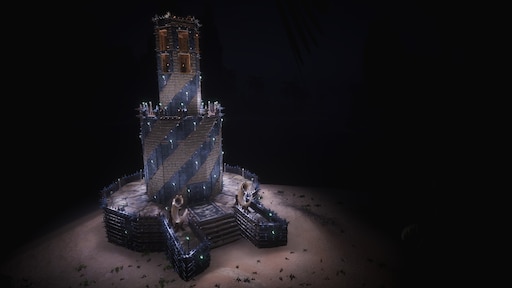 The slooping walls, were not designed to be fully operational walls, only to fill your gaps in the roof.
Its liked complaining about a rocket, wich was build to go too the moon, why it cant reach mars.
Just be glad that you can actually build something like this.

The slooping walls, were not designed to be fully operational walls

I hear you buddy and understood this already.

The concept is more to let them see how hard it is to deal with lots of different issues and this design just happened to show them all with almost every placement.

The issue with the placement of the sloping walls happens to me even when trying to place a single one on top of a wall to fill a hole in a roof if changing angles.

Oh awesome, thank you for taking the time to write this and notify me.

This is an example of the issue I always have, the triangle just wont snap to be above the wall even at just 1 high.

Im forced to keep deleting/replacing foundations, floors & surrounding walls over and over until it wants to line up, the the same BS with the next placement.

The walls all around are at 100% stability. 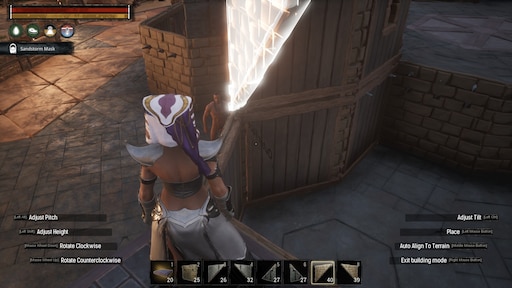 (post withdrawn by author, will be automatically deleted in 24 hours unless flagged)

Interesting, thanks for this!
This might come in handy to check what is intended and what is indeed inconvenient or a bug.

No please dont look into this.
The system works, maybe not perfekt, but with some tricks you can place every piece you want correct.
Its seperates good builders from normel ones.

I hear you, but that’s not the case always.

If this all turns out to be intentional, could someone take some time out to give us a breakdown as to the rules for using these slopes please.

No worries,
If something is intended we definitely won’t change it but I do understand the confusion of what is intended.
As such this post is helpful

The system works, maybe not perfekt, but with some tricks you can place every piece you want correct.
Its seperates good builders from normel ones.

Nope, it doesnt.
Using sloped walls only works with properly round OR square buildings… anything else will cause one to have to use strange ways to finish the roof of a building because of stuff not snapping properly/not at all.

Currently I started to ignore wedge stuff because on those parts, stuff almost always disappears…
So I feel being reduced to square stuff, which often looks… bleh?

Give me a shape i will build roof on it.

And yet again, you are trying to build walls, this is not intentional.
And with some patiance and tricks you can build it, thats okay and should not be looked into it.
Not now in the current state of the game.

Not now in the current state of the game.

Irrespective of what I’m building, the issues are there with the first and singular placement, too many snapping alignments from the wedge foundations which differ depending on the orientation of the wedge as you place it. Clearly I know the workarounds, just getting sick of needing to place, destroy, place, build extra, place destroy nonsense with anything more than a cube.

Besides, all issues should be raised, Funcom can then prioritise what needs fixing first. Obviously this isn’t a game breaking issue like most others, but still a valid issue to be raised mate.

You are trying to build a roof-piece on a foundation, and have some troubles.
I couldn’t care less about this, while building.

Maybe we have two different opinions,
for me the system works, and not for you.
I’ll hope they dont do anything about this.

You are trying to build a roof-piece on a foundation, and have some troubles.

I’m not trying to do anything, I succeed every time, but the entire process is a pain in the back side and has issues which need a look at.

Did you not read all my posts? It doesn’t matter where I’m building, the issues are more than often present, like in my previous post:

The walls all around are at 100% stability.

It’s not every time, I know how to build using them, I’m just pointing out some issues with the system which SHOULD be looked into, after the game breaking issues have been resolved. 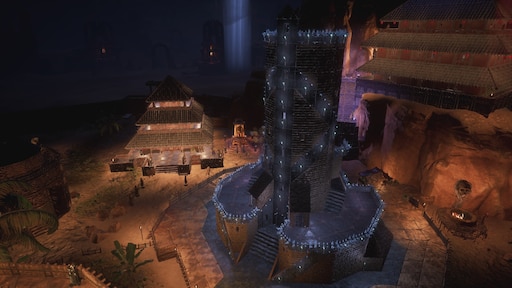 Stop feeding the troll Pit, the humans appreciate your post

Here you go.
Rules: Sloped roof, only walls on the outer side, no inner walls.

Cant show you he original, as someone bust the whole thing away.