I finally figured out how to do the foundation raise trick while still being snapped/connected to a lower foundation. Took me longer than I care to admit even after watching two videos on it

Anyways, any other building tricks out there?
I don’t mean hacks/glitches but just cool tips/tricks for building.

) so good to know the max distance

Nice! I’ll check it out

I just checked my base this morning and I lost stability on a troublesome section. It has to do the the wedge ceiling tiles. Those have been more trouble than they are worth for me lately.

Anyways I had 3 new pillars down in different areas. The pillars were all 100 stability last night. This morning they are 35-40. They are built on a 100 foundation. But they were built from the above wedge tiles down.

Here’s what I’m thinking the issue is. Let me know if that could be what is happening. The pillars were centred on the wedge tile and built down. So when they attached to the square base foundation they weren’t in the centre of the foundation but in other parts of it (as you can imagine from wedge tiles above).

Does that make sense?

Would the solution be: 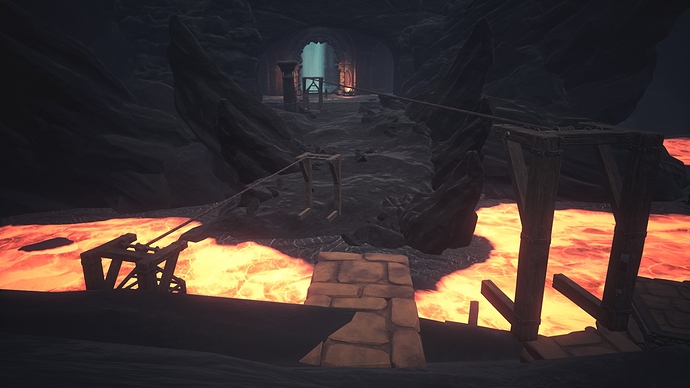 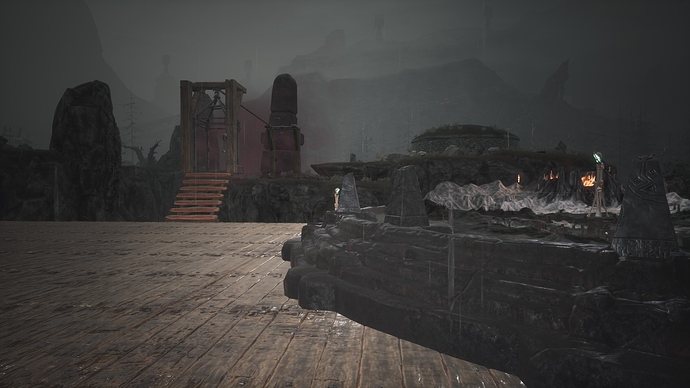 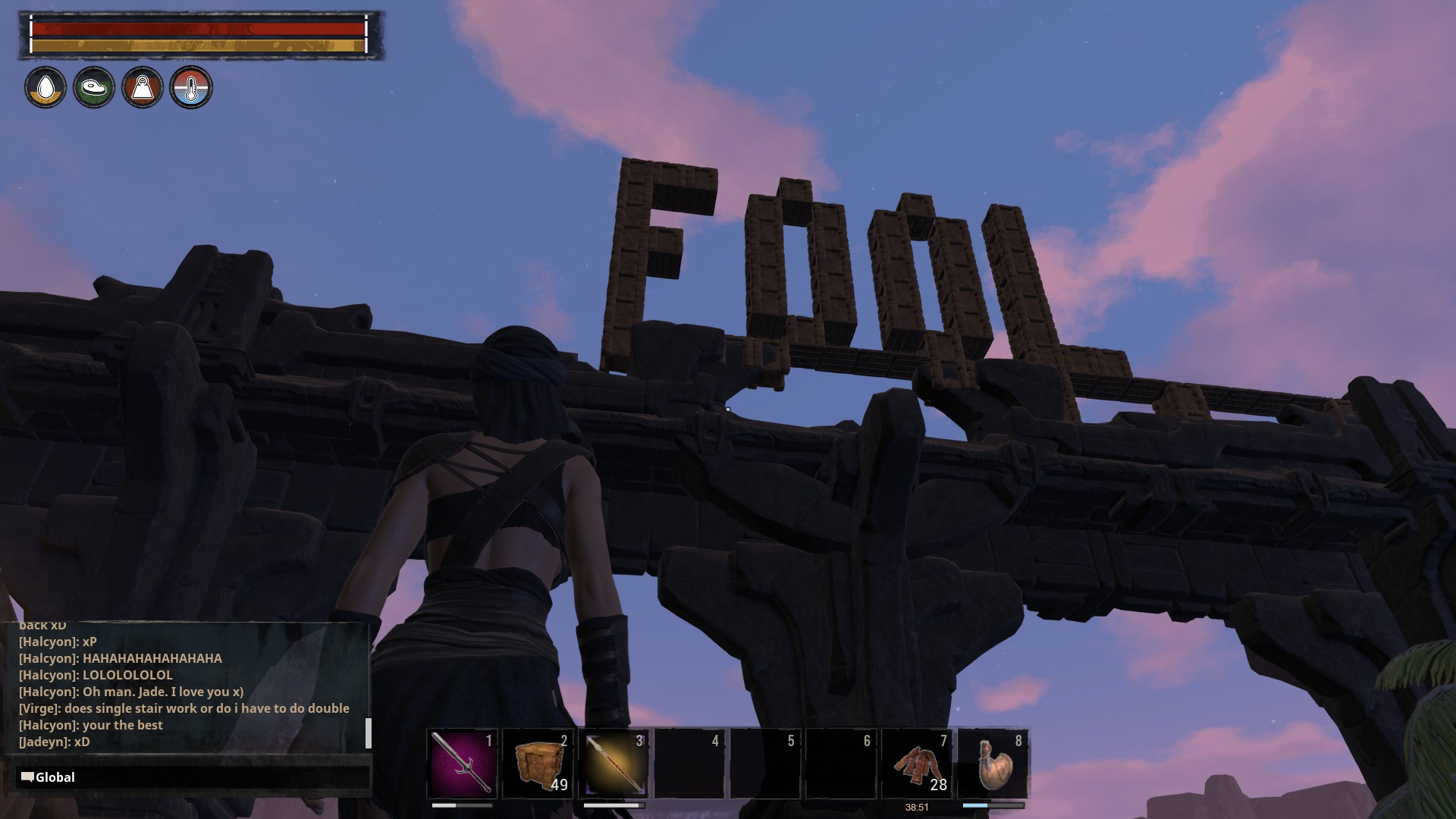 You can place foundations on ceilings. 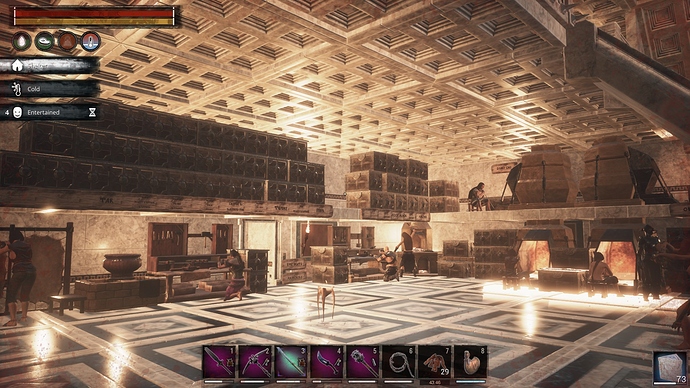 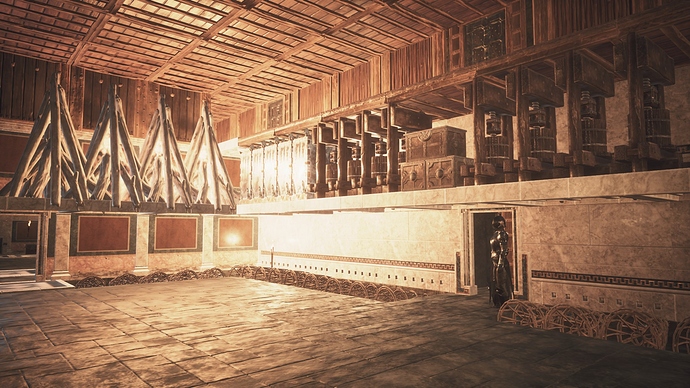 8 tiles across from wall to wall, for a pillarless hall. 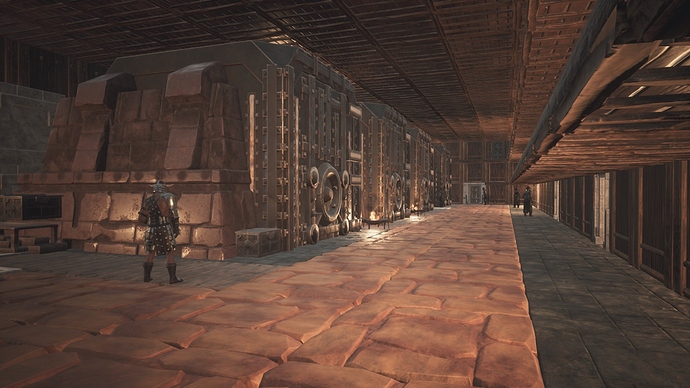 If you want to build something that looks cozy, don’t make it look cozy. Make it actually cozy, as in project yourself as being there, doing what you want to do with friends at your house. 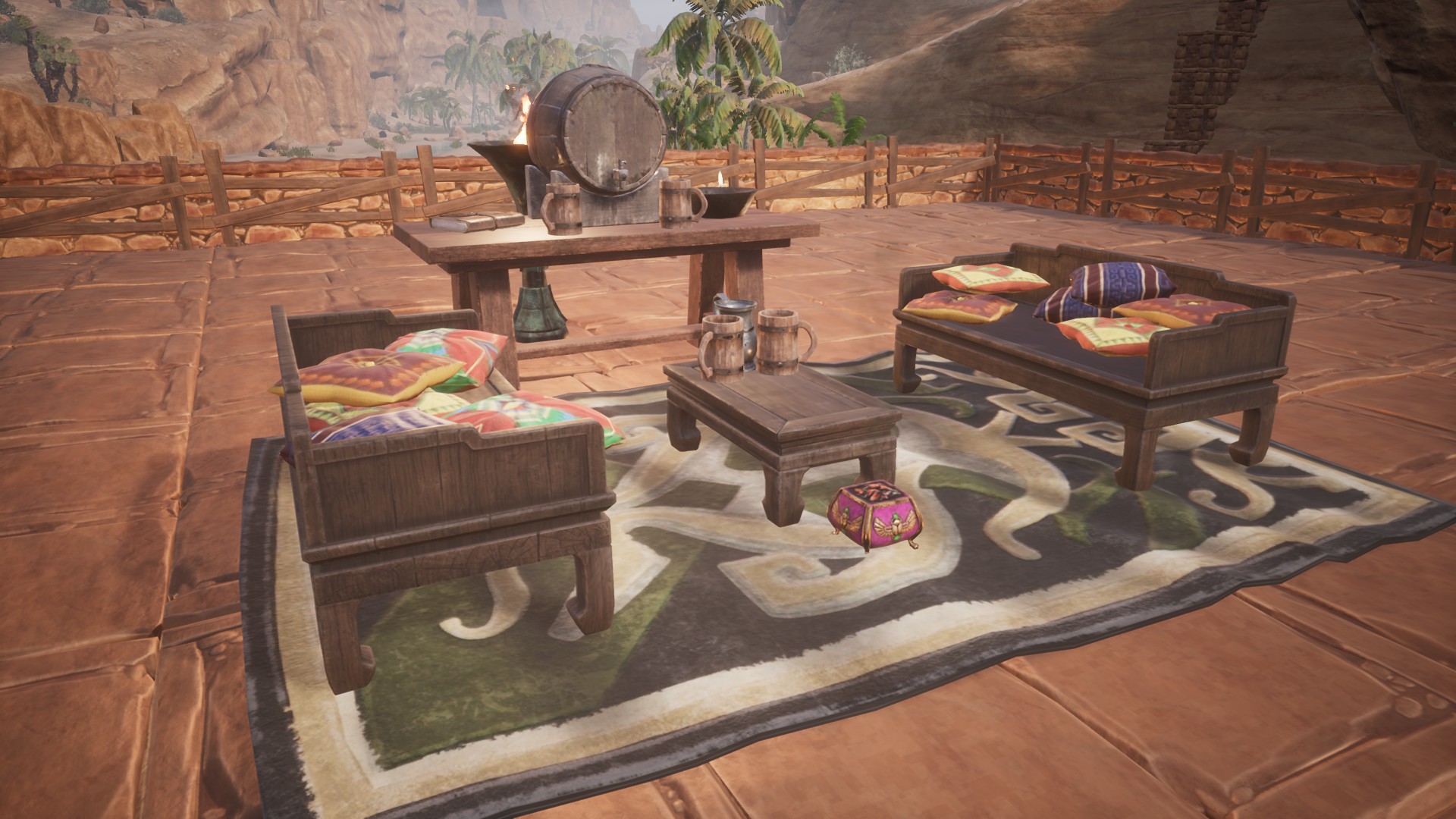 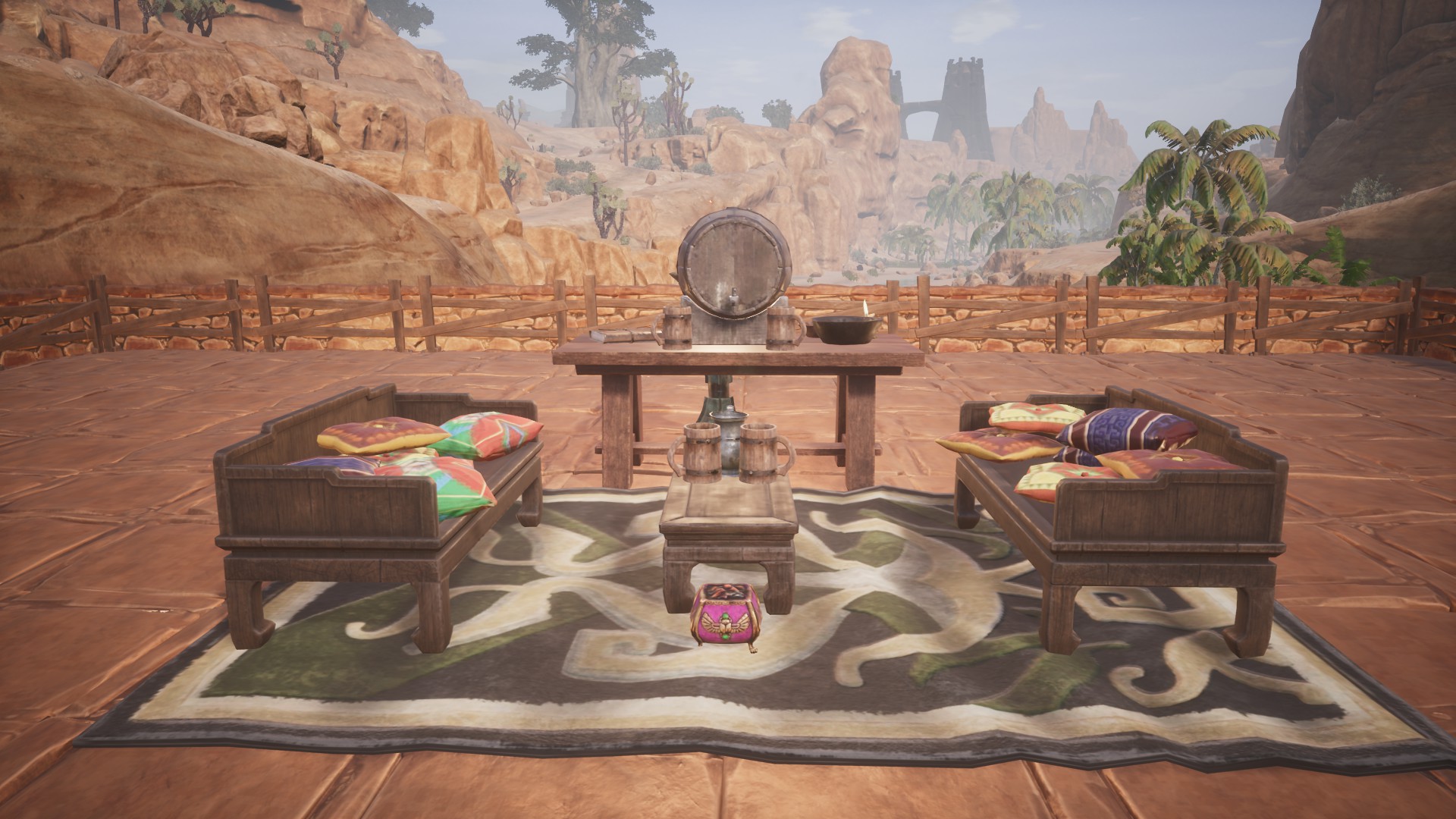 Can go one step further and tell a story through the scene.

Are the couches heavy? How drunk are you when re-arranging the couches? How much does it distort the carpet?
How should the room smell?
Are you more likely to sit on the carpet than on the couch?
Do you have a maid that cleans after you? Or do you leave steins on the floor, which describes your character?

For the one issue I have with wedge tiles and pillars either needing to snap to centre of square foundation or the centre of the wedge tile for max stability, I’ve setup some tests so I’ll see tomorrow after server restart. I’ll report back

After that I’ll play around with all the suggestions and tips.

Some nice bases up there in those pics

After you’ve done so, you can then dismantle the “decay umbilical” and it will remain on the same timer as the main base since it is associated with the same snap grid.

8 tiles across from wall to wall, for a pillarless hall.

Also handy to remember this fact when building bridges. You can have nice broad foundations for the supports instead of extending spindly little pillars downward every 4th ceiling tile.

To strengthen your outer walls you can place the base foundations down, then put walls on top along the inside and outside, then go back and fill them in with foundations. I haven’t done this in a while but I’m pretty sure it still works, makes your walls a whole lot harder to crack

Yes, this has certainly saved me from a few costly repairs! Of course, if you’re like me and often forget to put the walls down prior to adding the foundations, you can still usually clad the foundations with fence foundations after-the-fact provided you work from the ground up. Doesn’t always look as nice, but fence foundations have slightly more HP than walls to make up for it.

The pillars were centred on the wedge tile and built down. So when they attached to the square base foundation they weren’t in the centre of the foundation

Whilst you can make it happen the pillar has not “snapped” into place correctly and even if the game says there is 100% stability with a repair hammer with all pieces often upon server restart or when the building is rendered again when you run to it, the game will recalcuate the stablity based on the actual snap points of the pieces and then you get buildings falling apart.

If playing on a PC there are player-made mods that you can use that have less strict stability coding … allowing for building such as you describe … so this is an option in a single player game or a private server that uses such mods.

Thanks!
That’s what I was worried about. Once I inspected the part that broke, I started to see how the pillars were lined up. The wedges while giving some cool looks and rounded pieces, they sure are giving me headaches.

I’ll destroy the various tests I have for this tonight and setup new (hopefully final) solution and see what happens after server restart.

Luckily the the place this is happening on the edge of the base so I can replace the square foundations with wedge foundations.

But now I’ll always have to be aware of that line of wedges.
It makes sense how it works the way it does. Make sure pillars are snapping between two of the same shapes for true stability.

It’s not like I’d do the smart thing and replace it with square foundations. I like rounded staircase and building walls

This forum is a fantastic place!
Quick and helpful answers from a great group of smart and helpful players!

Useful building trick, the low cost map room everywhere… as long as you can place a pillar 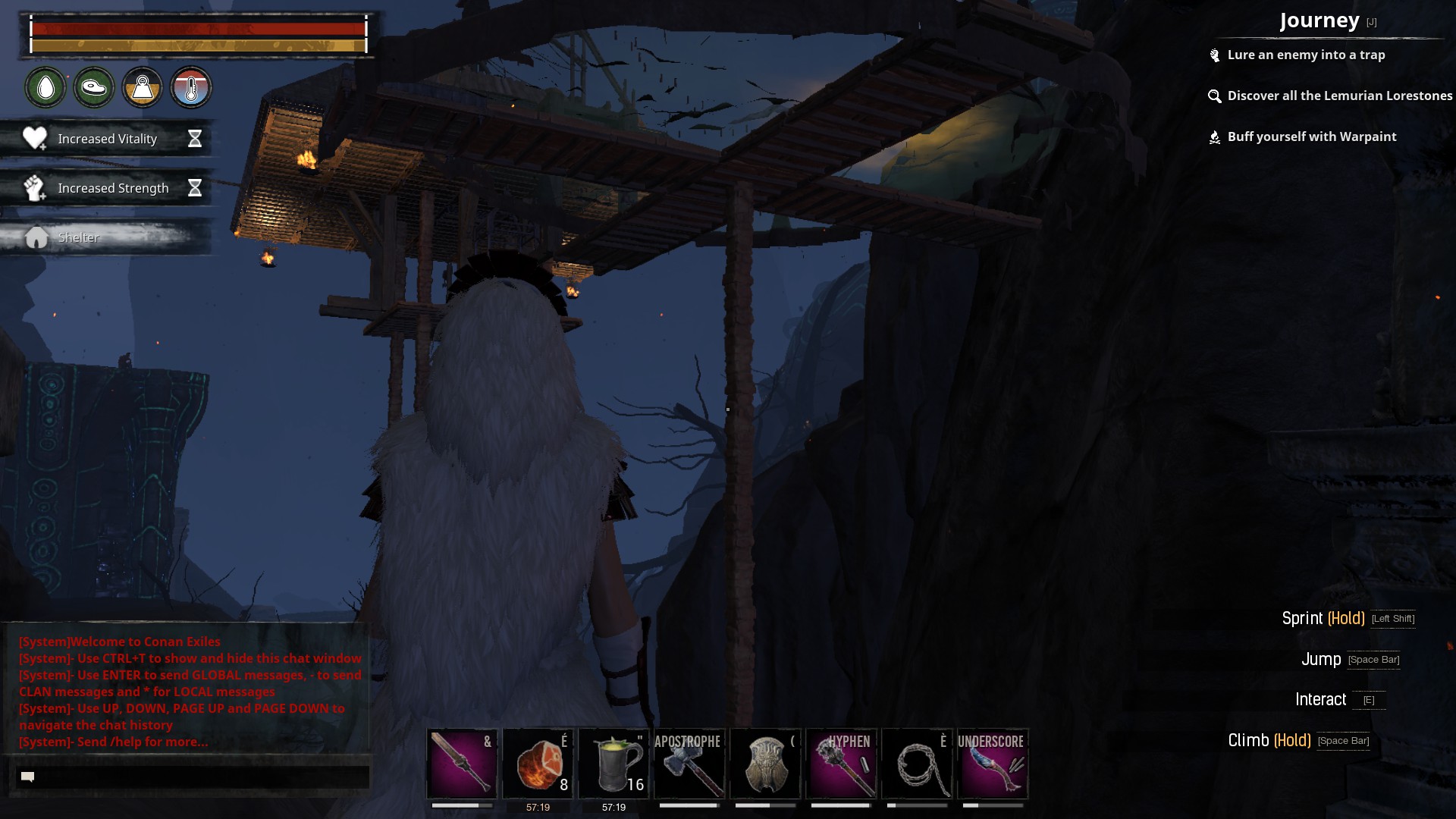 I wouldn’t dare sneeze in the general direction of that pillar.

Even though what u show is on point, there is a spot where u can build all the way to land piece to well of skelos. I will upload a screenshot tonight, but if u r eager to see visit 1005 pve official server. There is both bridge and elevator leading to well

Stick to the lollypopbase. Only a flying base offers more protection. If you build on a pillar in the right way there is no way other players could even touch any building piece belonging to the base.

Indeed, on the server I play on my clan built two public highways that descend to the base of the well. One starts right by the obelisk with room enough for a maproom at the bottom (still have a horizontal elevator to the 2nd floor for the sake of novelty). The other follows the Path of the Penitent / Walkway of the Devout down and comes out at the Lotus plants.