Are Thralls working as planned in PVE?

So far myself and my friends are really enjoying Conan Exiles and it is great to be playing a Funcom game again after a couple of years off AoC. We are playing on an official PVE server.

Would anybody be able to confirm whether thralls are working as planned on PVE servers at the moment? I know the auto-attacking other players has been well documented elsewhere on the forum, I just cannot tell if it is intentional.

Surely with the purge mechanics now in place, having all your thralls sniped by other players makes setting up any sort of defense a bit impossible?

Also, will there be any UK-based official servers at launch?

Seriously, we need options to make thralls passive to other players in PvE.

Seriously, we need options to make thralls passive to other players in PvE.

I would honestly like the option to have clan alliances. My wife and I only like to play together in our own clan, but we meet many people that even though we don’t want to be in the same clan, we would like to be allies with. It would be nice if they could visit my home without being shot down by my archers, and it would be nice if I could visit theirs unharmed as well.

We need Funcom to disable damage to and from tamed thralls. That’s all. Notice how the op is mostly talking about “getting your thralls sniped, leaving your base weak to purges”

So its not so much about our thralls not attacking, but not getting attacked. But obviously for fairness, both things should be disabled.

Again, since no CM or dev ever shows up about this problem, and knowing this has been like this isnce release, I think its a technical issue

Surely with the purge mechanics now in place, having all your thralls sniped by other players makes setting up any sort of defense a bit impossible?

The only way players can snipe them if you leave them out in the open. Cover them with walls and ceilings players cant damage, but make it so thralls can stil lay down some protection fire. For example, build the wall around your house 1-2 stories higher then building itself and place archers on the roof top. This way they will be protected from player damage from outside and stil contribute to base defense, when monsters break the outer wall get inside and start damaging house walls.

It doesnt seem like turning down the friendly fire damage counts towards Thralls…a server setting for thrall damage done/taken would be nice.

This issue definitely needs to be addressed. I already had an army of archers sniped by some a-holes. Now my t3 base is undefended. Also would be nice if other players were unable to simply walk off with non combat thralls. When I want to deal with hostile players I’ll play a PvP server.

Yeah Thralls are acting pretty strange after the latest big update on top of the existing issues with Thrall AI and other issues.

Hopefully they are looking at refining thralls all around.

I agree with you regarding the building system, it is versatile. But it I want to build a base that looks at least semi-realistic/plausible (the role-player in me dies a little every time I see the hideous monstrosities people build). You should not have to build daft looking buildings to combat game mechanics!

Repost from my today’s reply on my own thread XD which is exactly about this. Consider it a bump to the matter. This must get solved, I’ve had the game for 1 year, 300+h player, didnt complain. Till now

After 3 days of work with 2 persons, and with the help of tons of materials dropped by other’s demolished (abandoned) bases (not gonna lie, since its a legit thing) I have built this: 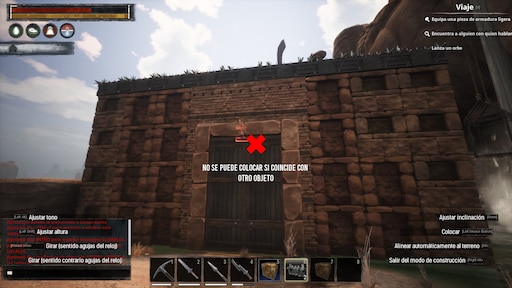 A Huge wall with wood spikes on the ground, and reinforced black ice spikes on the top, so its unclimbable. I am building like a fortress (hi server lag) that will surround my whole base, like a megadome, including a whole lake / pond.

So that way I will be able to place thralls on the 5-6 archer turrets I had built (now abandoned after the pve raid of another player killing them with impunity) and at least if I open the big door, let the Purge enemies enter, and have my thralls help, as intended.

Or at least, if Purge happens when offline and they break in, I will have my archers and thralls alive to defend. But even if they survive the Purge while im offline, the same hole npcs used will be used by a player troll to kill em. But at least they will have defended haha.

Also, my wheel of pain is now under walls, because people can take not only food or tamed thralls (LOL) but even the taskmaster. Suuuuuuuuure wheel of pains were designed to be an indoors building, right? hahaha

So to sum up: its not like I cant cope with this design flaw, I am getting over it making that huge fortress / megadome, and leaving even wheels of pain indoor.

But it is taking a huge amount of work, its stupid as a design we need to make everything indoor in pve, and the ratio of players leaving after getting their thralls killed vs those who are doing madness like me to prevent it wont be very balanced.

They need to fix this on release. I’ve found in the frozen north a good amount of normal bases with archers on top / walls, I could have killed em as trolls did to me, and leave those bases defenselesss / purge ready, effectively allowing me to RAID, or produce same effects as a raid, in PVE

Oh, I missed this comment full of wrongities XD.

People can kill them even if you have 300 layers of walls and doors, as long as it is climbable. OK? so you are wrong. Let me add to this that in PvP there is the risk of having base owners come and kill you, unlike in PvE. Example (of a big unclimbable fortress that wont still be enough if you leave a single climbable hole): 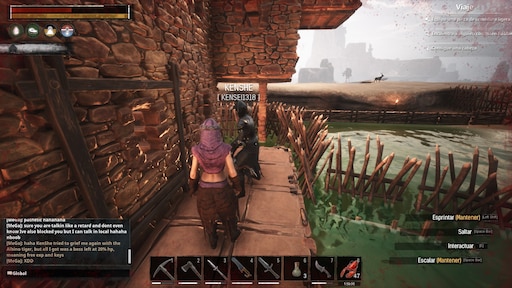 People can kill them even through DOORS and WALLS, as I witnessed myself. Proof here of a dead body of somebody that killed some through doors, his corpse is half inside my base (trough the door). Corpse, because I did meanwhile place walls and roofs so he couldnt escape and keep poking my archers through windows, walls etc. Example: 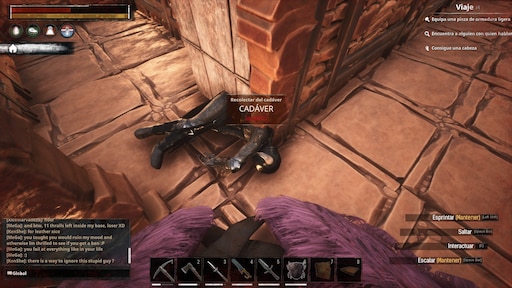 So either your post was very inexperienced and or uninformed, or you are spreading misinformation, so your griefing methods remain valid on release

I bet if I say - “don’t stick a metal fork in the power socket, it might kill you”, you will be the one coming at me with “You are wrong! If you stick a rusty nail in it, it also might kill you! And if you touch a pair of striped electrical wires - it will kill you! Oh, and dont forget - if you assemble an electrical circuit out of 2000 Tesla model S batteries and lick the battery contacts - you are dead! Stop spreading misinformation about electricity!”

In your second screenshot you have a backwards wall. You should really fix that. lol

“…If you leave them out in the open…” You are aware that thralls dont shoot through windows and stuff are you? Simply placing them on a wall doesnt work, definitly isnt enough. I had a huge base on a PvE server and when I say huge I mean huge(15k black ice with walls going 15 stories high at some points) and yet someone still found the need and put in the effort to figure out how and where to climb in and kill a thrall that was standing in the courtyard and wasnt bothering anyone.

I went into PvE to play alongside other players, not against them (and not indirectly either).

As to everyone else. This isnt a new issue and I have pointed it out in the past. I created a topic on Steam that gathered quite some support aswell and asked about thralls in PvE during the devstream. In one such stream they picked up my question and Joel said “didnt we fix that…” before getting distracted by something else. So based off of that, I consider this a bug and I hope they do actually fix this soon.
I’m currently playing Singleplayer only, mostly because of this reason while I do want to get back onto the PvE server I used to play on(because besides that one troll everyone there was nice, but one rotten apple is all you need to ruin it)

Amazing! Got a confirmation that it is not working as intended, and a fix is incoming, from Joel Bylos himself, which I thank very much for his answer!

By Crom! This is great news. Thanks Megamadmax

From yesterdays update on testlive. Better than nothing but I hope they understood the issue and have the same point of view than us:

Its not that pve players are creating problems, trolling or griefing non tribe members with their thralls…its the opposite xD you gotta leave them behind walls, roofs and doors.

Hey, but not even tamed thralls in wheel of pains. In fact, even taskmasters can be taken from wheels, which im “suuuure” they were designed as an indoor only building, considering they are so small eh xD

While this happens in pvp as well…there you can defend, kill any troll, attacker or griefer and loot him.

In pve you can do all that with absolute impunity, as you cant be stopped any way.

With todays fix, it will be even easier to do so xD

Short answer: they are working as intended, as Joel Bylos just confirmed.

It only took more than a year, and hundreds of posts to Jens, Joel etc, to get a definitive answer, yeah!

While I am thankful for his clear and personalized answer, I expected to play hunreds of hours after release. I cant gripe they cant do exactly what Ark devs did, which is what Joel just said they cant do.

Oh… well that is MASSIVELY disappointing. Good to have an answer at least