I finally bought this game with the DLCs and was looking forward to playing online. However after spending hours in official servers levelling, building - I noticed other players had built huge Tier 3 structures around many obelisks and blocked off passageways between cliffs.

I play alone in PVP. Am I supposed to farm up a few hundred explosives all the while being vulnerable against entire clans in order to blow up these structures which they could replace almost instantly just so I can try to play the game normally?

I’m pretty miffed that I’ve lost so many hours for nothing, and at this point in time I’m using a mod to play offline.

Is there any plans to stop players building everywhere and monopolizing the map so newcomers may stand a chance?

I play alone in PVP. Am I supposed to farm up a few hundred explosives all the while being vulnerable

Yes. It is doable.

Keep in mind as well, that you can also use a trebuchet as long as they don’t have a god shield. Make a alliance with another clan on the server to remove those structures. You don’t have to join the clan just be friends with them. Or you could join a clan.

I might mention that I’m in Asia where the only ping under 150 is on servers with Chinese players. The Chinese players don’t separate much, they generally ‘Zerg’.

Similar experience in a game called Shadowbane years ago, unbalanced the game. It’s a collective ‘them’ vs the world in their eyes. So I can’t join a clan not to mention the language exchange difficulty.

I’m assuming as soon as I started using a tebuchet I’d be set apon and killed before I’d be able to level any structures?

Any pointers for a one man army? 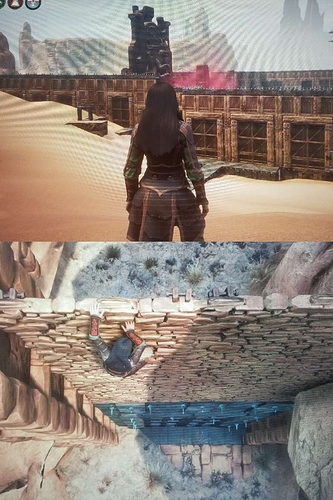 Well nevermind. I get the picture. Established clans can completely close off all obelisks, resources and places like the sinkhole in the photo and have horded so many resources they’re able to replace them instantly. It’s part of the game, I understand. I wish I’d known that joining a clan is essential to gameplay success otherwise I’d never have purchased.

Thanks for responding btw.

It’s too bad you feel this way. I typically play solo and enjoy it more that way. I hope you find a way to hide away and build up. but if you want to raid and they Zerg up then maybe you have to find some allies, if you don’t like clans. It’s a war game and big numbers means big scale of everything. You have to be the thief and hide away after raiding . Another option is always private servers, I’m sure you could find some way to play in your own style.

The problem with an open world pvp with building is that you can grief easy toward other players. And the chinese has alway had this mentality of Collective clan Instill in their culture, history and ecomics. It like they were born to be a Borg. Hence is why they have never truly lost their country to another. They are a force to be reckon with. The only solution is to go on private server with active admins that ban player with ill practices.

This is one advantage in having a steam account and steam game is that you cannot grief in games for very long after being banned.

Conan was mostly a loner. I spent 12 hours grinding solo, 4 hours roaming around looking for a secluded place to build a small base, right up high ‘in’ a mountain’ far away from everyone, and walled-in almost completely except for a small crack while no one else was online. Stored a lot of resources including workbenches etc… and after getting online just 2 hours into “allow damage to structures” the next day, everything was completely gone from 3 locations. And there’s only 7 other players online at once. They must have a GPS satellite up there somewhere. There are no official PVE-C servers in Asia available either. So bye bye Conan ‘Clan wars’. I’m done. /Salt

Conan was mostly a loner.

Eh, both yes and no. In the original stories he very often joined various bands, of varying sizes, often rising to leadership positions or outright leading them, regularly after killing the previous chief.

But settling for long wasn’t really his thing, even when he became King of Aquilonia he was restless (and he had no patience for fools or politicians).

Fair enough, I know this. I used to read the original comics in my twenties. Mostly tends to be either yes or no though eh.

Make explosive jars, and hit several of their bases. Damage as much as you can every day. Destroy crafting stations, kill thralls. Wreak havoc with explosives. Take out tall walls at the foundations so you get maximum damage. Take out as many high value targets as you can.

Are you on PS4? if so i have a solution to your problem. Join Season in the Abyss the server is controlled by me and this type of BS that would get you banned. Thats why when i first opened my server i took a day to myself with my other buddy and we built public maprooms at all the obs and made sure to let everyone know blocking of anything that someone else may need is an instant ban no questions asked.

That was what I was hoarding resources for, but they seem to be able to know everywhere I painstakingly put things. Thanks for the tips though, appreciate it! Perhaps I coukd hide chests in long grass somewhere or sth.

I’m on PC, and in Asia. EU and USA my ping is about 205 lowest. You’re the kind of mature minded people I’d like to participate with though. Sincere thanks!

Conan was mostly a loner.

I feel like using Conan as a baseline for anything regarding our players in this game is a mistake. He’s the cream of the crop, and we’re the crop. While solo play should absolutely be a choice, I don’t think it should ever be a preferred or equal-difficulty option. Being solo in a world this harsh should be hard mode.

I’ve been on servers where solo players can absolutely thrive. If they get bullied, a larger clan steps in to help. If they need anything, many of the clans are often willing to lend a hand/resource/whatever. But there are also servers where this is not the case. If you aren’t completely resigned to leaving yet, I suggest you join a new server and ask if its hospitable to solo players and gauge things from there. If it isn’t, leave and try another. You’re bound to find one that can help to facilitate your play style.

I just never play on official servers. SO much better having a responsible server admin.

I’m puzzled here…, are you now all of a sudden going to investigate this kind of issues? Can you maybe post an official funcom position on this?

You guys are funny, we can not get a restart on the testlive servers we are testing for free but now all of a sudden you are going to investigate griefing on official servers? The only response we get from funcom in one day is this? we have been asking for a simple daily restart of the testlive servers for 2 weeks now and you feel the need to investigate a griefing issue which you are having on each official server since they became live, these issues you have been ignoring for months on end now, issues that funcom officially mentioned they would not even look into??? And you are asking what server??? Every server is having this issue…

Zing Funcom developer, last reply, last seen on forum 27 July 2018… and on now 30 August you are asking on what server you are having griefers??? pls… Sorry for being so rude and salty, but common…

Between the blockading and abusing the land claim some servers, as stated before, are unplayable. Some will hate this suggestion apply a new land claim function that disrupts this sort of play style. Use a banner that gives them a claimable space and limit per player with in a clan or by number of players in clan. Use that banner like Rusts decay box. It kills two birds one stone.

I have been saying this for year since it went beta. We need a clan building restriction not so much for server but for other players. I suggested a clan size toward a building Max count. Like its impressive to see some builds but If you give unlimited. Player are not gonna learn how to build correctly. Thus break creativity but if you limit the building count. Then players will think correctly in how to build a proper base.

Such as no more this ugly ■■■ Square but rather “Ok, lets try building this but in a castle formation”. Or they can give a clan A large claim area but that it no more then one spot on the server.

many private server already Adopted the One clan base rules because it was breaking server and was not working for a healthy PVP scene.

So please Funcom come up with a item to craft that can lay a land-claim sizable area and get rid of decay system or least make every building pieces within that land-claim to be Immune from decay and make every place-able that is not in land-claim to have a decay system. This would prevent the unwanted building decay but also prevent clan from building everywhere on the server.

Limit this item to one but make it to where you cannot place another one until you dismantle the other one. Let me be clear on this Dismantling/destroying this item Should render your base unable to be rebuilt and decay start counting down until you have build this back up but each item has a 24/hr cool-down before you can place-down a new one.

In a PvP setting this should be the most protected item, should this get destroyed during a raid mean that you cannot rebuild the base so you will have to be on defensive with active members constantly repairing and fighting off the Raiders. Now 24/hr cool-down may seem a little extreme but this just the start and maybe we can talk about improvement to be balance in PVP.

Also this could be a good way for Purge to be fixed as well like oh look there is a base item there lets get to it.

I understand. I mentioned I have to play on Asian servers though. Twice after leveling to around 25 I was kicked from a private server (probably because I didn’t speak Chinese; I’m not sure, I didn’t try talk to anyone and vise versa). I gave up after that with the threat looming over my head of sudden ejection. There was a Japanese server and they were friendly, however the crafting rate was set very very slow and only 2 other players.