Box stacking... will these stay or pop?

Anyone know if I can trust these boxes stacked like this?
I seem to remember reading somewhere a while ago that stacked boxes may ‘pop’ randomly

Any better solutions for box stacking?
(and yes, the misaligned boxes really trigger my OCD) 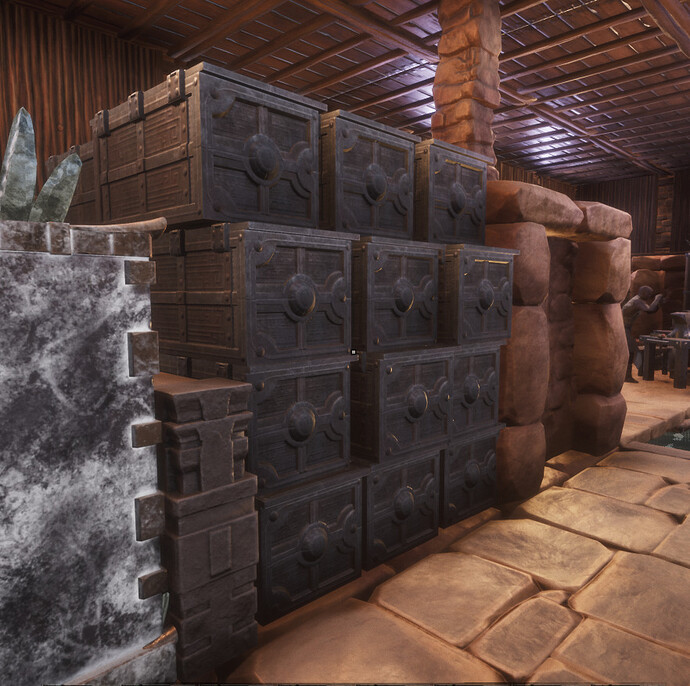 Don’t know if they still pop, but sometime last year I stopped stacking things after a period of losing several chests because of both stacking on top of each other and chest placed on shelves + an armor bench that had decorative items placed on it and a chest on a shelf above it.
Since then I haven’t dared taking the risk, maybe someone else can confirm if the sudden disappearing of stacked chests still is a thing

yea, that was my experience from last year.
wondering if anyone knows whether or not it’s been fixed.

In every base I’ve built, I’ve placed chests not only on the floor, but also on shelves, tables, and crafting stations. My base on 1823 had literally more than 100 chests. It stood for more than a year before I let it decay. In all that time, I lost only one chest to stability problems.

If you’re worried, put the most valuable stuff inside chests that are on the floor, i.e. foundation, ceiling or wedge.

Because I was primarily a PVP player space was always a premium.
so I stacked chests quite often, still do and have had no issues.
However as CodeMage suggested all of my important items were placed on the bottom, or somewhere hidden unstacked.

I personally never lost chests from stability loss , only from bombs

, however I don’t stack them this way anymore , if my base is small , I place ceilings over every single bench and I place them above the benches on ceilings . I suggest you to do the same ,it is very practical . Now if you play PvP , trust nothing else than vaults or hidden (nonstacked) chests .
ps . Have great fears about chests on rags and carpets , this one I suggest you to avoid .