With the current amount of players enjoying the game now… wouldn’t it be awesome to bring back legacy pvp titles?

You could keep the current system in place, just like it is now. People can choose the title system they want to show before their names.

Would get me hyped for sure 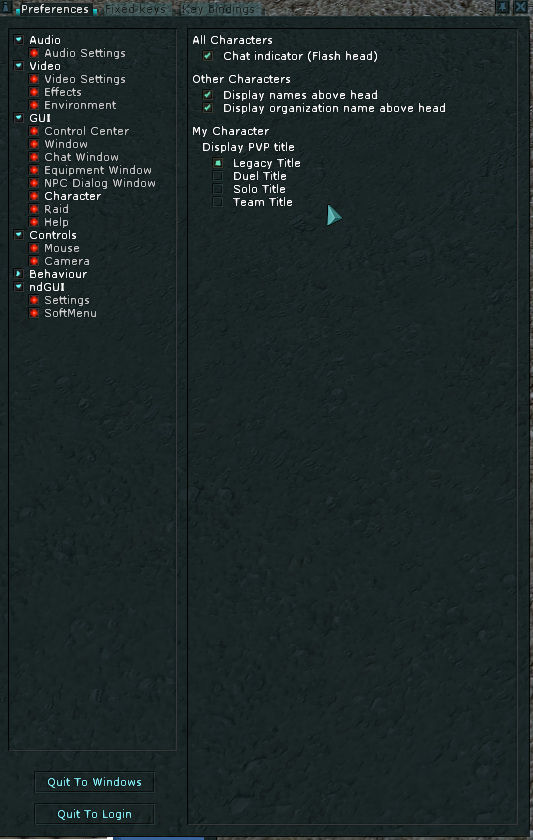 I think what Harios ment is the possibility to earn (and lose) a legacy PvP title. The option you posted only displays your legacy title that you’d managed to get before the pvp title change (if you even had any).

Hi Harios btw. I would like to see old PvP titles back as well, but I wouldn’t get your hopes up. There’s like a zero active development atm.

Exactly what I meant! The thrill of taking risk and the possibility of losing or winning new titles was really cool.

Yea bro, but I remember how it affected mass PvP, especially towers, where some title farmers used to sit behind tabbing specific target for title farm, then smashing alpha to farm damage and then gain kill to increase title score.
It brings fun in PvP process for specific person, but affects mass PvP badly.

Anyway legacy title farm was fun, that was the only reason why I’ve rolled agent myself

I love how you hope that someone actually listens to you.

The feel that I have is that AO dev. or any major changes are frozen, and will remain like that indefinitely.

The game could be improved like hell with a few small tweaks, but thats already way too much work for them.

Getting the legacy title system back is still something that would make me play this game so much more.
All the talk about people camping and avoiding fights isn’t that big deal if you simply give us an option to
enable/disabke it just like you can choose to show your duel/solo/team title currently. I wouldn’t even mind
if the legacy title stays fully hidden unless you choose to show it.

Just by having a risk to lose something makes the pvp way more exciting. The current titles are just a boring kill counter without any information of your losses…

If not all u will have is bunch of agents sneaking 24/7 bore and bs, and they only dare to attack when awa ch rdy, then run and skeak again.

Well, nerfing agents and why not NTs too should be the first thing to happen. Simply get rid of the double AAO check on all perks (doubt the devs even know that “attack rating 100%” as attack skill is AR + AAO vs def instead of just AR like most perks are.

And since everyone and their families rolled agents and the pvp quite often is 10 agents sitting in sneak, one easy fix would be giving FP nanos -2k concealment penalty or something. If you want to play that way you should be dying just as fast as your target is dying to you

Anyway, I already said that there should be an option to hide/show the legacy title so people who care too much about it can still pvp without being embarassed of losing their title. Even if you hide it the kills/deaths would count of course. That way people might have the balls to pvp with high title and lie about having master even if they lost it months ago.

Title game was really fun, frustrating and brought both the worst and the best out of people.

Like many others, in Dark Front, we used to plan kills all the time. A bait player, people in hiding waiting for, X became visible, queue Benny Hill music and chase to the waiting kill team

lol those times, are you playing again esq?

Nah, I have been tempted to but I jump in occasionally with my crat and nothing is doing, well not in my +10 time zone.

Do miss the camaraderie, etc…I’m not sure I can burn myself anymore to stay up insane hours to play with my euro/us friends.

Vass went all out to get me to join rk19. He threw everything at it lol. I was however tickling horde tonsils with my fist.

I’m well past it.

Hope you are well and healthy.

Bring back old slice n dice, and NT triple and increase hard caps on player damage in pvp. Lets bring back old mechanics that are archaic and dont fit with the current MMO climate.

I always enjoyed the win/lose risk of the previous system…

Current system encourages PvP in general, nothing to lose, nothing to gain. It’s become just another grind.

If AO had a bigger population, I would say bring back the legacy system.

On Herk, I do remember getting excited every time I saw a squishy omni with Neophyte/Experienced flag up in Borealis.

Also. I got shot in the @$$ by an agent yesterday for 12k+ AS. And then his friend shot my @$$ again seconds later, for an 11k AS. I died. It was not pretty for me. If Legacy titles come back, my enfo goes from Neophyte to Rookie or something. -.-

Also, Hello at Harios. Long time no see. Forz too, but you will always be a creepy Rk2 enfo. 8p

please explain what is so awesome about the “current mmo climate?”

balance would be nice but it would require constant changes, balance needs to be maintained because any changes to balance will shift how people play the game

I think the reason agents were left at the top is they were always considered the sort of pvp focused ganker profession. Same way NT is thought of as a glass cannon. This is relatively healthy because these are two of the squishiest professions in absolute terms. It’s better than a meta dominated by untouchable defensive adventurers, for instance

Also, Hello at Harios. Long time no see. Forz too, but you will always be a creepy Rk2 enfo. 8p

Hey Herk! Cool to hear from ya buddy

I think the reason agents were left at the top is they were always considered the sort of pvp focused ganker profession. Same way NT is thought of as a glass cannon. This is relatively healthy because these are two of the squishiest professions in absolute terms. It’s better than a meta dominated by untouchable defensive adventurers, for instance

Yeah this sounds about right. Balance is something we constantly asked for and let’s be honest, every profession is playable in pvp at this moment. Soldiers and Fixers got a really hard time not constantly dying to the same stuff tho. NT’s play a big role there. I remember the state of pvp pre SL… it was mostly blue smurfs in GA4 and enforcers with EQB. Traders and NTs were totally useless back then, like really really useless. Far from balanced at the moment but close to acceptable.