My friend and I were having this discussion but I was not 100% sure.

Lets take a Relic Hunter or Beastmaster for example which have high Vitality multipliers whenever they level up (percentage of HP permanently gained).

If you inflate their HP with a Vitality armor, will they gain a higher value from this through the multiplier than ifbthey were to be wearing a strength set at the moment of leveling?

Or does it work off of base HP, not total?

As far as I know, armor doesn´t affect the multiplier.

If I’m correct, HP gains per points in Vitality are fixed numbers, not percentages, so bonus to Vitality via armor won’t give more HP/leveling up in Vit.

The only influence you have is by thrall or pet feeding: 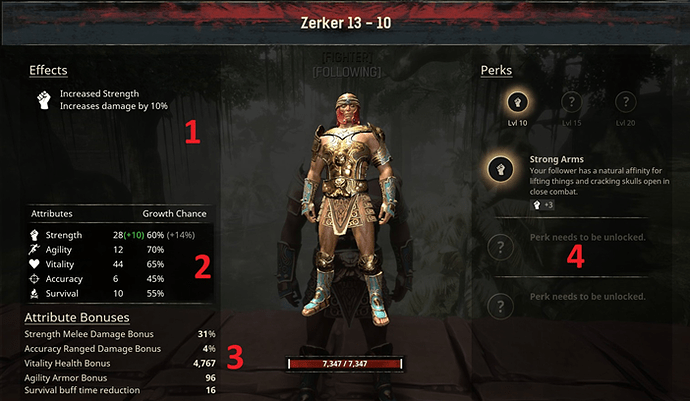 Thralls are player-allied NPCs in Conan Exiles. They can be captured and recruited by the player to be used as servants, either working at crafting stations, as companions following the player, or as lookouts guarding buildings. Every NPC capable of...

Giving them the right food increases its growth chance

Thralls have set values of HP gained per point of vitality. It is different per thrall (tier and tribe). So Armor with Vitality will be affected.

If a thrall gets say 100hp per vitality, then putting on 10 vitality armor will grant 1,000 health.

Does the vitality armour add up to growth chance while leveling?

It does not, only food does that.

Ahh I got confused by your reply, okay then

Thanks for the replies but id just like to clarify my question as I think some of the answers are referring to growth chance.

What Im asking is, every thrall gains permanent HP/base health everytime they level. If theyre wearing a Vitality armor at the moment of leveling, will the permenent HP gain they receive by the level up work off their inflated vit/hp from the armor, or will it still base off their “true” current base hp/vit, or simply by a fixed number.

Im not referring to influencing growth chances with food. Nor am I referring to their innate multiplier that changes their current hp whenever slapping on a vit armor set.

A point in vitality will give a set amount of additional HP regardless of bonuses from armor or buffs. Technically the total HP of the thrall has no effect on the gain from leveling vitality.

Thank you Wak good sinple answer. I had been leveling my thralls wearing vit until 20 then taking the armor off after, thinking I was gaining more permenent hp during the process.