Can you take the HEAT? 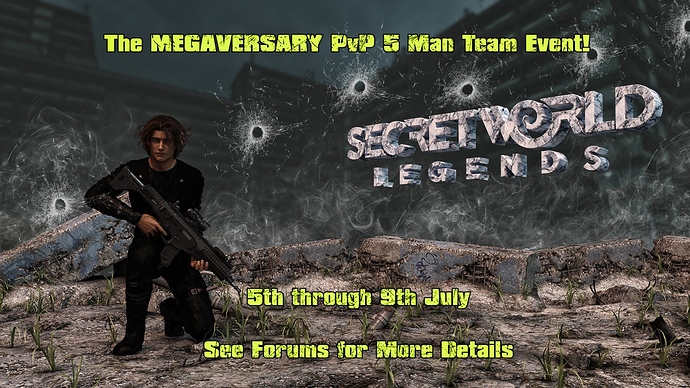 Here we go! Sorry for the wait but as promised here are the finalized details:

5v5 TARGET (Normal Mode)
1.) Each team will designate ONE player as the “TARGET” This player is revealed to ALL participants.
2.) Objective is to defeat the TARGET player.
3.) There are NO gear/build restrictions and changing builds during the match is allowed.
4.) You may re-enter the match after dieing if you are NOT the TARGET player.
5.) Matches will be LIMITED to 10 Minutes after which a sudden death match between the target players will determine the winning team.

5v5 TARGET (Ghost Mode)
1.) Identical to Normal mode with the exception that the TARGET will only be revealed to each teams referee. This must be agreed to by both teams before starting the match if this mode is preferred.

REFEREES
Their will be ONE referee for each team that’s main objective will be to watch the target player and call the match once the player has been defeated. The referees will be clearly identified by their attire.

RULES
1.) It will be against the rules to match the referees outfit at anytime.
2.) Sabotaging the match by an outside source (ie. other player entering the match) will end the match immediately. Matches may be watched from the balcony above the arena.
3.) Registered Teams will have FIRST priority in the time slots. After which teams will be on first come first serve bases. To register just let me know the team names before hand and I will make note of it.

Thank you and and credits to Hollopoint for his amazing digital art!

I’m going to need to get a group… because I really really need to be a TARGET!

I would love to be part of this, but ill be honest and say i can’t know what my calender looks like that far into the futur =P

With or without PvP suits?
I hate Glyphless EFB, so if you make this green gear only I might be interested, if time suits me.

I would like to do this but it adds a whole new layer of micromanagement into the mix. Ie. more rules = more potential for cheating and more qq. I can’t ensure gear wont be changed once in the arena so I will need to settle with the horrible EFB that exists to make this work.

It will be over a 5 day period at various times. Actual times to be determined once I get several groups interested. Hopefully there will be time slots for randomized 5v5 also if enough people are interested in that.

Would it be a separate competition per timeslot or they all go into one? And mostly concerned with hitting a timeslot where the whole team would fit (i’m the odd European out in my group of buddies xD).

Also wondering if the TARGET will be marked/known prior to match start, or is that something for the other team to figure out through trial and error? (kinda hope the latter)

Either way something like this would be amazing =P

Wouldn’t that throw a curve ball into the mix! I might make that a thing. Will be working on a script with official rules this week and I like that idea. Perhaps TARGET player will only be revealed to each teams referee. Then the referee calls when the target player is down.

Also I should note the referees will be clearly visible. Probably wearing something that stands out. And it will be against the rules to match the referees clothing.

Another thing that has been brought up is potential match sabotage. I like to think are communities better then that but if it becomes an issue the most I can do is have a third neutral player watch the entrances off the fight club to ensure only team participants enter.

It would be easy to tell the ref of each team who is the Target prior to the match. Maybe put the ref in a Raid with the team (so alone in 2nd group). This would make it quite easy for them to see when the Target dies, and they wouldn’t compete for heals with the actual team if they keep somewhat of a distance.

As for sabotage i would think the community is better than that. Otherwise maybe have the teams pick a uniform. With the ref in the raid, if they get suspicious of an extra player, even if they match the team colors, the ref can do a quick scroll through raid and confirm them missing maybe?

Refs could maybe wear the tokyo flags. They would literally stick out, that is of cause assuming the refs own it. Otherwise some coloration that clearly stands out. Maybe make white off limit for teams and only for refs (saying white cause it would stand out better from Seouls background/lighting i think)

I actually rather enjoyed the idea of a pre-designated target.
Sort of like a double fox hunt.

Could get a luck shot true. On the other hand the teams might have to systematically root out the target. Agree on an assumed target and take them out, see if they were right. Also by not knowing the target, behaviour can give away the target, or be used to trick the other team to kill the wrong target.

Either setup would be interesting, and the tactical mentality different for the two.

but tricking someone into killing the wrong target does not actually accomplish anything…
its the same as killing a defender, which you would want to be doing anyways.

the idea does not really function without more layers.

for an idea like to really work you would need something like a payload type of gameplay.
ie: escort the “target” to the other teams “goal”.
ok, now there is a benefit to a hidden target and tricking someone into killing the wrong target while the real one accomplishes something.

All good points. On a side note I prefer a more direct system in the sense that knowing the target eliminates a potential for someone saying “oh that’s not the target we told you!” Again unlikely but the simpler the less chance for complications. I may offer the potential for a hidden target if both teams agree to the terms.

Heats even - since you named it HEAT

I do not have a team , but would really like to be involved in this, is there anyway to reach out here on forums to maybe pool together some ppl to have a team

Sweet looking forward to it =3