Greetings Fellow Exiles…I have been making posts lately asking for help and tips on how to combat a type of Griefing from a specific race of griefers. The answer came from the help of someone in another post and from a friend on another server who pretty much gave me the answer without even realizing it…

It requires UTTER TEAMWORK and large clans but I feel it can be done.

naturally it can still be obtained from the bodies of Savage NPCs but only a little at a time…which means they have to use their own resources wisely while everyone else has an unlimited supply.

And good luck to them trying to report it. My entire server has been trying to report the a-s-s-h-o-l-e-s that plague us for 2 months and no one, not even the “Exploit Hunters” have come to aid us in their antics…Let me know what you all think on this. And ways the plan can be improved!

I think it’s extremely sad that it has come to this, and it’s a massive failure that there’s no real response (other than a politer version of “deal with it!”) from the developers. I totally get that full-time admins is not possible, but a (very few) ground rules, such as “don’t wall off obelisks on PVE/PVE-C servers”) and the will to enforce that for a period of time might get the point across.

Definately sad yes. That’s why I avoid officials as a plague, no admins, no rules, no matter pvp or pve, griefers win (most of the times). Despite Jens statement and reasoning behind not having admins in officials, sooner or later they will have to do something admin wise, or else give players reasonable options to deal with them (other than spamming the map with buildings to prevent obelisk blocking for instance).

Edit: as it is now, you must do the same thing you critisize to deal with this, which is… dumb.

It’s a sad situation my server has to now employ this method to fight fire with fire…But we really have no other choice. The clan we are dealing with doesn’t speak english and doesn’t understand english, this think they can do what they want, which involves harassing everyone on the server, they PK without warning and when your back is turned or least expect it and steal your stuff, they are making foundation webs all over the place…the leader of their clan has specifically stated that he is purposely trying to kill the server by lagging it to death… 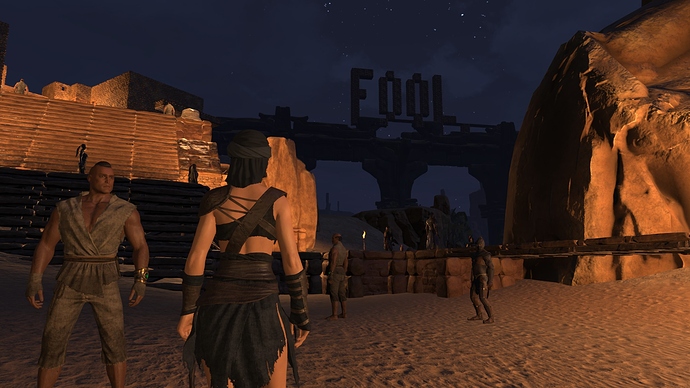 Always assume it’s gonna get sooo much worse. Escalation leads to some serious crazy thigns and griefers actually LOVE this. It’s exactly the sort of madness they want to instigate.

So… Let me warn you. It’s not too late to turn back and go full Tardigrade… Cuz you can either chill for a month, or wage war for 6 months.

Now…on to the Geopolitical things…

It is wise to sub-divide the map into defensive prefectures managed by a clan that dominates that territory.
It’s advisable to start either a steam group and invite your allies to proliferate these dark tips, or invite them into Discord. Coordinate them live.

One beneficial effect that the griefer has on your server is that he unites all the people on it, like Hitler did with Europe.

Be warned tho, you will lose allies, because they will burn out. Afterall, why fight something that loves conflict, when Fallout 76 is at the doorstep?

Best ask them to merge into your tribe in case that ever happens.

Secondly, not everyone has the time to wage this war. You need to have the road networks be built over night, and I don’t think clans will follow that schedule.

It’d be best if you manage all of it, but assign small manageable tasks to your allies, i.e. building decay umbilicals to the closest obilisk or whatever.

None of this belongs on PVE or PVE-C since building cannot be removed.

I have one for you. Over on 1745 we have some Japanese folk that ran king scorpion though my compound killing both of my greater rocknoses at Id just made from the Halloween special.
Not only will we never have them again, it would cost 440 gold to replace them, thats how many eggs it took to get them. They wont even talk to us, maybe they can not. Still a crappy thing to do to someone on a PVE server.

None of this belongs on PVE or PVE-C since building cannot be removed.

Most definitely not. But Funcom had not accounted for PvE at all. PvE is merely a mod of the PvP, and we all noticed this too late.

The griefers on 1818 are ALSO Japanese, and they do not speak english in the slightest, their clan leader RoG uses a translator to try and speak english to us, but it all comes out as very messy and unintelligible gibberish…He seems to be under the delusion he’s on a PVP server even though we scream at him “YOU IDIOT THIS IS PVE”, but because he doesn’t understand english he doesn’t get it, or get why he can’t destroy our buildings or kill any of us when PVP-time ends

Halcyon, all your tips are really useful and I will be bringing them up to the other clans in 1818…Sadly I have realized that walling the Obelisks off is not going to work for us…just be cause of the “you cannot build here” wall that goes around most of them…the stress torches sound strong though…but it means everyone will have to abandon using the fast-travel…

Address him as a Hikikomori if he’s being rude.

we’ve tried google translate to speak with them, but they just reply in japanese and we can’t read what they are saying back…

Once again, I’m beginning to think that this is one big social experiment by Funcom to see how to get rid of official servers.

After all, THEY pay for official servers and that’s just a drain for them.

After all, THEY pay for official servers and that’s just a drain for them.

At this point, i’d just like the save file of my server. They can clean it, then make it public, then close the official servers. And this is me saying this; a loyal die-hard official server inhabitant.

Hm… maybe a poll would be interesting.

If you find a way to get them to send you a server’s save file, please post a topic for it. I’d love to get the save for the one I’m on and relaunch it as a paid/private server!

Maybe Funcom could make this an option?, downloading your server’s db files?

Griefers have been a cancer in this game since EA and Funcom is too slow to take action. There are countless ways to reduce griefing and promote more healthy servers, many have been suggested even here in these forums, but they are still blind to this.

The server I play used to have a very agressive griefers clan and it took months of constant complains, reports and direct contact with devs to finally get them banned. So yeah, they do take action, but I can count a few dozens of players who quit the game before they did something, and this is a reality in all over the official servers. Funcom doesnt seem to realize the huge number of players they lose every month due to griefers.