Could Funcom Create an Option to Remove the Bracelet Without Ending the Game?

I’ve killed all the bosses and have all six artifacts needed to remove the bracelet and complete the last accomplishment in the journey diary. However I do not want to end the game and start over, and it would be nice to be able to complete it without doing that.

So what I propose is the following possibility. On removing the bracelet one could be given the option to either restart the game or go on living in the exiled lands. After this one would run around without the bracelet on, as a sign of having accomplished the last feat.

If one hit the border wall then, either it would give one the opportunity to die/respawn or end the game. Or it could simply give a warning message that going any further would end the game with a clickable option to continue or not.

Either way it would be nice if FunCom could create an option to remove the bracelet without restarting the game.

What do you think?

Only if it leads to a new map. The bracelet is the reason why we are bound to the exiled lands.

Right, well that is why I was suggesting that walking past the border wall without the bracelet after having achieved the final accomplishment could create a warning message to either end the game or not. If one chose to go on anyway, it would then go to the same cut scene that one gets now when one removes the bracelet followed by the game restarting.

Lets say you have three pathways to exit the exiled lads:

Each of these pathways are represented by a new but small map.
There prevail extreme temperature conditions. Any time the player is threatens by starvation and thirst.
The player must now find the way that leads him safely through these maps. He has to overcome many obstacles. His success depends on his attributes and the choice of his religion.
At the end, if he is successfull, the way leads him to Hyboria. 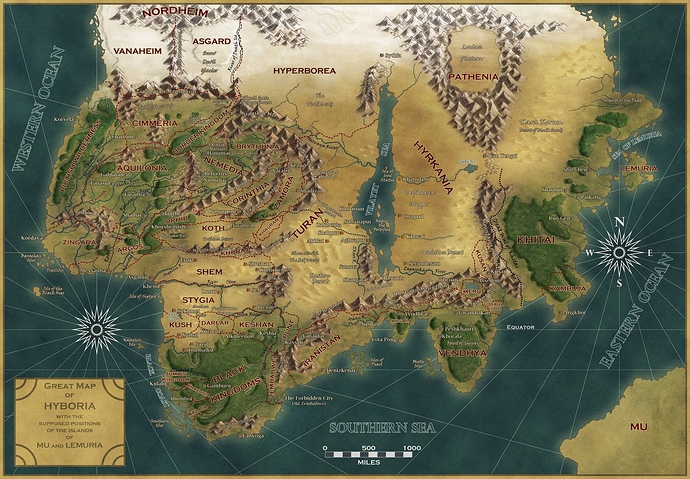 Just to point out, you wouldn’t be able to fast travel without a bracelet, since that’s what you attune to the obelisks.

Hi NeonOctopus and welcome to the community! You shall recieve one big emphatic YES in agreement off myself on this one. As a purely Offline Singleplayer, it took me over a year to grind out a three storey Black Ice mansion. I just dont have the time availability to start again at my beginnings. I also had this to say in a previous thread:

Personally, I feel that this final Journey Step could use an ever so minor tweaking. I wish that when we are given the option of removing the Bracelet using the Keystone, selecting the “No” option would also log the Journey Step as completed.

You have gathered the artefacts of the Giant-kings, their enemies and their allies. You have defeated the Servant of the Ring and earned your right to freedom. Now, you need only complete the ritual to free you of the bracelet and escape the Exiled Lands forever. Or, you can choose to stay and dominate. You must make a choice.

The description suggests that it is a personal decision between two options. So why not allow the ‘No’ option to complete it? Sure we wont be able to take revenge on Thoth Anon (probably a suicide mission), but the Keystone will still be safe with us in the Exiled Lands beyond his reach. Furthermore, we could still elect the “Yes” option at a later date if we wanted to change our minds. Tweak the completion message slightly and allow us to log the step as completed using the “No” option.

I just dont have the time availability to start again at my beginnings.

My understanding was that even though you end up creating a new character, you stay in your clan and/or retain possession of all your stuff if you aren’t in one. I’ve never done it mind you so you may want to check into it.

My understanding was that even though you end up creating a new character, you stay in your clan and/or retain possession of all your stuff if you aren’t in one.

Not quite. What you may have heard is that the old character’s possessions stay in the game, but the new character will have no ownership of them, or connection to them. If you’re playing on a server and have clanmates, they can of course invite your new character back into the clan (if they want to!), but if you don’t, there’s no way to gain back those possessions.

You can of course use the old character’s buildings/thralls as enemies/dungeons etc, I know of several people who have a lot of fun playing the game that way.

What happens at the green wall if one chooses to lose the bracelet and stay?

Well my idea was that the choice to stay after losing the bracelet comes up AT the green wall, repeatedly if necessary every time one walks into it. If one chooses to stay then, the character walks back a few yards automatically from the wall. If not they leave.

Just to point out, you wouldn’t be able to fast travel without a bracelet, since that’s what you attune to the obelisks.

Well one could always have the bracelet in one’s inventory for that if necessary, or create the option to put it on and off like a piece of clothing after that reaching that achievement for purposes of traveling. The map room could even have inventory space added for it, and it one lost it after that it could reappear in that map room inventory space.

Either that or perhaps one could get a new one by talking to some designated NPC(s) somewhere on the map.

The player must now find the way that leads him safely through these maps. He has to overcome many obstacles. His success depends on his attributes and the choice of his religion. At the end, if he is successfull, the way leads him to Hyboria.

Hmm that’s actually a cool idea. Funcom could do that too, or perhaps have do the simple update solution with the few modifications added for teleporting and dealing with the green wall for now, and then add in more map space as a reward for reaching that achievement later.

My understanding was that even though you end up creating a new character, you stay in your clan and/or retain possession of all your stuff if you aren’t in one. I’ve never done it mind you so you may want to check into it.

Yeah but without your achievements and strength level. If you are part of a clan at all that is and not a solo player. Solo players I think get totally reset. I think adding this as an update would be good for both these reasons.

ContrastX has released a mod to address this though is not like what is marked as a solution but it is an alternative. He has a lot of interesting ideas planned to give replayability.

From the description:
“Instead of using the Keystone to unceremoniously leave the Exiled lands, you will instead be able to replay your character, restarting him or her with exclusive gifts.
You will not have to recreate your character. However, the Keystone will drain experience, attributes, and feats in exchange for these gifts. At 60th level, you may use the keystone to activate a random item received on respawn. This item will give an edge up as they begin to rediscover or reinvent who they are.”

He has a nifty little storyline to explain the alternate use of the keystone.