Creature of the lake

I’m Aussie so I appreciate jumpscars like this
So my new base is on the edge of the noob river during the day I keep hearing loud roars then one night I swam across the river and out of now were a alligator jumped out of the water to attack me I stopped and looked around and saw nothing it only happens at night or early evening. When you swim you go straight into it.
Brilliant.

any body else had this happen? 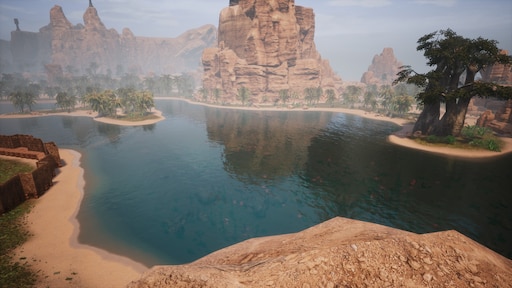 Steam Community :: Screenshot :: Don't swim in this lake at night


Ok Just found out it happens in the day too 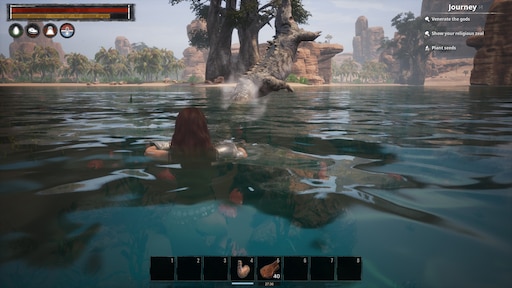 Steam Community :: Screenshot :: Crikey look at the size of that Croc

Steam Community: Conan Exiles. Crikey look at the size of that Croc

Pull your knife and do a Mick Dundee on him

I soo want a megaladon. the water ways are waay too safe and kinda lifeless.

Conan lore involves him being a Pirate… if they were to add that down the road would be awesome! And yes a Meg would be sweet! … … And I saw The Meg in 3d… so worth it!

Yep, happened to me a few times while swimming along the river.
Startled the bejeezus out of me.

So when you hear the “Jaws” music starting up, its time to get out of the water.

I have to agree, the water is too much of a safe zone currently - while it’s convenient (and I totally take advantage of it), it doesn’t really convey the primeval fear that (deep) water should. The dichotomy between “fear of the deep” and the life-sustaining nature of water is very interesting and could be used to more advantage in CE.

I have a feeling they probably wanted to do something like this because while I may be a fairly vocal critic of CE/Funcom at times, the atmosphere of the Exiled Lands is amazing, and they really nailed the feeling of primitive life (in the early game at least). But aquatic combat is so, so hard to get right and almost requires a game focused around it - which CE isn’t, and shouldn’t be, so I understand why they didn’t.

Same can be said for mounted combat - in the many, many games that have tried, very few have succeeded in creating anything satisfactory in this regard - perhaps only one have come close to getting it right: The “Mount and Blade” series.

Haha dont know if intended but cool![quote=“Deamo, post:1, topic:31541”]
I’m Aussie so I appreciate jumpscars like this[/quote]
I dont see the relation between being from Australia and enjoying getting scars after being injured due to jumping xD

If you have ever seen one jump out of the water in real life …that Snap will send tingles down your spine.
in Australia Crocs are everywhere mostly in the rivers out back.

So when you hear the “Jaws” music starting up, its time to get out of the water.

The music needs to be played on a Didgeridoo for it to count and you need to be drinkin’ a Tooheys 4X to hear it.

You should do a jumpscare with giant snakes in the jungle.

Like a giant anaconda dropping from a tree branch on top of the player (or nearby).

I was thinking running through the swamp and seeing a massive snake in the distance slither in to it to give the feeling you are not alone and
since you can’t see in the swamp (without clipping ) it’s even better.