Official answers only please, no speculation.

Were the cursed items designed to be particularly powerful items which have a severe drawback or were they something else entirely? What is the intended purpose of having the cursed items? (Black feather helm for example)

Now if they were actually strong enough, or performed status effects to offset the wasted 40 points in survival, that would be a great idea.

Sadly, 5 points in damage or 3 points in armor pen isnt quite enough.

Thanks for the replies! Yeah I’ve read the speculation regarding magic and cut content, but none of that seems to have been ever confirmed, so that’s why I only wanted solid info.

The best way to go about fixing the underwhelming power of these items would be to give them a special bonus such as removing the stamina regen delay, passive health regen, increased sprint/jog speed, half stamina consumed for dodge rolls, etc. Interesting effects tailored to particular playstyles.

Lmao. I have yet to die to the Red Mother. If it looks like things are going bad, I nope tf outta there without a second thought

Official answers only please, no speculation.

Good luck with that

Were the cursed items designed to be particularly powerful items which have a severe drawback or were they something else entirely?

My speculation is that it’s either a joke item, like The Brittle Bastard, or something they are/were planning to use in the future, but haven’t gotten around to yet (and probably won’t, either).

It’s certainly not a case of sorcery being cut from the game, because it was added in the updated that revamped the Exiled Lands capitals, which was quite some time after the release day.

Lmao. I have yet to die to the Red Mother.

Another Funcom half-Arsed idea I feel. Somewhere in planning someone came up with the idea based on a direction, but direction was totally abandoned for one reason or another, and now an item exists with no use ingame…for reference see Surge mechanic on Isle of Siptah and its abandonment. Example 2, see raid mechanics, or lack there of.

What would be the in game abandonment with it. Stats shows “normal” legendary weapon. Unless i am missing something, it give +5 ACC and 57 DMG? No thte best i agree, but not broken and punishing on palyer.
Th OP is stating that there are in game weapons/armor that have no use and cripple your stats for no other reason than to just …well who knows.

Yeah even if you don’t use the acc, the raw damage is the highest for axe. And since a ton of people also use throwing axes, the acc ain’t even that bad.

If we need to talk about +acc, let’s talk the Khari Pike lol

I like to believe the cursed item’s are like trap’s, they act like normal weapon’s but curse you instead of boosting you, as much as there are crafter’s that like to power you up there are one’s that like to just curse you and laugh at their evilness, so my speculation is it’s a role play item, left by evil people for the unsuspecting to pick up and get cursed, so probably working as intended lol

@Halk Those exist, they are the ones that don’t have the label but curse you anyway

Hmm for example? Really can’t recall one myself (have I been lucky?) In any event for a proper trap (and not a mislabel) would be to have 1 time in 4 the “Maybe Cursed” item actually gives a useful buff to keep folks from throwing them out right away once they learn what they are…?

What did you notice about this axe?

. Some extra damage perhaps? I always thought it was my idea and I didn’t want to jump in here without proof. Playing in ps4 I am so behind, that sometimes it’s better for me not to speak

In my opinion the cursed weapons are completely useless, maybe they had some intentions with them but never got around to do something with them, I don’t know.
Yesterday I did a test and crafted the Blackheart Hammer and gave it a mater weapon upgrade, It’s damage was 69 and armor pen 45%, that sounds fairly good, but it really isn’t…
In my hands I got roughly 40% corruption and it didn’t perform any better than any generic epic hammers, maybe even worse in some cases.
I gave it to my very best fighter thrall and took her to Warmaker dungeon and sent her towards the first wight boss, I took care of the skeletons and let her do the boss, but after a while I got a bit worried since the boss wasn’t dead, so I checked her health and noticed she was around 50% of her 6419 hp, I then hit the boss once to see how much damage he had taken, and to my surprise, he had barely taken any damage, So I gave her a dlc epic hammer instead and she finished the boss very fast, so my conclusion is that these cursed weapons are completely useless whether it is intentional or not

Well think we all need to look at the definition of curse, a curse is something that finder’s you, it’s not supposed to be good for you, why do you think all these bosses you get them off look so bad lol

Well think we all need to look at the definition of curse, a curse is something that finder’s you, it’s not supposed to be good for you

Thanks for explaining that.

On a more serious note, it’s basic game design: if a game element has a drawback, it’s for a reason, not for a lark. Most often the drawback is to balance out some other exceptional aspect of that element, so it isn’t overpowered. Sometimes, though, it’ll be just for comic effect, like The Bane in Borderlands 2.

Cursed items in Conan Exiles don’t seem to fall into either category. As others already pointed out, they’re comparatively underpowered, even without the corruption effect. And if the curse is supposed to be funny, I confess it went over my head.

Well, okay, maybe it’s a bit funny when you find someone logged out in the open on a PVE-C server and you make them wear a Black Feather Helm. But it’s not half as funny as dressing them in a lurid pink Derketo Acolyte outfit… 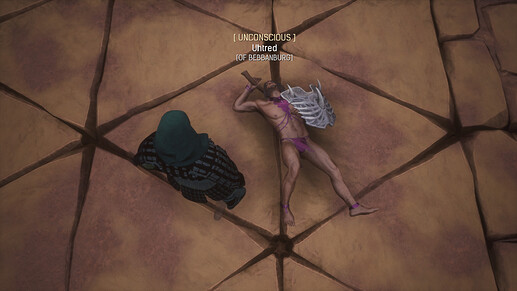 Well, okay, maybe it’s a bit funny when you find someone logged out in the open on a PVE-C server and you make them wear a Black Feather Helm. But it’s not half as funny as dressing them in a lurid pink Derketo Acolyte outfit…

Thanks for the laugh

It reminds me of the many times I’ve done something similar on PVP/PVE-C server when finding someone unconscious…
I’ve colored their armor, changed it to something else, filled their inventory with stuff like fx fish or rotten meat, I’ve also once in a while given them better armor and weapons, I just wish I could have seen their faces when they logged back in

I think you’re examples are why we have cursed item’s, so funny