DALINSIA VS BERSERKER who is better?

True - ive tested that with a low end named about 4k health and almost killed the Judge with Cira the Mad. She had epic gear and weapons.I didnt get involved till about half way in

It still depends on the player though.

This is why on another thread i voted for the officials to be set to barbaric level.

It still depends on the player though.

Whether or not they have a pulse?

I have a Nordheimer III that hit all the best perks, Universal Warrior +3 all over, Blessed at +15 on Vitality, and Born Warrior +3 on Vitality and Strength. I do not expect this to ever happen again, but she has 11000+ HP, destroys bosses, and I don’t have to lift a finger against the arena boss. She is truly the unicorn thrall.

in my opinion, it doesn’t make sense that t4s are less likely to get good perks. I hope this will be corrected in the future. they should be better compared to a T3. this game is illogical and full of bugs. when i try to capture a slave he often falls underground. (on a surface like the stairs)

Dalinsia has a better HP-to-Vit gain ratio and her 0.03 deficit in melee modifier isn’t really a game changer. Be it Dalinsia or Berserker, invest in the 1H mace for your thralls. A confessor crafted Tenderizer, or even just a Bladesmith crafted Obsidian mace has surprisingly competitive DPS compared to a sword of Crom. This is assuming all weapons have master fittings.

If you really want to get the most out of mace DPS for your thralls, get a Lian. Lian, Tarman, and Waros are the only open world thralls that complete their mace combos 100% of the time, so their DPS often exceeds the other T4 fighters of their peer tiers, and even the one above sometimes. Just remember to kit them in Heavy Vit armor and they’ll do their mace magic for you.

I just wanted to make a little debate so that everyone agrees on this. I wanted to listen your notice first. and then I would say what I think with proof later . thank you for participating in this discussion LETS CHAT !!

yes berserker and dalinsia are almost similar but dalinsia has more life is bigger vitality bonus. so the result is clear

the most beautiful fighters are T1. T2. T3. T4 fighters have lousy physiques. I prefer dalinsia because it is a T4. quite good in combat. (she is hard to find) . if you find it on the first try consider yourself lucky. and I find her name cute

the t4 characters has unique face and physique. unlike the T1. T2. T3

just a question (off topic). my fighter died for no reason. (I had this Bug 2 times). I once again thank funcom for the time wasted for nothing… when the fighter drops his gear and someone picks it up. what is the message that is displayed in the event log?.

I don’t think there is any message. At least there wasn’t in the past, haven’t checked lately.

And on paper Dalinsia is better, but as people state, for PVE after a certain amount of HP and Damage Reduction it doesn’t really matter anymore. After that high damage is better, but any decent damage thrall will get the job done.

For PVP high HP is most important. 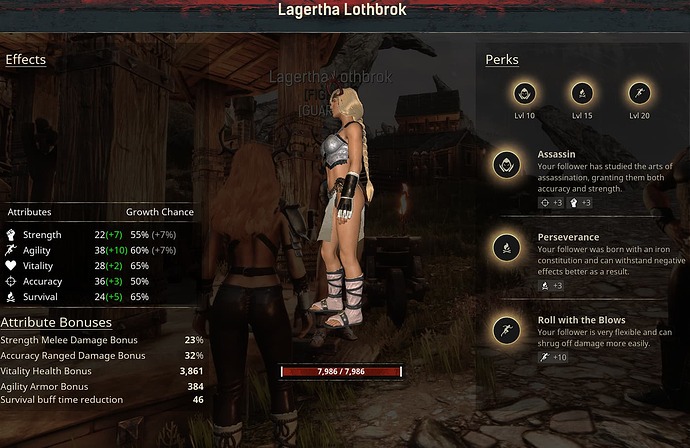 This is a relic hunter who talks and looks exactly like Lagertha, and has pretty decent stats. She literally has an accent. As you can see, relic hunters come in all shapes and sizes. 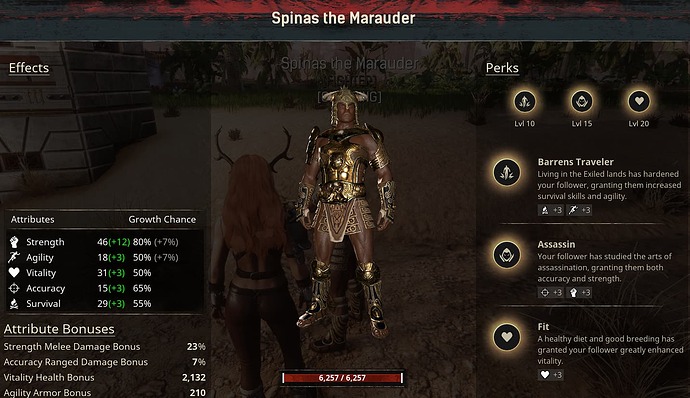 Spinas is a very good all around thrall, but not my favorite. He hits pretty hard though. 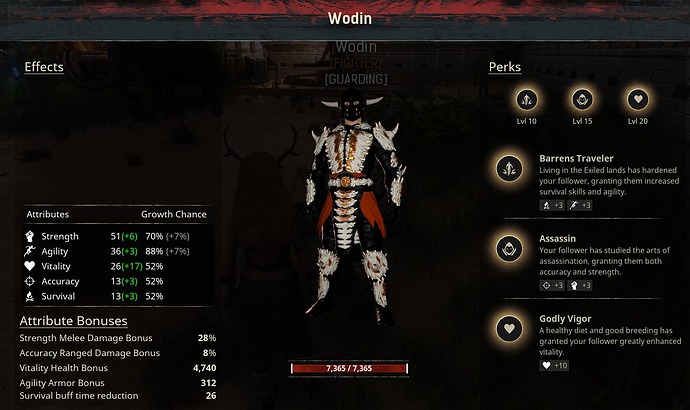 Wodin is actually a Janos that aquired amazing health from perks and has the highest base strength I have ever seen on a thrall myself. He is my fighter. 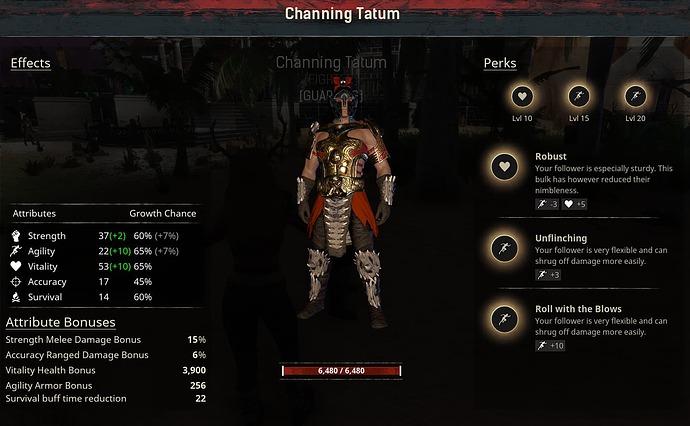 Channing is actually a Berserker, and one of the few I managed to level without getting major negative perks. 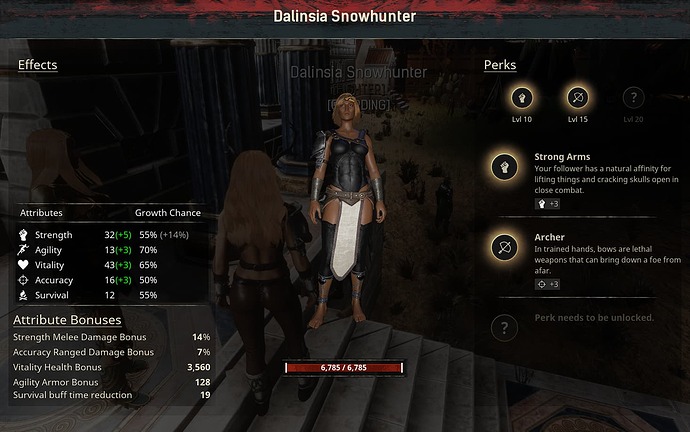 My first and last attempt at leveling this one. She takes forever and is prone to bad perks. 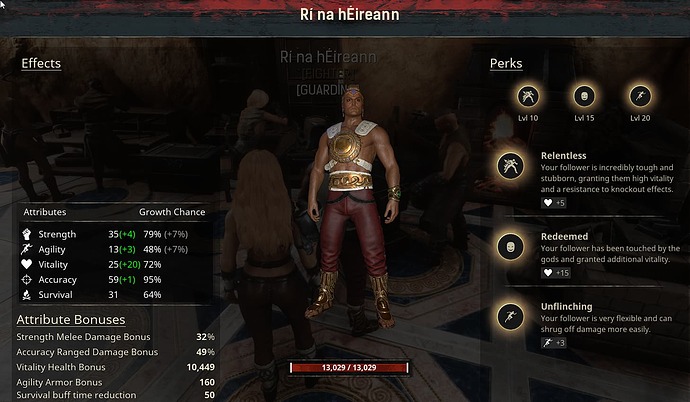 This is a beastmaster renamed, with 13k health.

Lucky you, you managed a 46 Spinas, omg he must hit like a train this dude. My best Spinas was 42

hey long time no see xD. your slaves are interesting. but I find that you quickly gave up for your dalinsia. and you play in pve server ?

thank you for keeping me informed. now I am stressfull xD

True, and if you add the time you need to level up a Teimos, he becomes the most precious pvp thrall.
Actually all the thralls have ups and downs, or pros and cons, you name it. At the end, the good thing is that every single biome has a key thrall to help you move on and dominate in pve.
I remember when lava was hurting thralls, berserkers and Dalinsia were dieing easier than Tugra that had only 5k hp, especially Berserkers were dieing at once. A lot of players Love Tugra and for me this thrall has a really special place in my heart.
When I started understand the game, I was farming Tugra, to help me farm Lian, to help me farm a Berserker, to help me farm a Dalinsia

. The old Dalinsia was something special to speak about, not anymore, not anymore. This is better however because we finally build warriors and do our fights…
Like @Taemien said something about blood circulation

, do your fights and don’t waste more time than neccecity in your thralls, they are expendable assistance, nothing more.

I play PVE-C, so my thralls are viable in PVP. I give up on any thrall that gets such poor perks like that and Dalinisia just is not worth leveling. Her last perk would have to be a +10 in health or strength and the odds are very much against that.