Funcom…I can be quick to stick a boot up people’s backsides when I’m displeased about something as I have in the past on these forums and I can be a bit harsh. I’m not going to apologize for that, I have certain expectations when I hand somebody money for a product and I have no problem speaking my mind whether it’s on a forum or if I’m addressing someone face to face. I’m a grizzled old Veteran and I wasn’t raised in a politically correct world.

That said, I can be equally quick to hand out praise and overall, I’m very pleased with what I’ve seen from today’s patch so far and I think some of the changes you’ve made are fantastic. Admittedly, I didn’t have a lot of time to look things over this morning, but this patch hasn’t left me putting the game back on the shelf until the next patch. When I have more time, I’m gonna fire up the game and putz around.

I did notice that the stuttering is still there. The frequency hasn’t changed, but it’s not as intense as it was. I would ask and hope that you guys take another pass at whatever you did to possibly eliminate it altogether.

I absolutely love that now we can return cupboards and work benches to inventory to make moving bases or just rearranging easy. Thank you much for that. I’m also quite pleased to see the improved carpenter’s bench and dismantling bench added and can’t wait to try them out. I’m equally happy about the Fragments of Power being added for more feats points. I’ve always felt that was lacking.

Enough rambling. I have things to do today. I’m looking forward to hopping in the game later and checking out more of the changes and improvements. From what I’ve seen so far, nicely done Funcom…nicely done.

Patch is amazing. I concur.

Looted some black hand armor out of a black hand camp. Equipped my dancer thrall with it.

Got some hardened steel after recycling all those left over weapons I curiously keep around for no reason. Cleared up alot of storage space.

My furnace, and cauldrons thank you Funcom. I am now able to stack a couple grand worth of stone in only 2 or 3 slots, leaving room for stone consolidate, or steelfire. This free’s me up from baby sitting my furnace, as I can now trust my thrall to do their job well.

Got combo’ed by a thrall. More than before. Nice. They also had nice weapons. Also nice.

I loaded into the game smoother/faster than normal. Not perfect, but it was better than usual, and I use a potato PC.

Simply from what I have seen in 15 minutes in the game, I am very happy.

I also noticed purge meter is purple, with text that informs me of my imminent demise. (Nice.)

Please keep on keeping on. This is a quality patch, more is needed, but I would consider this a home run as far as patches go.

Can’t wait to get back in the game.

@BigDave - wait till you wander about all the places you thought you were used to. The new beasties and npcs are a bundle of fun.

Been level 60 for ages, and now raiding New Asagarth actually feels dangerous and challenging again. Not to mention, being able to recycle the armor and weapons actually yields useful materials. This is great!

Seeing as how my Purge meter is almost full, think I better go place some more defenders and upgrade their gear if the increased difficulty is any hint as to what’s in store!

Great work, guys, and props for getting it out a full week before the free weekend on Steam. I was thinking you were going to play it safe and wait until afterwards (which, as a Sys Admin, is what I’d have been inclined to do), so bully for you on pulling it off!

Even in an area as benign as Fleshtearer Falls you’ll get a skeleton Purge with Undead Serpentmen. I built right on the falls above it and was hit on the plateau above and below the falls. Two Greater Crocs, Imelda and Ryu, saved my entire veggie bacon.

Mrs Jone’s cupboards are bare, she is in a frenzy.
Now I now why they call this entertainment.

puirges are not fixed, a friend of ours got purged today and we got naked darfari, also the purge wont advance with a knocked down enemy,

we also saw this : *that should not happen in a darfari purge

Here we go again!!!
Yesterday there was the biggest patch for Conan exiles in past half a year. And it was supposed to fix bug, glitches and bring some justice to those who exploit them or cheat. But today already some sneaky players found kind of a bug i suppose to dupl. avatar coins and they have been spamming them all over the map and destroyed every freaking base on the map. As far what i understood they don’t need an altar or anything. They just duplicate massively coins and go on a rampage for loot. So if u are an active player my only advice to you - SAVE YOUR PRECIOUS ■■■■ AND LOOT and try to find some hidden spot in the middle of nowhere or in other case u will be destroyed. Right now on our official PVP server 1331 been madness so far. Avatars all over the map. Don t even know where to hide. It’s only done by chinese players. So yeah again no respect to chinese players as always. Never play fair. Anyway if DEVS don’t do anything today tomorrow evening there wont be anyone left playing this almost dead game. I dont know how could you screw up so much to break this game even more?! Just sad… FUNCOM HEAR ME AT LEAST FOR ONCE AND DO SOMETHING! 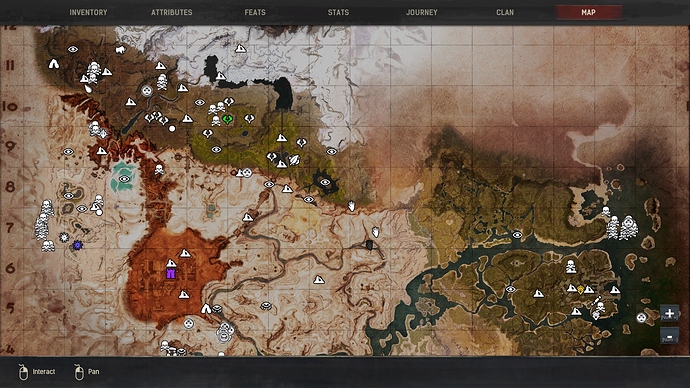 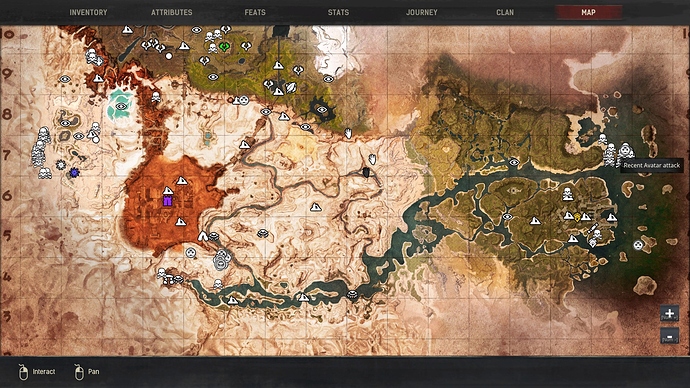 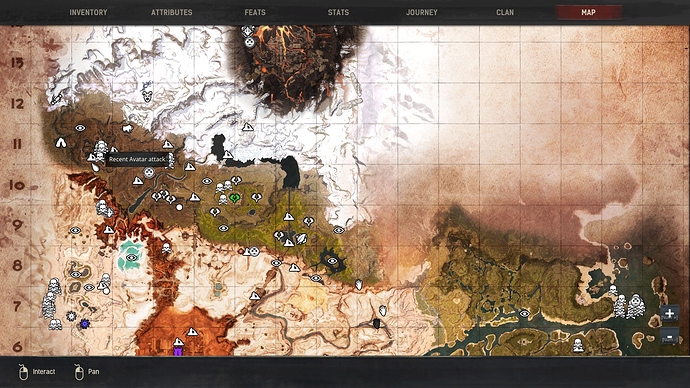 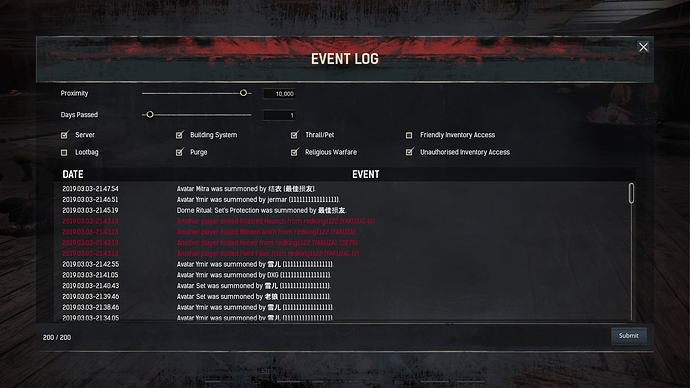 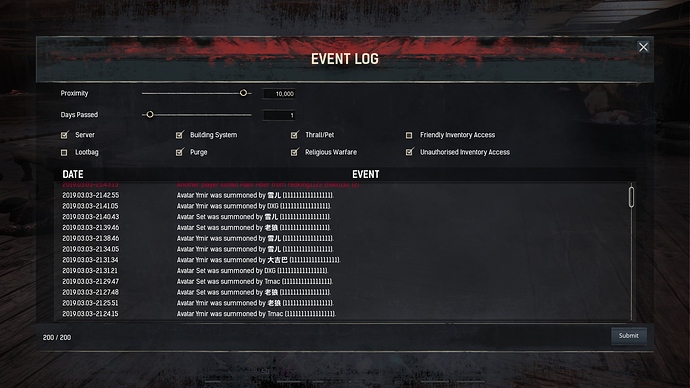 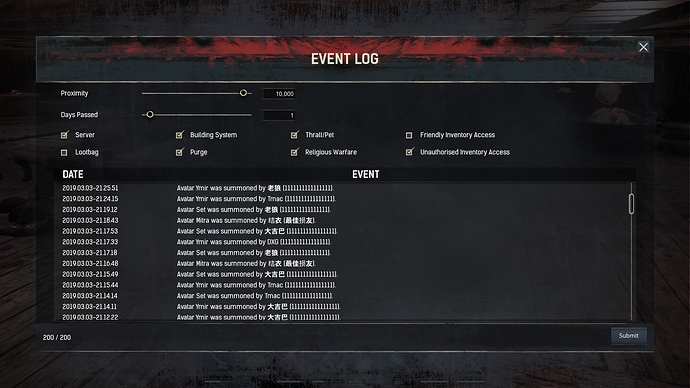 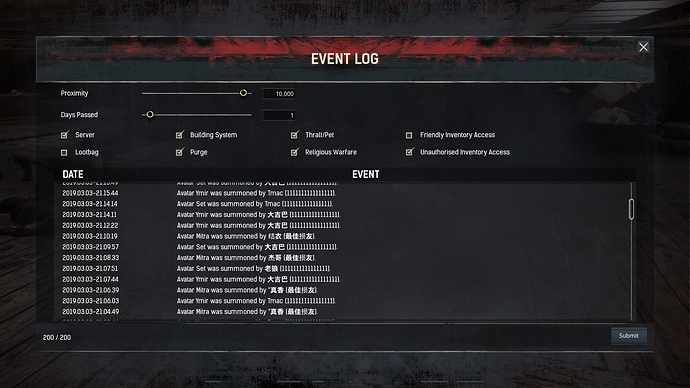 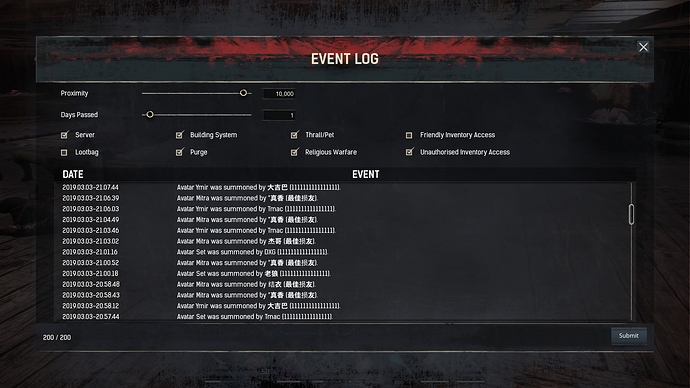 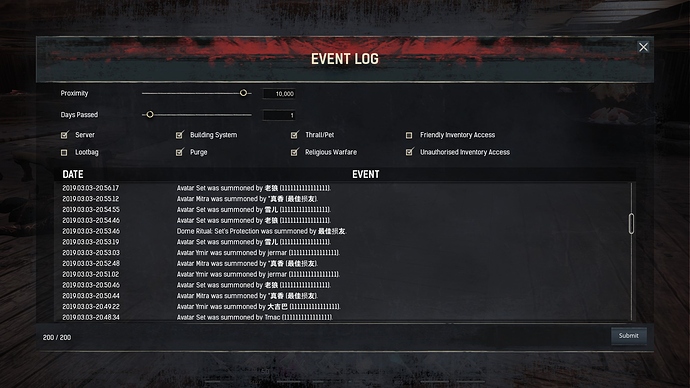 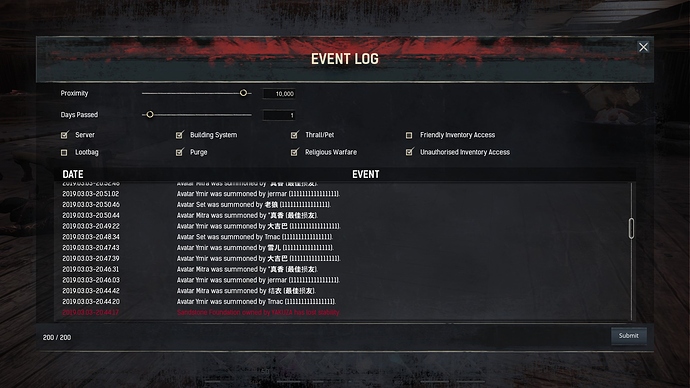 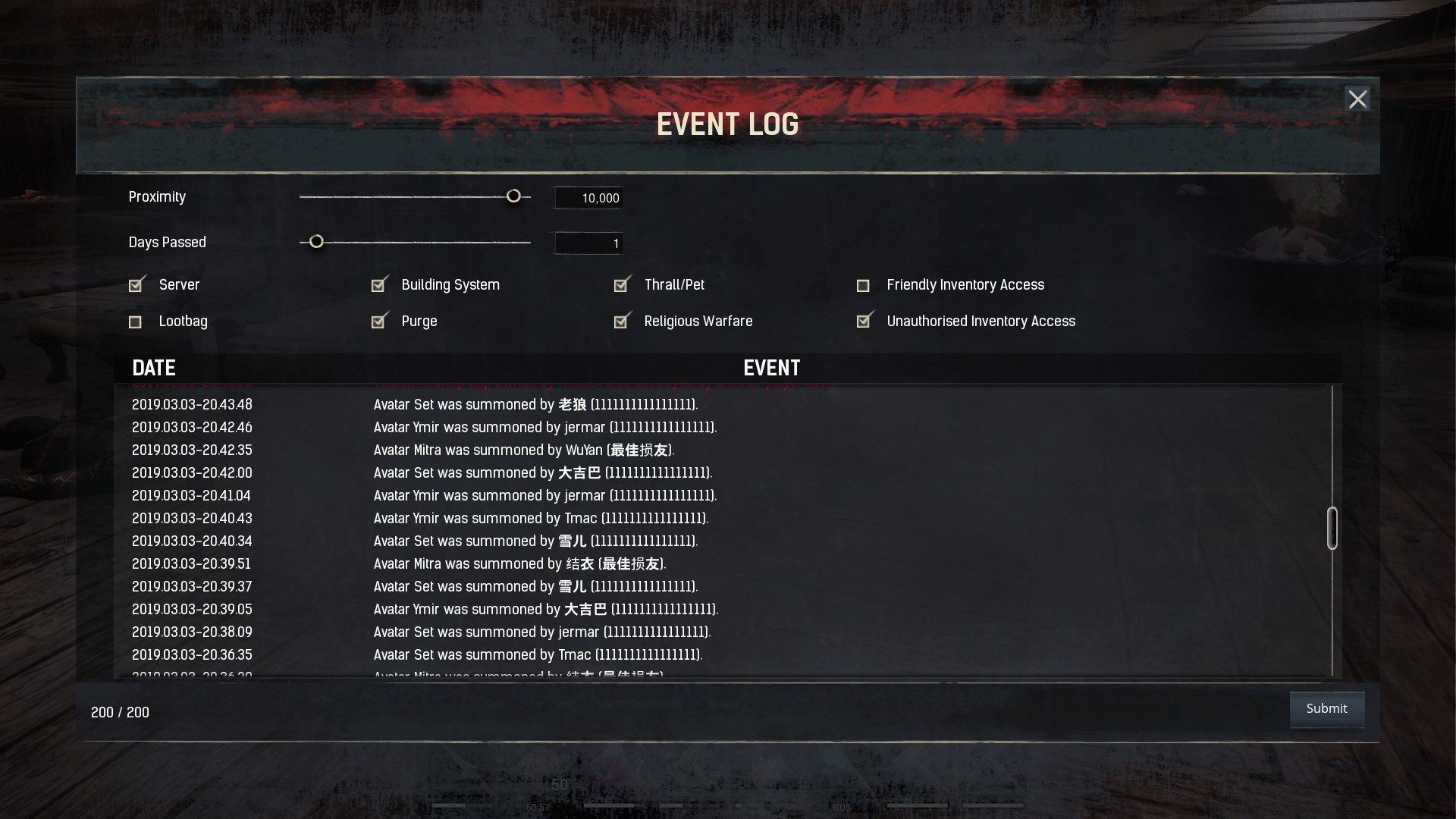 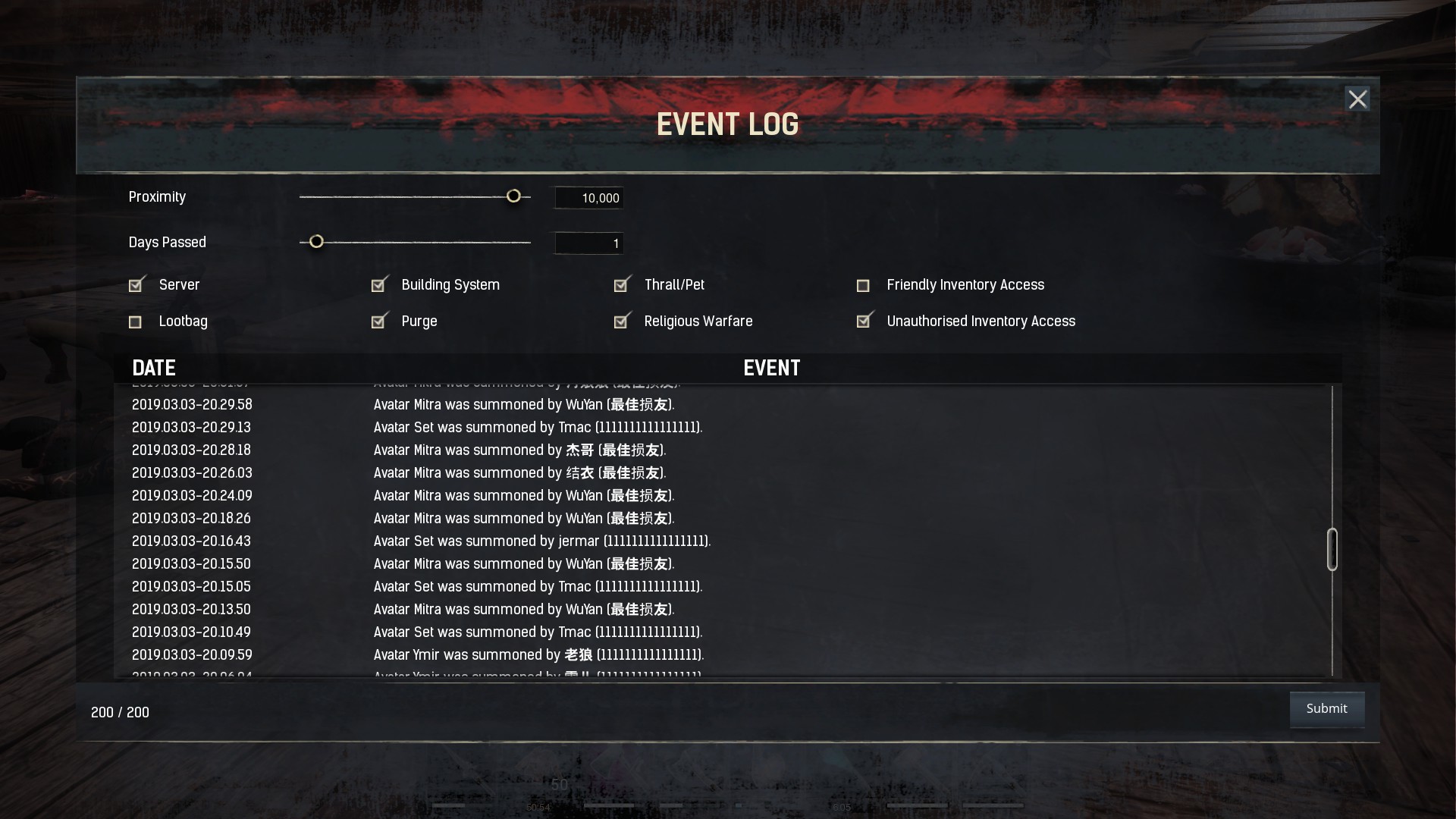 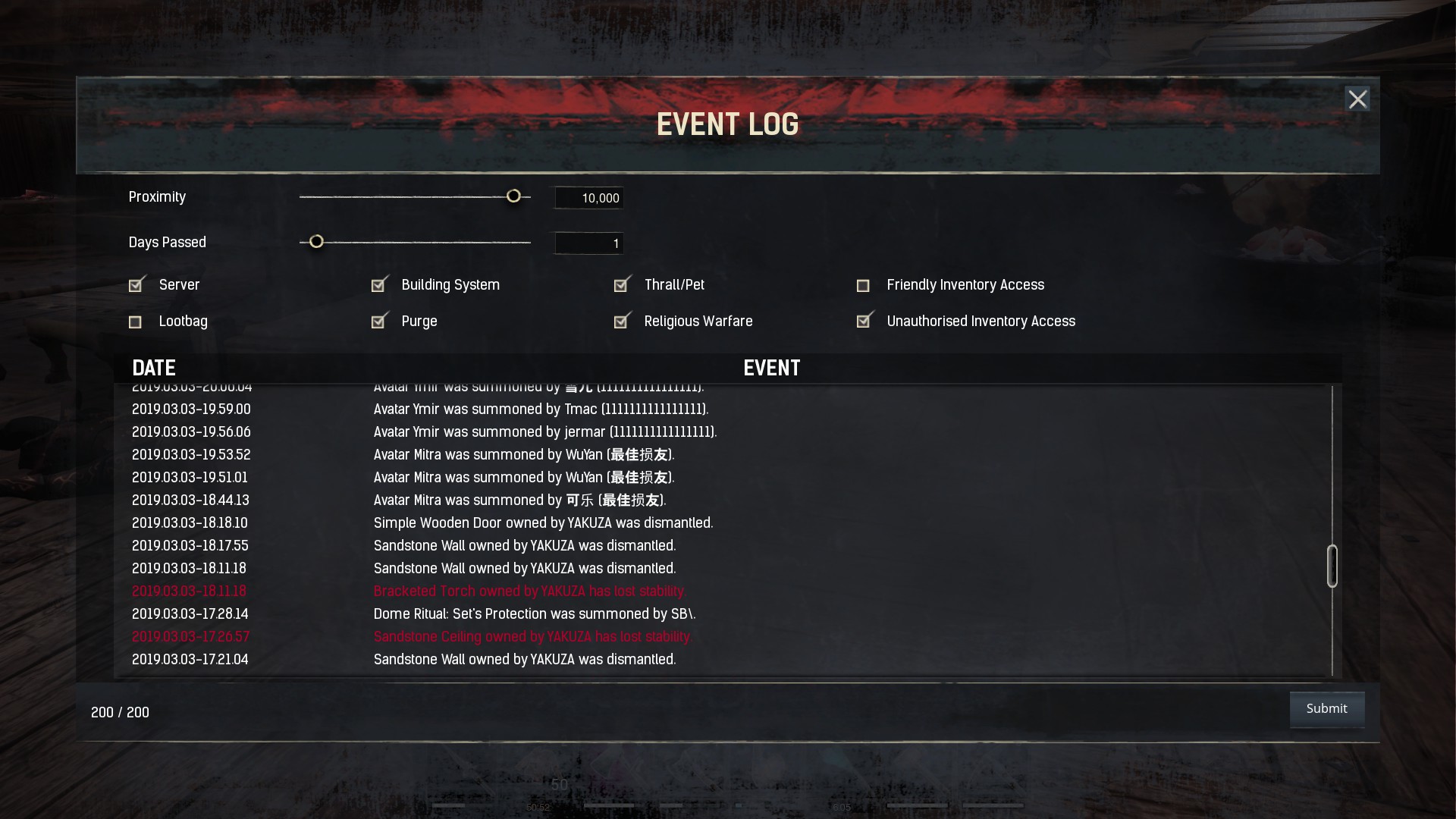 I think bugs have been found on TestLive, but cataloged and not reported, because there is:

This seems to be the new/usual post-patch PvP meta.

This patch though, for me has unofficially brought CE out of early access, from a game play mechanical point of view.

There is now an end-game loop. The feat points and legendary repair kit farm. I love it.
Purge now properly works and is dangerous enough to prepare for.

The bosses really kick my lost-legion geared blade of the adventurer equipped volcano thrall’s ■■■. I am convinced the dragon would have killed my thrall if I didn’t contribute as well. It was a worthy challenge.

I need some advise

Shields and shield block no longer works.
Throw them on a pile and burn them. I don’t care.

You are no longer able to stun sager or interrupt mobs.
Who decided removing crowd control a basic part of combat in the game from the game would be a good idea?

Mobs however can easily stun, sager, and interrupt you.
you have to reline on dodge provided you can.

that leaves sitting on a perch and shooting them in the head until they die.
So boring I would rather not play.

Unless some one can give me an alternative.

We’re aware of the streaker darfaris. It’s being addressed as I write this

i have submited a few more bugs over its corresponding forum , i will also submit some suggestion for funcom consideration.

thanks and happy sunday

@Tascha
Please don`t forget to add some variation because we are sick of Starved Exiled. Will the fix be implemented soon or on the next patch?

The fix to the Purge?
It should go on with one of the next if not the next hotfix. No concrete eta but as soon as possible.

Yeah. While stun lock was meh. I noticed I can’t stagger anything at all. Even with a kick.

I’m liking that the thralls using shields are a pain in the ■■■■ now. Thats pretty cool.

But I’ll bring up something that has been bothering me for some time.

Stagger!!! I am an archer. Stagger is essential to keep things slowed down. It does not seem to work on mobs.

Overall though this patch has made everything fun again. Im loving the extra content. I love having a reason to go to the unnamed city and make cleansing brew.

I love bearer packs. I love the new dynamics. Sure there are some slight bugs, but this is Much much more fun. Im really loving everything.

I’m confused if thralls actually need food or if pets really need food. I’m also wondering why I need beehives. I have tons of them.

The firebowl is now amazing.

Over all I am super happy about almost everything.

Also the loot. The loot is fun. I just got a black hand sail tent. I didnt know I needed that until I got one. I had to add it to my house…