Families in this game and having kids

Wouldn’t radiation from The Wall cause mutations and deformities?

And if they’re born, are they born with bracelets? Or could they go outside the wall freely?

Maybe that’s it. There already ARE children in the game but kept underground till they’re old enough to leave. Those chests that refuse to open even though you DO have the key… the secret entrance to the underground playground and nursery!

Let me see if I understand you. If a game (for some insane reason) had an option to enable killing virtual children, you would be a person who’d opt into that?

Based on the absurdities of the crimes we all were convicted of, it is very possible that your entire family was sent to the exiled lands.

I mean, yeah, but I really don’t wanna go around each camp where I slaughter adults for the loot, shrine fuel, or purge meter increase, and worry about hitting kids

It’s a game, you should be able to choose to play it the way you want and don’t get me wrong I’m not a person who enjoys watching children die…

I think I agree with Jimbo but there’s no doubt someday very soon this will all be a thing. CP2077 and several other shoot’em-ups have kids in. It won’t be long now till they’re fodder too.

When it happens tho it’s going to be really embarrassing when some NPC kid kicks you ass.

i don’t see what added value children or families would have in conan exiles. in the case of children, almost all game mechanics that apply to other npcs, such as knocking out and killing, would be omitted. so they would be invulnerable npcs that flee like fawns. what exactly would that add to the game?

from my point of view, children and families are only relevant in one scenario, and that is role-playing. but to integrate invulnerable npcs for that, which offer no added gameplay value? no thanks

Oh, OK. It’s your character who wants to kill children. You just want to role-play a child killer for normal well-adjusted reasons. Fair enough then.

Seriously though, this is a mod thing. If you can’t see that, I don’t know what to tell ya

This is not as good an argument as you seem to think it is. But I don’t think the forum would like it if we had a philosophical debate about how to weigh the value of human and animal life.

CP2077 and several other shoot’em-ups have kids in. It won’t be long now till they’re fodder too.

I dunno, I seem to recall that it’s illegal in most places to depict the deaths of children in media or games, unless it’s integral to the story. So laws would have to change first. There’s a reason that being able to harm kids is a mod thing in Skyrim etc. 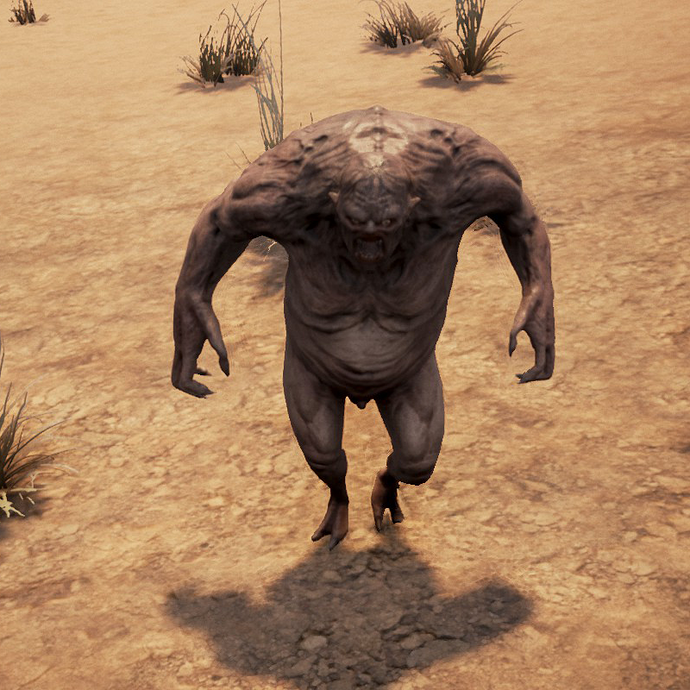 An Imp is a creature in Conan Exiles. Imps look like a corrupted and degenerated version of humans. Their neckless heads are deformed and asymmetrical as they throne on a bulky torso with thin arms and legs. Imps have large aggro range when facing...

CP2077 and several other shoot’em-ups have kids in. It won’t be long now till they’re fodder too.

I dunno, I seem to recall that it’s illegal in most places to depict the deaths of children in media or games, unless it’s integral to the story. So laws would have to change first. There’s a reason that being able to harm kids is a mod thing in Skyrim etc.

Yeah, remember Quake? Not even Q2, Q3a, but the original… People freaked out about screen violence. The planet almost ended, people rioted, laws were passed, unions were formed, dogs and cats formed alliances, life as we knew it had officially ended. Now we don’t even notice and can barely even make out they’re even humanoid in form.

And remember GTA, not any of the sequels but the original GTA version one. People freaked out again. You could interact with prostitutes and steel cars and run them over with the same car. The world ended again, more laws were passed, “anti” associations were formed, the dog and cat alliance invited lamas to join, and life as we knew it had once again ended. Now people complain if you can’t steel a car in such a game, it’s considered fun to mow down fat ■■■■■ in the street, and we can see bobbing heads for the prostitution interaction - and of course it’s just natural to stab them after and get most of your money back.

Killing polygonal kids in games… I dunno when but we will be seeing it.

Moderator… I really regret posting this dumb post. Please close this thread or get rid of it.

Why? I think it’s relevant. As a customer and consumer I think we should discuss these things. It’s healthy. “Sunlight is the best disinfectant.”

This is gonna be locked soon I know it. I feel like every thread I comment in at the moment gets locked soon afterwards

Killing polygonal kids in games… I dunno when but we will be seeing it.

Eh, you could be right, given a long enough time frame. I doubt it’ll be soon though. For a few reasons.

Firstly, yeah I remember those games. I was a teenager in the 90s. And a kid in 80s when my friend’s grandma took away his D&D books because of “the devil.” I think you’re exagerrating though. They way I remember it, it was always a lunatic fringe who freaked out about that stuff. I don’t think laws even were passed, except to give video games censorship ratings and bring them into line with already existing media. Most people thought it was a storm in a teacup.

Laws against depicting casual harm and exploitaton of minors are older though. They’ve existed for decades afaik. Because everyone except child predators and edgy teenagers implicitly understands that there is a line that cannot be crossed in that regard. Cross it, and I suspect we’ll find the silent majority is a LOT more squeamish about virtual children than they are about virtual “humanoids” and “prostitutes.”

Also ironic btw that the collapse of standards over time you’re describing is exactly the sort of decadence that REH despised, and that is anathema to Conan himself.

Just an aside, unless Toth Amon modified the bracelet to be a contraceptive, that would be a negative.

In the Unnamed city there was a Lorestone encouraging slaves to breed as the Giant King’s always need more slaves and sacrifices. As the Lorestones can Ionly be read by shackled humans, the original model bracelets didn’t curb human fecundity.

Would the new master of the bracelets chose to change it?
Possibly. Children are, after all, a distraction and nuisance. On the other hand, they are excellent hostages and tools to manipulate with. Ultimately, this one thinks he would of he could. The motivation of escaping the Exiled Lands decreases as one embraces their “new home” and a family can anchor a person to a place, especially if a route to survival or prosperity is apparent. That doesn’t impel people to frantically scour for the means to escape.

Wheeling back to the main topic at hand, while it could definitely be interesting… This one finds the overall implications less savoury that most already present in game.
Also, we all do know how long it takes to make human progeny and how long before they grow through different phases of life?
Even with the acceleration of the day night cycle in game, it would still be considerably longer that breaking a named thrall with no driver (would we need a new thrall type, a Midwife, to expedite pregnancy? Or perhaps just shove an Alchemist there?) and who is ready for that time investment?

No worries. It was a good topic to discuss.

I think you’re exagerrating though.

Me? Never! The Dog & Cat Consortium really did invite Lamas to join! It’s a historical fact!

Now as far as having kids go…too much like Skyrim, IMHO.

Yeah just go play Skyrim. There are so many mods for it.

People know it’s a game. I think the issue is just that most people don’t want to kill human children in their games.

I could just as easily say that you can’t tell the difference between games and reality. Because you think being able to stomach taboo things in a game somehow makes you mentally strong, and people who don’t want to are soft. But being able to shrug off bad things in a video game says nothing about your courage or mental strength in real life. Games are safe.

Look, most people think humans are more valuable than animals. Otherwise we’d all be vegan. Most people don’t want to play a game where they harm children. Most people expect children will only be harmed in fiction if it’s important to the story, not just because. If you don’t agree fair enough but all the clever arguments in the world are unlikely to change anything. It’s human instinct to value our own and protect our species young.

Exiled lands is no place for kids unless we can offer them to Crom.

Sorry this has gotten dark lol

I didn’t want to look “hardcore”, I just don’t mind having children ingame.

And that’s normal in life. But ingame, I don’t care if it’s children, or old guys, circles, anything.
I don’t think it will be implemented tho, but shows peoples stances towards “taboo” things.
I meant soft is soft, because people are against things that would fit in the game, this shouldn’t be a moral question, it should rather be technical/lore type of question. Just my opinion.

A bit off: my “stoneheartedness” probably comes from the fact that humanity destroys the planet, not animals, and I rather keep my dog alive than a random person I don’t even know existed in the world. Extreme overpopulation, deforesting, air-pollution (and making the oceans acidic)…

Not everyone has common sense…

Mortal Kombat 11 is the latest installment in the critically acclaimed franchise, providing a deeper and more personalized experience than ever before. The all new Custom Character Variations give you unprecedented control of your fighters to...

“Mortal Kombat will never appear on a Nintendo product!”