Fighter thrall as an Archer?

So with the new thrall leveling system, I have a named fighter thrall, Black Hand Captain, where his first perk is ‘Deadeye’ - an Archer perk and hurts melee. His accuracy is also 52 at level 11.

By all measure, this guy could be a decent Archer and not the ‘fighter’ his designation implies.

The question is, should one use such a leveled up fighter as an Archer, am I missing something, some stat or fighter class distinction, where one should not use him as an archer?

I had one last Captain stashed away in a box … and she suffered the same fate. High accuracy rating and also got the deadeye perk too. I was sad.

So I’m curious to hear about this too !

It might have changed though but untill proper testing is done i wouldn’t use a fighter as an archer even if he has good accuracy stats.

I have a bearer who’s a pretty good fighter. She helped me defeat some pretty tough monsters over by the Black Galleon when I was just out exploring…

I have a bearer who’s a pretty good fighter.

Mine is too and quite tanky with food on him. That thralls are so much more powerful than we are is kinda jank, however…

In any event, I do still want to know how the Fighter / Archer thing breaks down with the new perk system - my original question…

I spawned my first named thrall since the update last night, Tarman, and he also spawned with high accuracy bonuses and really low str/vit. I’m hoping he is not going to completely whiff at melee but I haven’t tried him out yet.

The only honest answer I could give you OP is, put a good bow and arrows in his inventory, find a perch at swagger rock and see how long he needs to pop elephants, tigers and Rhino. By rights he should be a beast of an archer with those stats.

I think the reason thralls are so OP is because they’re your base’s only defense when you’re offline. Some people can be online every waking hour, but some people have jobs and school and so can’t always be online during raiding hours during the day to protect their bases.

Especially if you’re a kid. You’re got dragged to Aunt Mabel’s house last Saturday afternoon for a cookout, and you have to go to you second cousin’s birthday party next Sunday morning (she just turned 2 last week and said her first word, how cute!).

I have noticed that every relic hunter treasure seeker (fighter) we capped and tossed in a box has also spawned with archer stats post patch. I cannot help but wondering if they crossed wires and gave archer stats to fighters and fighter stats to archers. I am currently taking a break hoping for changes to the movement system, but I would suggest trying to find an equivalent thrall to the fighter named archer and see if the stats were flipped, and report it as such =D

Most Factions have a difference between Archers and Fighters regarding Base HP and HP per point of Vitality. Their Armor value however is pretty static between the two. I would like to assume that Archers also had a modifier which gave them better ranged and worse Melee, vise versa for Fighters, and it seems to my clan that when we take either one out that if we give the Archers the same weapon as the Fighters they don’t seem to kill as efficiently, but that is extremely subject to perception bias and not at all a good way to get data and make a decision.

Some Factions get much higher Strength initially, such as Nords and Lemurians, while some get higher Accuracy such as Black Hand and Relic Hunters. However if you assume that different Factions have different Base Damage and different Classes may do better at Melee vs Ranged (which is how it should be), then it makes it almost impossible to pick which thralls are actually best.

We have a number for Strength that correlates to a percentage increase, but a percentage of what? A lone percentage is absolutely useless, we need Base Damage added to the Stat screen.

I come back after a few hours of testing.
All was tested on official server PVE PC

So there is NO difference between classes and i assume it’s only true about thralls from the same faction and the same tier/ level.
i did only check for relic hunters, so i cannot speak for other factions but it’s very likely to be working the same way…

Then i wanted to check how impactfull were those attributes our followers are gaining at each level up.

i took a relic hunter treasure seeker archer level 0 with 20 in accuracy.

The damage dealt was very consistant all apes were going down at the 5th Arrow
here is a screen on how much health the ape had left after the 4th Arrow: 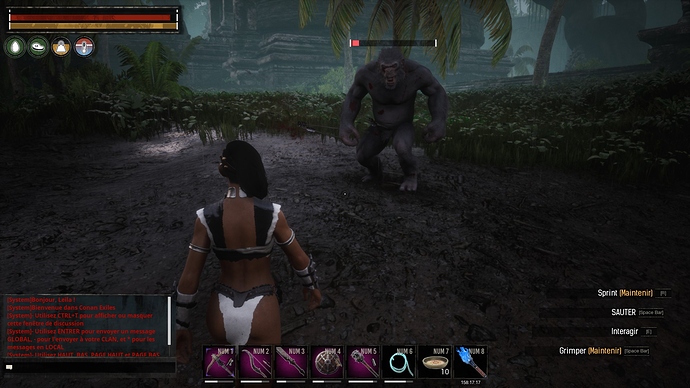 So you would expect that with like + 10 accuracy this ape would go down with 1 Arrow less, right? 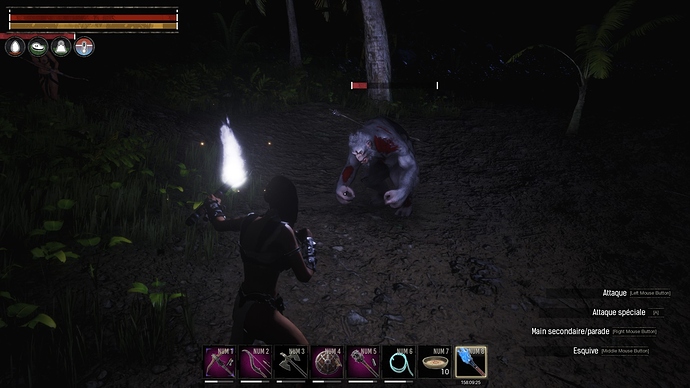 The ape is still alive after the 4th Arrow, and even worse: he has more health.

So i have no idea if there is some kind of hidden bug or Something, but from what i saw today, those attributes Don’t make any difference, at least regarding accuracy as i cannot speak for the other attributes yet.

You Don’t see my follower on the screenshots but she’s here doing the damage. The only thing my character does is giving 1 punch for starting the fight and 1 last punch in the middle of the fight in order to see the health bar again.

And in case you want to compare with your own experience, my follower was using a voice of derketho bow with master weapon fiting.
Outfit: derketho religious robes
Arrows: NONE
Food: only one piece of fish for the accuracy increase chance

Sorry, if this is outdated, but my last information on certain warmaker weapons like Bow of Derketo is, they are bugged for thralls!?

I have several named fighters and named bearers that are leveling up more as archers. I am not sure if this is by design, but so far the majority of my “fighter” thralls have stats/perks that would be better suited for archers. These perks are even lowering Strength and raising Accuracy. To say the least, this is not what I was expecting when I am specifically trying to catch fighters.

I think the reason thralls are so OP is because they’re your base’s only defense when you’re offline.

To remedy , our land claim should effect their atts. Say they are half what they are now when on follow, and when on your land claim they are like they are now. that would allow them to be defensive, and not too OP when out using them to explore. just my 2 cents.

So are we saying that we can give a fighter a bow and no arrows and they’ll be able to fire unlimited basic flint arrows just like an archer would? If so, I’ve got some roster substitutions to make tonight!

weapons like Bow of Derketo is, they are bugged for thralls!?

It might be the case Indeed. i can’t say for sure but my follower was apparently not truly getting her accuracy damage bonus.Although the bonus was showing up in the attributes list it seemed it was not applied at all during combat. It might also well be an other bug though, i Don’t know.

I did some further testing with the redmother bow and the splinter bow.
And this time my follower got the expected damage bonus from accuracy.

I am relieved to say this attributes system seems to be working as intended as i did some other testing about melee damage with fighter too.
It may have been already cleared for you guys but for me, it was NOT, especially after my last session with the voice of derketho.

Per latest dev stream, thralls do not have a preferred weapon. IDK if that translates to lowered damage on fighters with bow, and vice versa, but from a utility standpoint, you should be able to use them for both… i know i do.

The question is, should one use such a leveled up fighter as an Archer, am I missing something, some stat or fighter class distinction, where one should not use him as an archer?

Now i can finally answer your original question MagnumPCI

YES you should use your fighter as an archer.