[Describe the bug here]
Whenever I log in, I am always floating above the floor with arms and legs flailing. If I move in any direction, I do move but don’t walk or run, just hover my way there. Extremely annoying as only a relog seems to have any effect. Happens with most initial logins

You can also leave render range and return and things will work fine. A few of us were trying to troubleshoot this, but after I upgraded my hardware, it stopped happening to me. So it may be somehow related to hardware or load times, or something along those lines.

@bbtech Thanks. I don’t think it’s my hardware as it’s a brand new system and should be more than capable of handling the game. possible load times as when I relog, loading is much faster than when I first log in.

My hardware is way above spec for this game and it does this for me once in a while. Some times leaving the cell for a bit fixes it , most times it does not, some times a server reboot will fix it, some times it does not, it seems to be ■■■■■ ( are you kidding w.i.l.l.y is a bad word , wow we are all grown ups here right lol ) nilly on when it happens and again on what fixes it. It seems to have a mind of its own to be honest and comes and goes with no cause by player, it seems also be happen mainly on log in as if the game is not fully rendering the collision on the foundation meshes and it only ever happens on foundations for me.

@heaventhere Thanks for your response. Yes, I’ve only experienced it in log and I’m 95% sure it’s only on foundations too. I will have to try standing on something else when I log out to make certain.

It happens with any kind of building, in my experience it’s more common when the game has to load lots of buildings, reloging or taking a trip away from your base helps, as this only happens to me at login.

It only happened with foundation pieces for me also. More often with DLC foundations, but sometimes with vanilla. But others reported it happening with ceiling pieces too.

I don’t think it’s my hardware as it’s a brand new system and should be more than capable of handling the game.

Are you running the game on a HDD or SSD?

I used to uncommonly experience the bug you’re describing at least 2-3 times a week. But once I switched to SSD, it went away.

I have a hypothesis that its a loading issue. Like you load into the game before the assets are done. The bug in question is the server placing your character where you need to be. The image of the foundations is loaded. But the physics of the foundations did not load.

So the server sees you falling through and puts you above. Your client sees nothing for you to stand on. Your monitor shows you on ‘something’.

This isn’t to suggest everyone should run on SSD to avoid this issue (though SSDs are just best for gaming all round), but if this is the case, it could give Funcom a heads up on how to fix this issue.

Well, if we’re going to make this a data collection thread, then I’ll go all in. My previous machine used a Western Digital 7200rpm HDD powered by an AMD Phenom II quad core. My current machine uses a Western Digital NVMe SSD powered by AMD Ryzen 7 3700x 8 core. These screencaps were taken by myself and another player when I was still experiencing the issue. The server type was online private Testlive. I’ve edited the screencaps for privacy, although the other user will probably see this and probably won’t care, but I don’t feel that’s my decision to make. 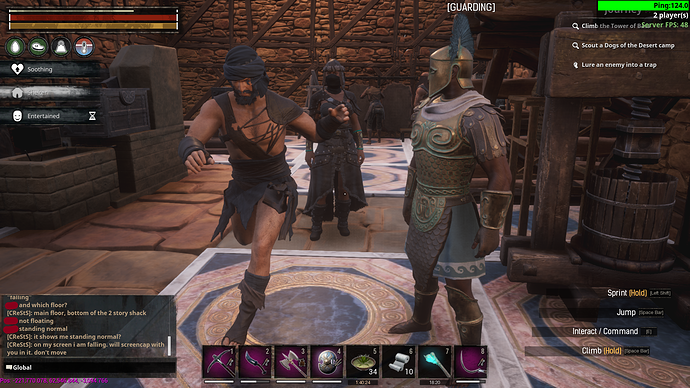 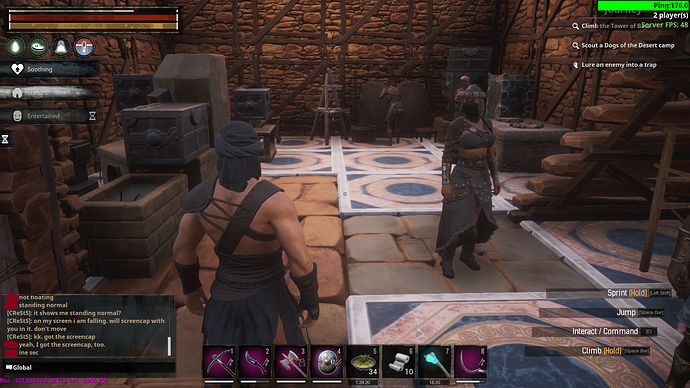 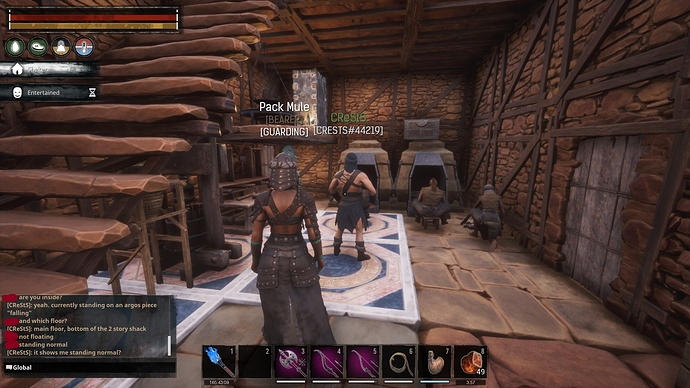 The following are the notes that I had taken when we were still troubleshooting it. Hope it helps:
Private dedicated server, testlive, but revision was the same as live.

The bug happens at most one time after server reset wherein the player is standing on a foundation piece, but is displayed with the falling animation as if the foundation piece underneath them is not being fully recognized.

Tests to date indicate that it is client-exclusive, meaning only the player falling can see him/herself falling. Other players will see them as normal.

Current tests to date show it happening only on the structure the player spawned at upon first login after game start. Separate buildings within the same landclaim function normally. After leaving render range then returning or after a relog only to the main menu, all foundation pieces function as normal.

You can also leave render range and return and things will work fine.

Sometime, I have had to reboot whole server and it still happen, then after a second restart it work correctly , it is not always a fix but its always worth the try.

It’s not a server error, it’s a render error. It’s akin to logging out on a placable and dying on login. At times the render is not synced and the solution is to leave the area and return / never logout on a placable.

Occasionally I get all floaty and zen on logging in first time. I just hop back out to the main menu and back in and it’s fine. As already suggested, it’s render range. I am guessing the base may be on the large size? Although I have not personally tested it, I seem to remember seeing that the volume of stuff you have stored in chests and vaults will affect it too (correct me please)

My post-patch ping for my private servers (not on g-portal) jumped from the 50’s to the 90’s and would keep stacking upwards per day the server was not restarted. After that last hotfix, this seems to have stopped and the norm is 50-60 ping rate. This morning one server showed ping 22 - but the game crashed soon after going in. The ping revised to 62 and then no further issues.

The new Live checking is making things difficult, and has been reported and is likely being looked at. Many players have been forced off the game depending on where they are - some countries have very slow network speeds compared to the US/UK/EU/Asia and I guess they will be heavily affected and lags are just too disruptive.

Let’s see what happens once the Summer vacations are done and FC are back ‘in office’.

@Grymm Yeah good point. I agree the new live checking is making things difficult; I usually have a ping of 40 ish but on several occasions I have not been allowed to log in because it says my ping is too high (I noticed once it was 180 something). As you say, they are aware of this issue: let’s see how it’s dealt with.

@PhilC007 And I have been noticing, for who knows what reason, the ping rates have been coming slowly lower and lower - got 34-ping yesterday. Could be based on overall players - I have no idea. Could also be some jiggery-pokery being done by hots companies and funcom.
Could just be coincidence. Two of my players stated they were ‘stopping playing 10c owned games’ and they moved on. No loss there in my opinion - their base-building was 'orrible