While I agree with you, Golden, since I have no idea of what you are designing, I am missing the point.

Good first time report, BTW, and welcome to the forums

First off, I assume you are talking about Fence Foundations, which, in general, are placed and connected on the ground, not necessary for a Foundation, wedge or square. I also assume you have a specific aesthetic in mind.

This, I think, is what you meant … 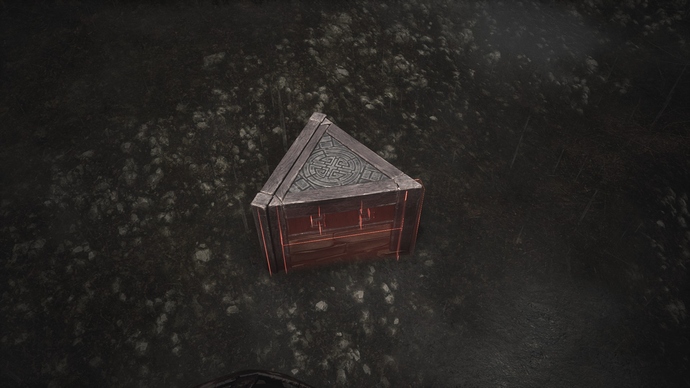 In general, again, Fences are attached to Foundations, regardless of type. Shown below are three Fences attached to the same Wedge Foundation. 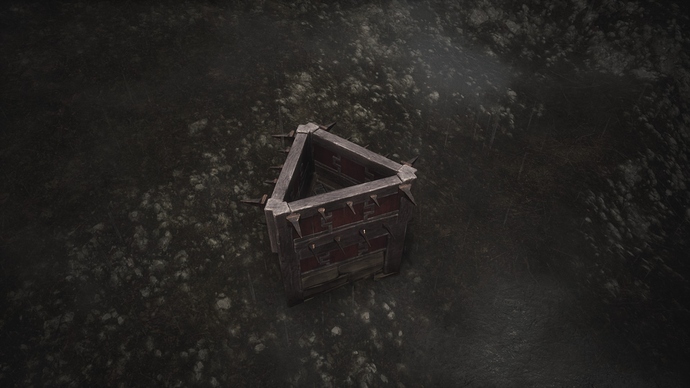 Is that the aesthetic you wanted? If not, please elaborate.

Welcome to our community.
Additionally to what @Jim1 said, we introduced a few limitations to fence foundations, bringing them closer to what their initial design was as they were used widely in exploiting.
Apologies for the frustration and thanks for your feedback.

They do, but fence foundations are the ones most dramatically affected by these changes, with one of their sockets completely removed.

While i understand well why this happened and we have now this restriction, i can also well understand the frustrated builders having still less options. It’s often a hight price some have to pay for some cheaters, mostly on official servers unfortunately.

While i play mostly on privat servers or in singleplayer where i can use all mods i want, mods that gives me more building freedoms are still in my modlist of course. They give me mostly the freedom back i was used in EA.

First, thank you all for your replies.

Yes, that first example is precisely what I’m describing. Not the “fences” but the “Fence Foundations”. I had 2 sets of 2 pairs of wedge pillars that I was using as my main supports for the building I setup with the fence foundation pieces on each side of the “triangle” shaped wedge; plus I had them stacked at least 4 or more pieces high as i was laying out a multi-story structure.I understand the change made and why. That’s not what bothers me. What I’m frustrated about is the fact that I already had a design pattern setup on my base prior to this patch that was working and had been working on other areas of my structures and went back to continue my design pattern post patch to resume building that part of my base.

I did not discover that I was affected because the patch didn’t demolish what I had already setup (not that I’m complaining about that per se) so I had no idea that the patch had an affect to this particular building combination. Then I went to continue on that specific part of my base and then ran into this limitation. At first I didn’t realize the reason behind this so I ended up demolishing many surrounding pieces because at first I thought I had ran into one of many of the other frustrating (but work-aroundable) building quirks to get what I was trying to do to work. At this point I’ve simply changed my design pattern and for the most part have adapted around this restriction; and have made sure that I don’t dismantle the building pieces I already have setup like I had it.

“Fence Foundations, which, in general, are placed and connected on the ground” - First, although I am on a PVE server and having more HP on my structure is really only useful for purges, I like stacking the fence foundation pieces against Foundations (both square and wedge) as an aesthetic choice as I like the more aggressive look with the spikes (I’m using the T3 Re-inforced Stone pieces).

“bringing them closer to what their initial design was as they were used widely in exploiting” - How is placing the Foundation Fence Pieces on each side of a wedge considered an exploit when the game allows you to do that with the square shaped foundation pieces.

I have come to the conclusion that the restriction may have something to do with the angle in which the fence foundation pieces would overlap on more than one side of a wedge foundation compared to a square foundation.

I would likely be more forgiving of this limitation if there weren’t so many other “quirks” in the building system. I’ve gotten my Brother to play the game and he likes building things but is less forgiving and has less patience for these things than I do. The only reason I haven’t quit playing outright is because the amount of time I’ve spent on building my structures. I often will “practice” on my solo game with the admin console turned on to test out my design pattern and then when I figure out what works, I try to duplicate it on the public server.

I really like the game but I wish the Devs would spend more time finishing some of the changes they have made: like with the feeding of the thralls or the non-necessity to do so and how placing a stack of food in a thralls inventory causes it to be consumed.

Anyway, I’m going off on a tangent. Thanks again all for your replies.

We’ll reconsider rewriting the new placement rules so they can be modded once we’ve found and verified a way that will not open the gates for abuse. We think in this case, and at least for the moment, it’s the lesser evil as the exploit the new changes covered was devastating.

I really like the game but I wish the Devs would spend more time finishing some of the changes they have made: like with the feeding of the thralls or the non-necessity to do so and how placing a stack of food in a thralls inventory causes it to be consumed.

Ignasis has stated a few times that this is a system they are actively working on improving. 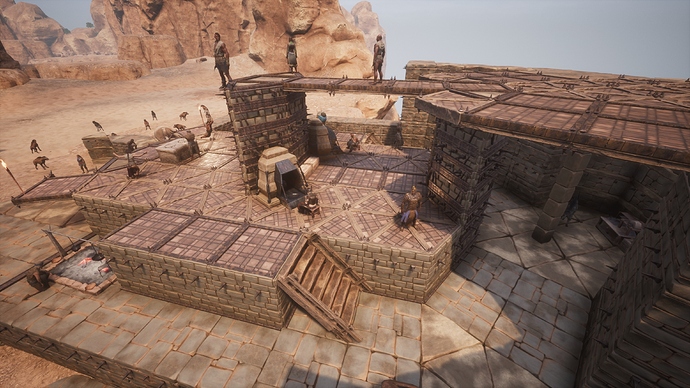 You can see the wedge pillars I have setup just to the left (behind) the closest improved furnace; if you look at the top in between the 2 thralls I have placed, you can see the tops of the Fence Foundation pieces that I have placed on each side of the wedge. I have the same setup on the 2 separated wedge “pillars” to the right where I have all the wedge/ceiling pieces attached. I had these setup prior to the patch and they remained afterwards. If you look to the left of the first stack I mention; the start of the pillars just to the left of the improved stove. You can also see the tops of the Fence Foundations on all sides of the wedge foundations. Again that remained. Just prior to creating the report, I had tried to continue building on top to match the other 2 sets I already had setup and that is when I ran into the limitation. 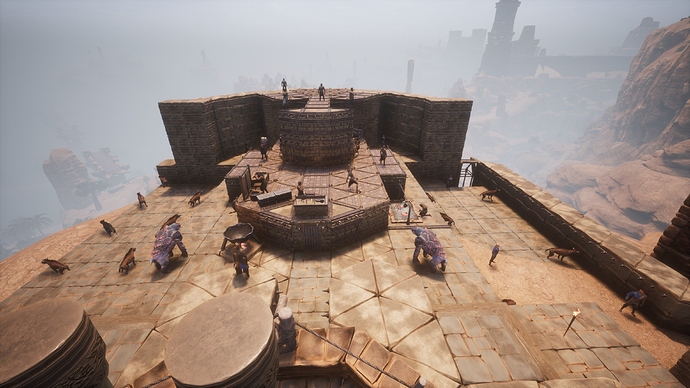 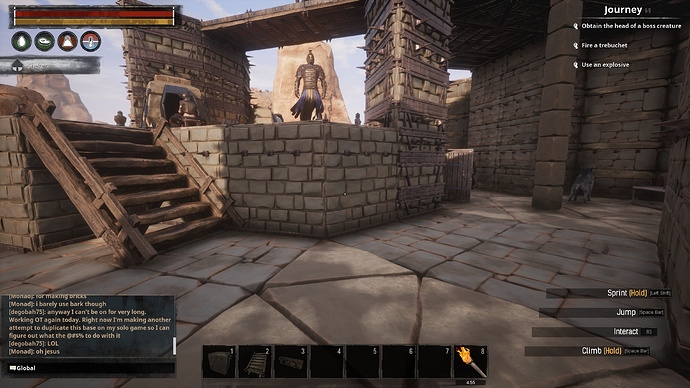 And here are a few extras because I just want to show my stuff off :)

You are looking at a tower design that has 2 Greater Wheel Of Pains stacked on different floors :) 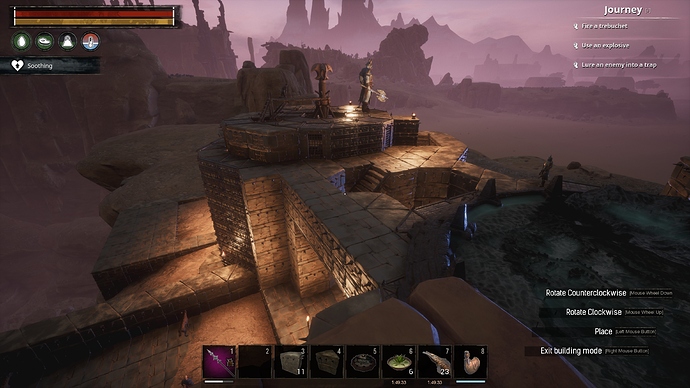 My maproom and you can probably just barely tell there is a Large Water Well below it and I intend on duplicating my GWoP tower on the other side of the maproom :) 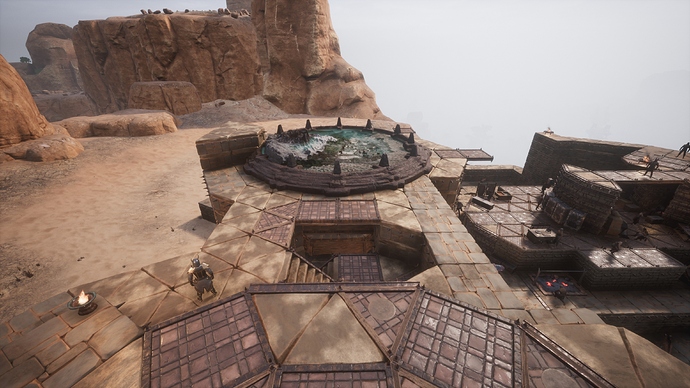 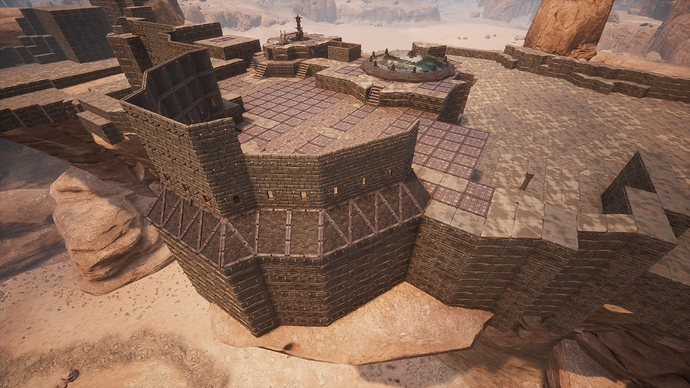 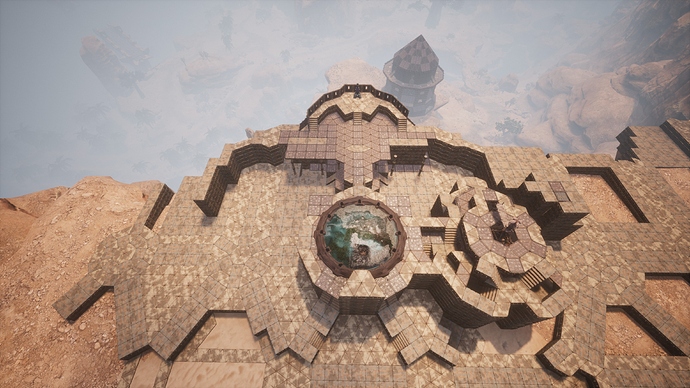 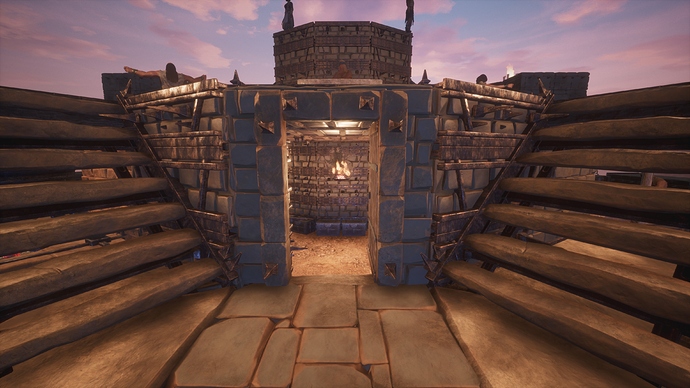 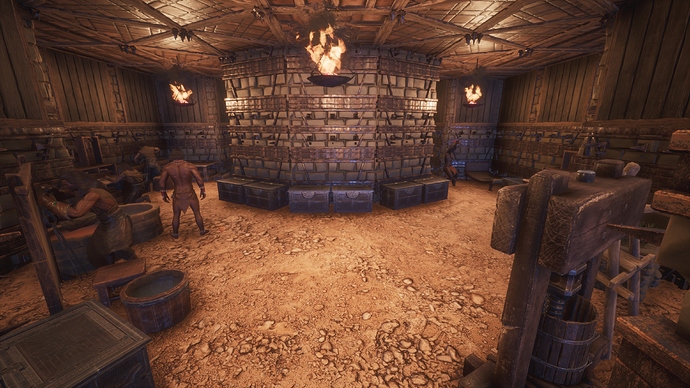 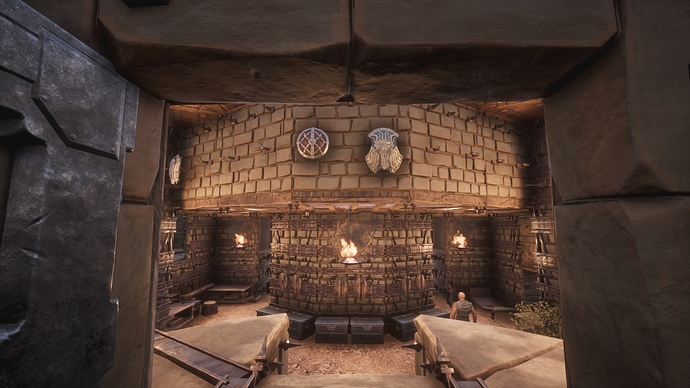 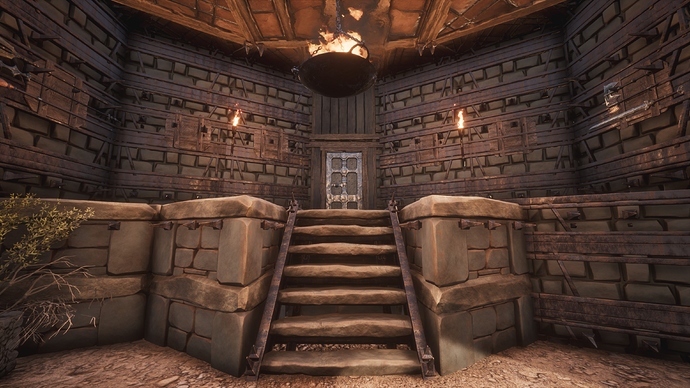 And some other design changes to work around the limitation. Obviously a work in progress…I’m out of building materials…Time to go FARM SOME MORE!!! 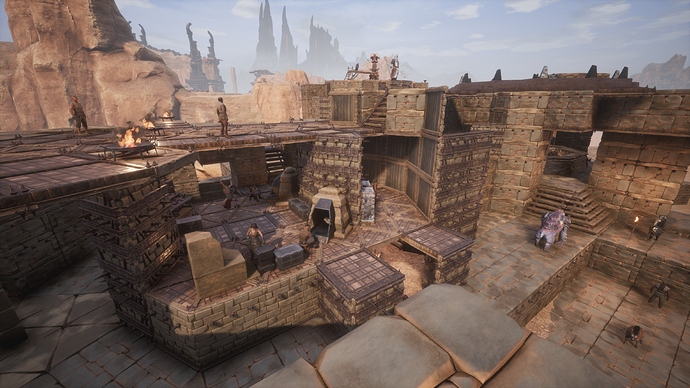 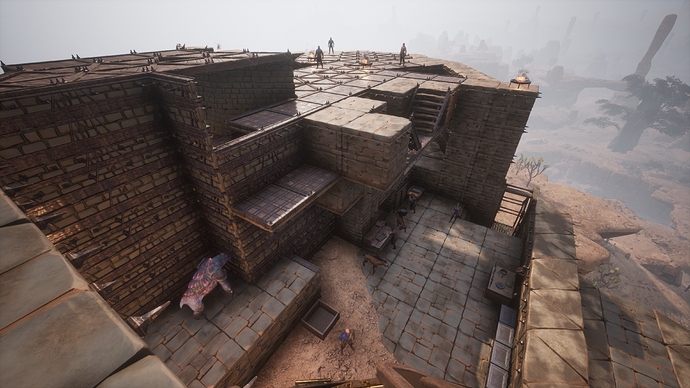 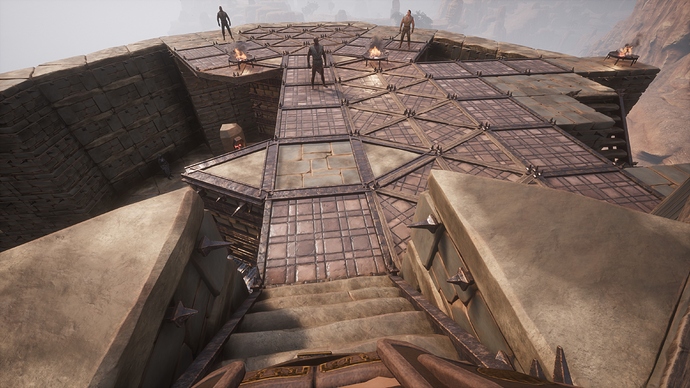 I’ve experienced the same issue of not being able to place fence foundations on all sides of a wedge foundation since the patch. It’s annoying, but the far bigger problem I’m having is that I can’t seem to make large windows by placing a doorframe on a foundation and then raising a fence foundation up 1/4 height like we used to. It seems like whatever change was made simply will not allow this anymore, which is a shame because it allowed for some really cool-looking designs.

It seems like whatever change was made simply will not allow this anymore, which is a shame because it allowed for some really cool-looking designs

In this case, the expression “this is why we can’t have nice things” sadly applies