It’s visible the amount of effort you have put into making this game but it’s also visible that no effort has been put into the ending.

Out of the thousands of ways to do the ending, the one you pick is probably the worse one as the player does not feel appreciated for all the effort to achieve it and the only possible reaction os to leave the game enraged.

There are several things you can do to improve this and I’ll suggest one of the easy ones.

You can keep the bad ending scene, you can even send us to the New Character Menu, but allow the new character to own the stuff from the previous one.
On top of that, for each time we end, raise the level cap 5 levels or at least, award the player with some feat points.

This way, with minima changes, players have a reason to end the game and raise the new character.

Think about this or any other option but do something because the way it is now, each time someone ends the game, it leaves the game and that serves non ones interest.

Keep up the good work.
Mogos

You should signalize this post as being SPOILER you know, just saying.

i’m sure there are too many balance issues with raising the level cap. however if your new character could start off with 10 extra feat points each time that would be cool.

Hello Malcom.
How do I do that? Thx. 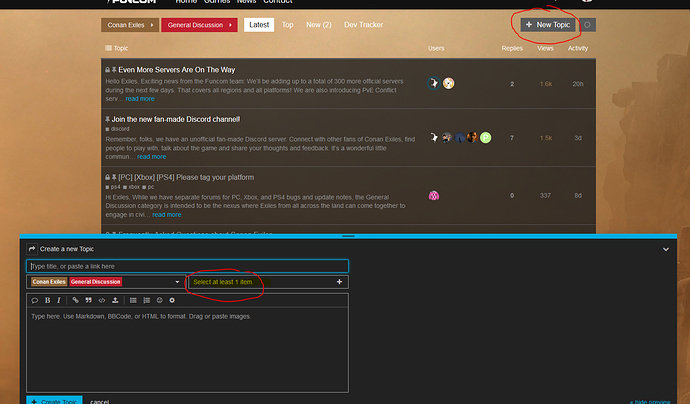 Klick on new Topic, in the window below right near the Topic Titel you can chose your Tag.
Since yesterday is 1 Tag needed before you can post.

This is a Spoiler Test

Ending is OK. No other reward is needed. Point of the game is to leave the “prison” or you can stay and live here… Also, this is not a single player game and i just wanna play and build. I dont even know if i will be able to make it to final cut scene

I would say the ending scene is fine: it’s what happens afterwards that’s an issue. Specifically, that a character you’ve invested a lot of time and effort into is deleted. That can really kill the sense of accomplishment you would otherwise have completing the game. I would say doing something to resolve that one piece would go a long way.

I agree with you 100%. I feel so betrayed by the ending, which i viewed on a youtube video- that i quit playing the game. There is no point in playing this game if, in the end, i am going to permanently lose the character i worked so hard to build.

I was very disappointed when I heard about the ending. I was hoping for this to be a long-term game with more areas and content added, but the fact that it even has an ending to me implies otherwise

i have an idea for the endgame. after we take off the bracelet the character will not be deleted, instead you will meet a new biome/map. A city from where the players were banished. you can travel there cause the barrier doesnt kill you and you can have your revenge.

i have an idea for the endgame. after we take off the bracelet the character will not be deleted, instead you will meet a new biome/map. A city from where the players were banished. you can travel there cause the barrier doesnt kill you and you can have your revenge.

That’s a good idea for a DLC. In the mean time, we should at least be able to roam the Exiled Lands without the bracelet on and instead of the cursed wall killing us, it should just be impassable, like a solid wall.
Hmm… But without the bracelet we can’t use the obelisks. I don’t really use them anyway.

I agree. The ending of the game is absolutely horrible and needs to be changed, either give some wonderful benefit for achieving it or remove it all together - the way it is now has caused me to lose my dedication to playing this game.

They could have made it possible for a player to take off the bracelet and then move across the boundary and build, and add a few more levels. Might make for a slightly more advanced game strategy. But not more feats or knowledge, just extra health, no more perks.

There are a limited number of places such locations could be placed anyway.

Note to self: Don’t finish the game…

At least that should be easy to implement.
Then we can perhaps build upon those options in the future, or add more possibilities.

On one hand I understand that the whole idea is to ‘get out’… But on the other hand, going through the effort, and basically being punished for it suсks. Some other benefit should have been added. I get that they wanted to make a choice with consequences… But this isn’t how you do that.

That’s all I’m gonna say on the matter.

Having a benefit for “finishing” the game will turn it into a must-do for any competitive server. Or likely just disabled. Why do you need a gold star? The game presents a challenge and rules to accomplish it. Finish, and you get a pat on the back and “Grats!”

I think the ending fits the Conan setting pretty perfectly. So often his adventures end with him walking away from a field of slain enemies and sandal-trod crowns. That’s what’s happening here. Built a kingdom you don’t want to give up? Don’t. Stay in the Exiled Lands. Done with the insane cycle of death, violence, and punching rocks? Take off the bracelet and leave.

The ending is throwing players out of the game lol, WHY ? What were they thinking ?

Why not just change the story, that in the end our exile loves the exile land, he has adapted, he gets stronger, he’s the king of thralls, now decided to keep wearing the bracelet, call the exile land home, and enjoy living the barbarian life in the exile land, all players happy and can still continue.

It’s better to live in exile land as a survivor, as a king, than living in paradise as a thrall lol.

I host y own server where leveling and harvesting are cut in half. I got to around 55 and decided I wanted to figure out the ending, worst mistake of my life. I didn’t see the option that I was going to be wiped, I guess I was pressing a to quickly. But the ending was just a quick ■■■ cut scene and it was done. WTF

But, you are in charge of that? If you want to be king of the thralls, then keep the bracelet on. Done. In order to even reach the end you have to kill every boss and most mini-bosses. Only the “king” even gets the choice.

CE was never about being a strong narrative based game. The story there is is told through journals, vague dialogue, and magic talking rocks that were recorded way before our dumb ■■■■■ got exiled here. The game is designed as a survival game where you build up, stab your friends and allies, and listen to their lamenting.

Side note, CE could make either a great, or awful movie.