How to NOT get the +acc perk on fighters

I always got the +acc perk on my fighters, until i tried this>

Just before getting a perk, dress them in full +acc armor so its atleast +11 acc.

And havent gotten the perk since then.

on 5 Cims and a couple of vulcano fighters.

Im on official just to point that out.

I lvled probably 10 before that and all but 2 got the +acc perk, even my dalinsia.

Now im working on another dalinsia. but all the other cim berserkers havent gotten it since i started doing this. 7 thralls.

Okay, so it’s approximately 10 thralls before, with 8 getting the perk, and it’s 7 thralls after, with 0 getting the perk. Good enough for me, I’ll try your strategy and see if it’s just a coincidence or not. Thanks for the numbers and the idea!

You welcome, I sure hope it is that tho. xD

Only got 1 thrall with the acc perk at lvl10. He had only +2 str gear on that time (old silent legion with godbreaker boots).

My current Spinas at Lvl10: 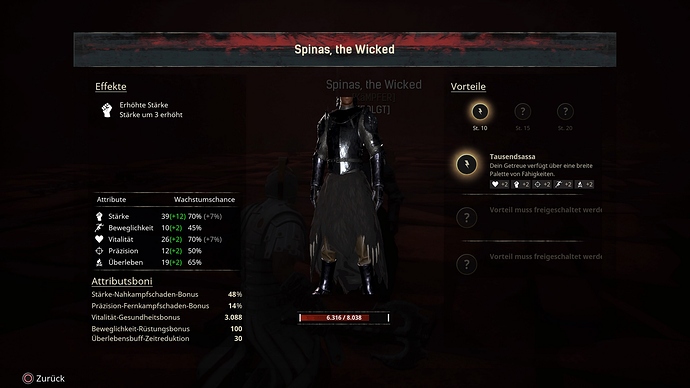 Always in full str gear which gives +10 Str (besides godbreaker boots) and at Lvl16: 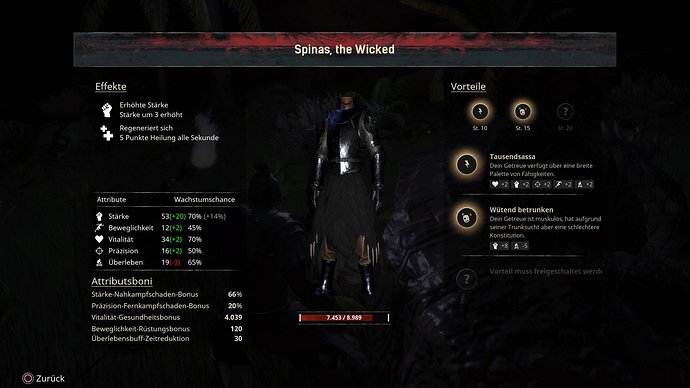 Also which thralls did you level as their starting attribute points depends on faction?

PS.: My thralls which I level up are using Ajas bane which gives another +5 str.

Then you lucked out, what server type are u on?

My cim bearer t3 is now getting insane amounts of HP buffs, more than the named ones.

And weapons Im using Blade of the adventurer and blade of crom, sometimes poison 2h weapons.

And the +str shield and 1h on dalinsia.

But so far this works, try it out urself.

Sounds good, doesn’t work. My fighters usually run around in full +ACC armor (because it looks awesome, despite the sheer idiocy of the stat bonus…seriously knight armor with archer stats? aaaaaarrrgghhhh I will never get over it).

Anyway, they still end up with Warden or other counterproductive perks a depressing amount of the time.

Bearers are bugged… IMHO T3 should be T4. T2 should be T3 and probably T4 is mixed up with T1 or at the same level.

You just had luck and were unlucky on others

Or I just had luck…

You go right ahead and test this on 2 million cimmerian berzerkers on an official server and we will wait patiently by for your results.

No need. You only need one case to disprove the theory and @Mikey already provided that one. Sadly, this particular “lifehack” just doesn’t work

Well I am pretty sure that the bonus’s your thralls get from armor and weapons are not even calculated when they roll for their perks. I believe firespark even went over it in a video. I just wanted to see if he would take up his own challenge of raising up 2 million thralls to give him what he considered “proof”. And no, you would never need a sample size that large.

I dont have to prove anything… I just wanted to show, that 18 cases is not a number where you can base anything on it.
Roll a dice 18 times. Every number should come 3 times, as the chances are 1:6. Probably will not happen with 18 rolls…
Roll it 2mill times and you will be quite close to that. Roll it close to infinite times and you will have 1:6 distribution.

And no, you would never need a sample size that large.

And 18 is way to low to base anything on it.

Well he is right about it, if your thrall has a certain amount of a stat he cant get some perks!..watch firesparks video on that topic.

Firespark is not the be-all, end-all authority on all things Conan Exiles. I can’t say whether he’s right about this particular thing, but don’t take everything you see on Youtube as literal truth.

Guys type what server ur on, im on pve C.

I heard just recently its easier an maybe even different on pvp, and should be,…

but dont compare it to admin mode, like i said so far it has worked.

I will tell or write here once it fails, I still have 30 more thralls to lvl before my limit hits.

I think this is what firespark tried to say in his video but didnt do it very clearly.

But it seems u get a perk the lvl 10 one if ur very low in those stats. Switching armor just before has helped me. Try it.

If what @jot29 says is true, something I thought I’d discovered on my own (excluding the die-roll of attributes by maxing them out) is available by peering into the kit. I’ll need to free up PC resources again, but a devkit is again in my immediate future.

Hi! Why is the PvP XP gain for followers 4x like at PvE? Is my LIFETIME worth less than PvP players? Who come even up with that idea and what for? Do (FUNCOM) honestly believe PvE players will level up dancers, when it needs quite some time? @Ignasi @Hugo Many PvE players are upset about this setting… I personally know 2 PvE players who stopped playing because of that, because their life is not 24/7 Conan Exiles (and neither is yours, yet you penalize PvE players). I dont care for what reas…

@Barnes I will check the video again, where he says that…

edit: here you can see the table which is from the Devkit. The Definitive Guide To Perks And Stats Conan Exiles Mounts Update 2019 - YouTube

Well he is right about it, if your thrall has a certain amount of a stat he cant get some perks!..watch firesparks video on that topic.

The information in the video is taken from the devkit, but that doesn’t mean the video is 100% correct, nor that @NORfem’s theory is correct.

The latter has already been disproven by @Mikey. Plus, if you look at the info from the devkit, there is no condition that prevents +acc perks based on current acc attribute value.

As for the video, let me explain. What you can see using the devkit is the data, but not the code. For non-programmers, let me put it this way: imagine Conan Exiles was a pencil-and-paper RPG. The data you can see using devkit is what’s written on character sheets and in books, but the code is your GM’s brain. If the code doesn’t interpret certain data the way you think – either because it’s buggy or because there’s hidden logic we don’t know about – then you can draw wrong conclusions from the data.

Case in point: thralls are not supposed to get the Hallowed perk if their max health is over 5000. That’s what the data says. However, there’s a bug in the code, which is why I got one Dalinsia who received the Hallowed perk at level 20. A whopping +15 to vitality, after 20 levels of beefing her up.

In short: no, he’s not right