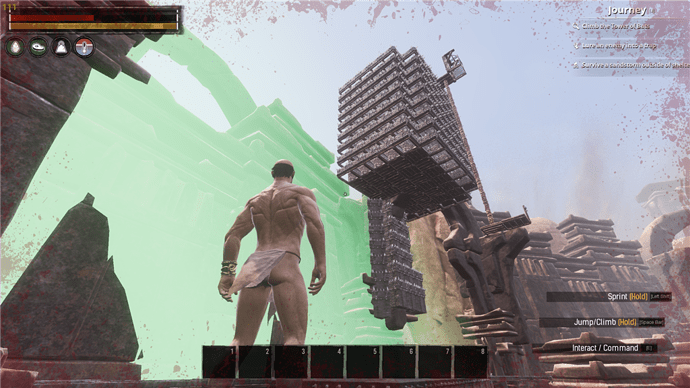 Is using the green wall like this to make your base unclimbable allowed or is it an exploit?

Only raiding options would be using gods or arrows. Would likely take 2 gods since you can’t summon one nearby. Would take a TON of arrows and time. You would have to quickly wipe almost the whole base to get any loot to fall out of it.

It’s allowed to be built that way. Green wall bases have been a thing for a long long time.

Just eyeballing it, there’s a few other ways to maybe approach it.

Also, assuming there isn’t land claim everywhere this is a easy base to trebuchet. Good luck exile!

That’s cool i have to try that.

Seems kind of risky and inconvenient to me. I mean, what if the bathroom ended up on the other side?

I mean, what if the bathroom ended up on the other side?

Then you wouldn’t even need to flush!

Use a trebuchet with Demon-Fire Barrage.

Try to destroy the pieces that give stability.

Getting a trebuchet down would be pretty tricky because of the location and the Dregs surrounding it. It might be feasible, but wouldn’t be a great position, adding to the already high expense of this approach.

Let’s not forget that this base is not climbable. You would have to catch them slipping with their lower elevator left down, and even then you could easily accidentally blow up the sandstone pillars and platforms connecting the elevator platform, eliminating the only climbable access you were lucky enough to have in the first place. I think the pillar and elevator platforms were left as tier 1 specifically for that reason.

My biggest gripe is that even with a good trebuchet plan, gods, or arrows, you would need to blow through a ton of the building just to compromise stability and get the base to START falling apart. You would have to blow the parts connecting the base to the pillar it’s built off of to get the whole thing to collapse, and you would have to do all of this quickly enough for the loot to not de-spawn in order for you to have any chance at gaining from such a raid.

It would make sense to me to assume that the green wall was not intended to be used this way. I don’t think there’s any other place on the entire map that you could build something similar to this.

Getting a trebuchet down would be pretty tricky because of the location and the Dregs surrounding it.

If you are patient or have a spotter you can treb from pretty far away, out of load distance in some cases. Hitting the junction from far would be tough for sure, but pummeling through layers would be pretty simple. As to cost, that’s relative - how bad you want in?

Let’s not forget that this base is not climbable

Maybe it’s just the picture but that upper elevator looks accessible from the big alien structure. Can you not just climb to it? I’d have to see the top to speculate on how viable of a target it could be.

It functions like any “turtle base” I think. To me a “turtle base” is any base that has a singularly impenetrable side and builds layers to protect the other vulnerable sides. A simple version would be a box on the ground. An intermediate version would be a box hanging on a vertical wall. This design takes that intermediate one and combines it with the advantage of a lollipop - difficult to bomb with jars.

It’s completely not climbable- the picture from that angle makes it look like the elevator platform is connected to the adjacent structure, but that structure is about 100m away. The only way to climb up to is is blocked by the green wall.

I see, that does complicate an elevator approach then. If the bottom is impossible to blow without destroying your way up AND you are against trebbing you could “base” jump into the lower elevator or upper elevator- or possibly the roof.

That’s when you build a stack of foundations or pillars/ceilings as high as you can without dying from fall damage and jump into one of those elevators. AGI and VIT are your friends here.

If it’s land claimed such that you can’t do that, you will unfortunately just have to treb or summon. Or catch them slipping and sneak it.

Edit: Also it just occurred to me that is actually someone’s base and here I am just offering up specific ways to destroy it - sorry dudes!!

What server?
I might log in and give it looksie. Since it’s by the dregs, won’t take long.

I’m afraid that if I say they will lock the thread since I’ve already made comments loosely calling this an exploit.

You don’t need to post it in the thread. Send him a direct message.

It doesn’t really seem like an exploit to me. I see how it could be viewed as a dirty play though

If this were an exploit what exactly would you tell the player who was using it so they could avoid doing it again?

It just seems like someone mixing 2 or three building tricks together, building against the green wall, building an elevated and hard to access base, and building leveraging existing structures and terrain. Since each of these are fine to do independently I don’t think combing them should be a infraction

I’m unsure why so many are surprised by this build. I’ve had and seen many green wall builds in PvP.

Well I wouldn’t call it surprising. In PvP you see all kinds of ridiculous and minecrafty builds.

Same, before pillar bases became the go to I feel like most of the hardcore bases were green wall based. Watching people kill themselves trying to dodge roll while fighting there has to be some of my best CE memories lmao.

In pvp using the landscape for advantage is something common. The greatest problem in a green wall frontier building is the purge. Most of the time spawns behind the green wall giving you a hard time defending your base. So maybe it gives you one side less to protect in a raid, but it gives you a blind spot of weakness in purge. If these players accept purge and raid at the same time, it’s game over for them

In pvp using the landscape for advantage is something common.

Using the landscape for an advantage isn’t uncommon in PvE either. The difference is that players and NPCs use different sets of rules and limitations in the mechanics. The bases people build reflect that.

Not really. Purge will just start and stop immediatelly as there’s no way for them to reach.