So watch this video: 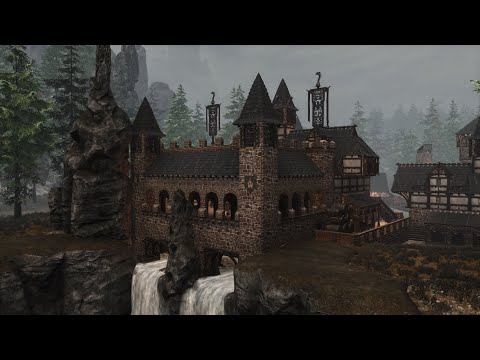 This is a (magnificent) build video. It looks amazing, I’d love to build it.

This would get you suspended for breach of TOS right? Too much land claim or something?

These builds are amazing but we can’t build them.

I will place my opinion here.
I see no violation and I believe that if someone would report a build like it his report would find no response. The footprint is logical, especially for a clan this footprint is literally nothing. It blocks nothing, it destroys only a couple wolf spawns and some rocks, so typically nothing and the build on it’s own do not cause performance issues at all.
Now…
If this whole build has “exaggerated” decoration 100 thralls numerous working benches, 50 fish traps hundreds of chests filled, 2.000 candles etc… That’s another story.
Again, the footprint in this build is very logical and above all you see not 1.000 palisades around it.

Last but not least, it is gorgeous, congratulations to the creator.

Ps. I hope the new building system will release us from these annoying building bugs for good.

It’s definitely not using too much land claim or too big of a build. However one of the problems you might face if you try to duplicate this is that he used a ton of decoration place-ables, which will likely cause client lag for others on an official PS server. The person who made that video was either playing Single Player or on his own private server. It really is a shame that console hardware can’t be easily upgraded.

Look this poor effort I did years ago only with vanilla pieces. This effort is still from my opinion on "the line"to get banned or not, why? Because it blocks paths and this is irresponsible against your fellow exile players on the server. Keep in mind that I speak for pve, on pvp it’s a totally different story. 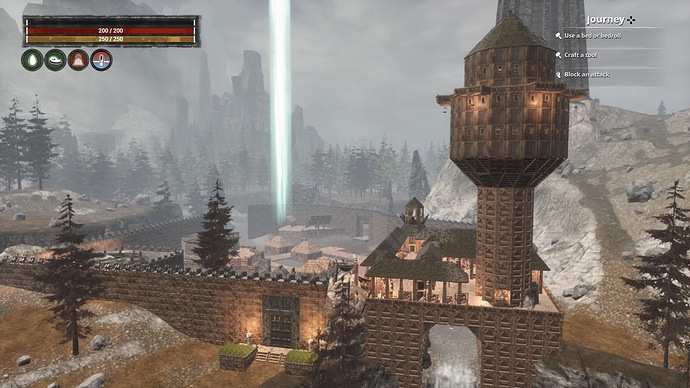 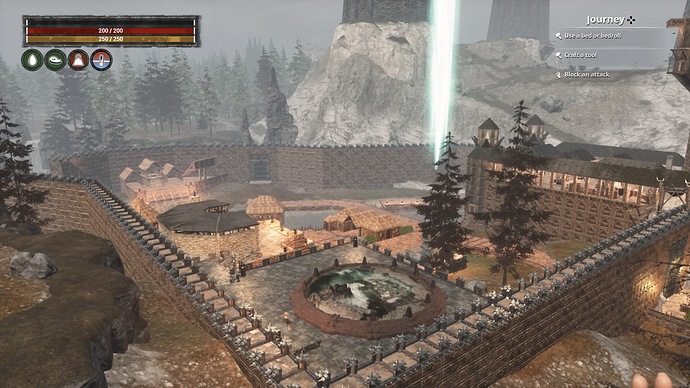 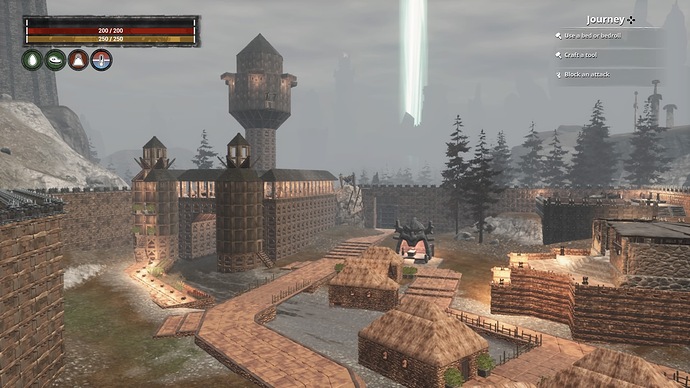 Yes, we are not all extraordinary builders like your friend, still I am really confident that this has a reason to annoy other players on the server, the one your friend builded has literally none, so please feel encouraged to build like him and this way of building is a really good reason we don’t need building limit, it will destroy creativity. I believe you can understand the difference now.

It depends. Size is only one factor. Land claim is a big factor but the question is not about land claim in general because every base has land claim. It’s whether there is 1) land claim that has no functional purpose and/or 2) blocks other players from enjoying the game (be it blocking content or just purposely blocking building) .

Looking at the footprint of this “village” I would say that the size isn’t over the top.

This would get you suspended for breach of TOS right? Too much land claim or something?

I don’t see any relevant in-game content blocked by this, such as dungeons, POIs, important spawns, lore tablets, ghosts, etc.

I haven’t watched all 36 minutes of it, but I did skip to the end to see the finished product, and it looks like every building has crafting stations to make it functional, so it’s not a purely decorative build.

I don’t see any roads or bridges going out from it.

I don’t see walls that are placed far from the buildings to artificially expand the claim.

It doesn’t look like it has enough complexity to bog down the server performance.

There’s no claim spam around it.

All in all, if you don’t build it in a place that encroaches on someone else’s claim, it looks like you should be okay.

EDIT: Also, don’t let the name of the video confuse you. Even if you consider this build to be a village, it still doesn’t seem to fall under the spirit of the “Walls & Villages” example:

Walls and Villages
This can be considered an extreme version of decorative land claim. The issue here is not the size of the base, but the function of the individual buildings. It is in the same spirit of a web of foundations, but players take the time to make the structures appear from the outside to be a functional part of their base. Player buildings that heavily focus on roleplaying can often fall under this category.

if i report this definectly it would get banned, i have seen smaller bases get deleted.

I do not see any issues with his base. Very nicely done.

I think its ok.

No I dont think your correct. I see nothing wrong here. If the player had columns or blocks scattered all around outside his base so players could not build around him then thats land claim abuse. I see lots of bases like that just waiting to be wiped soon as some enemy complains. This base is great it even leaves the maproom open. Only thing I dont like is the benches are scattered thru the base. I like everything in one big room. Right now I'm playing a Russian server and a player built in the lake at the mounds. All around his base is these large flower looking structures space apart just to stop building around his base. They take up the entire mounds lake and area. Now thats land claim abuse but it doesn’t bother me. Hope this helps answer you question. By the way does anybody hate it when a player builds his base right in the middle of the road.

I think that build is fine. And would be fine on 90% (there’s one server that it would have been too large for, unless you had a moderate sized clan) of servers I’ve played on.

By the way does anybody hate it when a player builds his base right in the middle of the road.

Depends. If there are other paths around it that don’t require climbing and don’t force you to make a gigantic detour, I’m perfectly fine with it. If not, then I’m going to grumble about it, but that’s all. It’s not really against the rules as far as I know.

I’m going to grumble about it, but that’s all. It’s not really against the rules as far as I know.

No but it’s annoying, people in pve and pvec servers must not block paths. New people join online servers to learn the game better and meet new people, actions like this only cause frustration to any other player except the one who builded this… anyway. Sometimes some builds are so obviously aggressive that could be considered as harassment too.

we got banned for building about the same land claim , they banned us due to land claim abuse, reason we had a maproom build about 12 or 13 foundations away from the main pyramid, a scorpion build, then we had an a 11x11 pyramid structure in the same area, holding a single animal pen inside and 1 stable, @wayzar never blocked anything, only 2 hyennas spots , and a few iron nodes at the sinkhole.

to respond to you, it all depends on the admin that might look at it if you get reported, their opinions on the rules are different, one might think its ok , the other one dont, so be careful.

This is just part of my base in my SP game. It does not block any boss spawns, POI, obelisk, or dungeons. All of these are near the base. Yes, because of its sheer size, would get a ban on an official server. 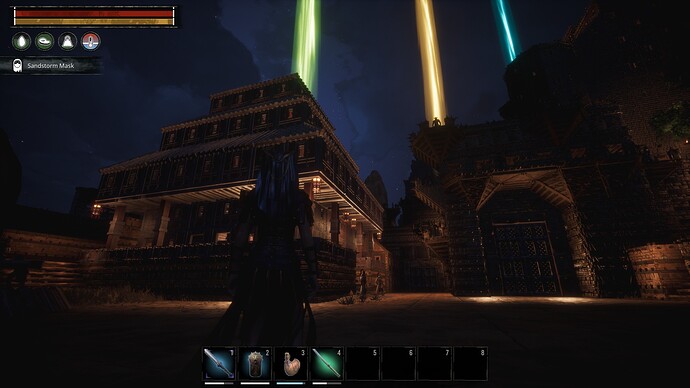 Thanks for the picture (cool looking base).

One picture is hard to tell the sheer size since I see it stretches to the left and right of the screen or what is behind it due to the alters are farther back. I am also curious how many building blocks were used.

I am also curious how many building blocks were used.

Me too, mainly because @Cattibria said “sheer size”. I’d love to know it this refers to the number of pieces or the surface area of the claim or something else.

I’d love to know it this refers to the number of pieces or the surface area of the claim or something else.

One picture is hard to tell the sheer size since I see it stretches to the left and right of the screen or what is behind it due to the alters are farther back. I am also curious how many building blocks were used.

It is a little of both. 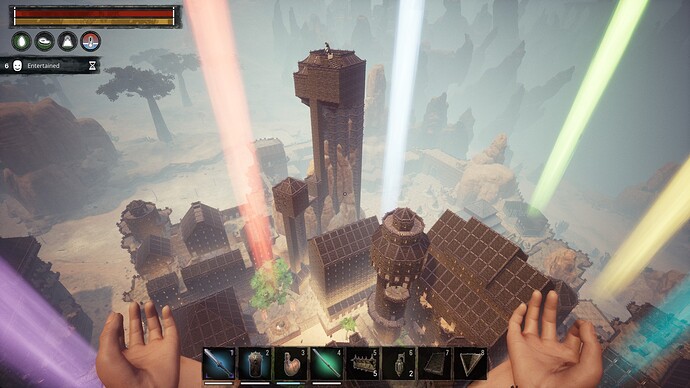 These will be of some help. I think the Pippi Heat Map is accurate based on her location in the SP game. The base covers an area that straddles two map squares.

Oh, okay. I can totally understand why you said what you said.

Much obliged for the info!

Wow, that is a lot of blocks. Oddly enough, it does not appear that it uses that much.

My city, my 3 clan mate bases, server locations (such as testing area, welcome center, portal tower, map room platform, etc) currently on Single Player (was a copy of the private server but the city bugged out on the server so it was lost months ago and I removed the testing area a while back on the server) is way bigger in size but only used roughly 31k blocks (my city itself in 2 parts stretched 2 map zones blocks) and I was in the sand dune sea which I needed to flatten in a sense (granted in many areas created basements to offset the lumpy or serious uneven ground.

I think my main part of the city (which is quite large) only used 13k blocks at one time (pre-Cathedral mod breaking). I do not see how you did 61k unless that is just a section of the base in that picture.

I may post pictures at a later date of all the properties for the fun of it.

Pippi heatmap I am unable to use since I put the testing area off the map which shifts all the clan properties locations on the heat map. It’s unfortunate.