Problem is, that even if someone can learn the feats on the scrolls, have you found fragments of power to use when making anything here?

Not all of the things you can learn require fragments. That is a good question though I have a box full of legendary items but I can’t make witchfire dust. Things are definitely missing.

Those fragments are in chests in vaults. or also some bosses drop them, so thats not problem, but that EA has gliches or bugs that are not added just now

I know you can get it from killing them. I’m saying I can’t craft it. I find it silly that things that seem that mundane can’t be done but I have a box full of legendary items. Also good to know that fragments are a thing.

We have a box of legendary stuff we can’t use because we can’t fix them if we do. Legendary repair kits are way to scarce on this map for the amount of legendaries available.

@Larathiel I know we found some recipes together, do you remember whether you could see them or not. This might actually be a bug rather than intended. I don’t recall us needed “library of esoteric artefacts” in Siptah.

@Narelle I didn’t remember, so what I did just now was look in-game and do an experiment…

Last night, I got the Decorative Grindstone recipe from a vault, yet I didn’t see it listed at the bottom of the Survival tab like normal. Since I could remember if I’d used it, I went into the admin panel and spawn a different scroll for myself (Battle Spatula). I used it immediately, but it still wasn’t visible at the bottom of Survival.

The thing is, in the Exiled Lands, the first time we visit the scroll wall in the Archives, we actually get a scroll that lets us learn “Library of Esoteric Artefacts” which places that category on the Survival tab. Sure enough, when I spawned and used that scroll, then the category appeared along with the two recipes I’d learned. 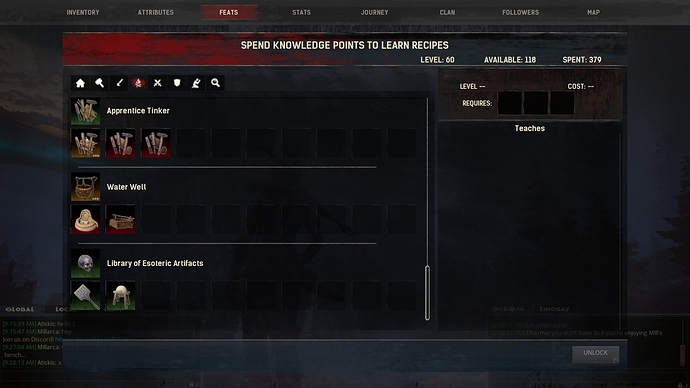 EDIT: Incidentally, the scroll needed for this category is: 30055
Scroll (Library of Esoteric Knowledge)

I’ve added it as a Pippi /kit on my modded server, and now other players can see their Artefact feats after using it. Devs should probably just make it so the first time we find such a recipe (or may an Acheronian Obelisk) that it unlocks the category.

Not showing after learned also happened to my scroll of Specialist Cooking III.
I got it from a Desert Dogs rift.

After using the scroll I can’t cook better. But who needs that with a stack of human flesh

You don’t need the scroll Library_of_Esoteric_Artifacts to build the recipe artifact. What we need is to be able to see these recipes in the Feats window.

If you can’t build an item it is most likely because you haven’t unlocked one or more requisite feats, e.g. The Battle Spatula requires the Hiltmaker feat. Once you have unlocked that the spatula will show up in the Improved Blacksmith bench recipes.

The Battle Spatula requires the Hiltmaker feat. Once you have unlocked that the spatula will show up in the Improved Blacksmith bench recipes.

Oh thanks, I was pretty sure that we didn’t have to learn the library scroll on beta, so I was surprised that we need to do it on live but that would explain.

Not sure about the cooking scrolls. I got IX or X on a scroll last night and have the little box with the bacon image in it on my feats tab. Other cooking ones may be bugged tho?

Library of Esoterics, I really thought when I picked up my first scroll and read it I could have sworn two feats were learned 1. Library of Esoteric Feat and 2. The weapon on the scroll. I figured it was just a bug with the first feat being learned, it kinda makes sense to have the first one you find teach you loe and its recipe. It would be kinda dumb to require loe be learned from rng drop items.

Edit: Doesnt LoE when you first learn it in exile lands give you a metal skull you can make? If I’m remembering that right maybe that’s part of the problem on siptah. If the first scroll is actually supposed to 1. Unlock the feat category 2. Teach the metal skull 3. Teach the recipe listed in the tool tip?

3 skull bosses are dropping them as well

I can confirm that as well. Fragments of Power are dropping from world bosses.