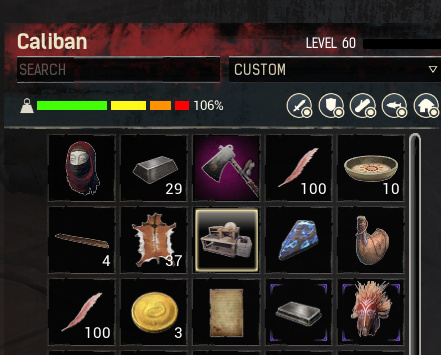 They asked to send this information via email.
testlive@funcom.com
The mail should contain the name of the toon, it’s level, that it matches the requirements AND the servername including the number. Only participants on official testlive are allowed into the raffle.

What Nuria said above -^

Side note, is that the new night vision mask? Is it any good?

Side note, is that the new night vision mask? Is it any good?

Very, almost like walking in daylight but with a ‘magical glow’ to it.
Nicely done by the devs

Ahh ok.
Well. I reached 38? in a small time last night when I originally wanted to go to sleep.
Now if one was to ignore south and go for north somewhere around northern villages, I guess one could level a lot faster yet again. … I think I will be moving there too.

Well. I reached 38? in a small time last night when I originally wanted to go to sleep.
Now if one was to ignore south and go for north somewhere around northern villages, I guess one could level a lot faster yet again. … I think I will be moving there too.

I got to lvl 60 in about 6 hrs I guess.
But that included testing things and submitting bug reports.
And also, having some fun

Heh, yeah playing on 5x when you’re used to 1x officials feels like cheating. I mean it’s great for short-term events like this, but man. One hit of a stone pick -> 50 stone

It took me about 30 hours to hit 60. I wanted to actually enjoy the ride and test a few things along the way. I’ve never understood racing to max level. So many lower level areas will just seem pointless once 60 is reached. But that is just my thing and not everyone needs to enjoy the game the same as I do.

We wanted to do as much testing as possible, so we got a lot of XP from the journey steps.
Also we needed to be LVL 40

but I still feel slighted as it is feeling a lot like Conan: Exiles care nothing for those that play off server. I asked in the fora if Funcom wanted Solo/Co-op to test, if they wanted that data and received no response. I assumed that meant we are not that important.

I am truly sorry if that feels that way, that is in no way intended. We definitely do not want to have one group feel that we appreciate them less than another. We know that our community has players with totally different background and focus and we definitely try to make sure we do something for everyone.

Conan has a need for game play “loops” that can keep a players interest. I agree.

A new, and good example of this is the Fragments of Power. Which will encourage players to (after lvl 60) go into the undead city and grind up some extra feat points. This will effectively be a QoL grind/loop at the same time. Trade and selling of these items will be nice as well. It’s a nice solution, but it’s only one loop, and we need several. And they need to be on demand, as in, player can seek it out on his schedule and achieve his goals at all hours.

(Purge) is an example of a not on demand feature. (acquiring thralls from a purge is cancer.)

There needs to be additional ways to upgrade and customize thralls (cosmetics…such as peg leg/eye patch which are great), and crafting stations. Armor, building pieces, weapons could all use additional stats (of some sort) that can be added to them… via crafting, or via rare drops.

An addition to the war paint system could be very useful as well. Scribbling on scrolls or runes to make trinkets or wards that benefit the user somehow. Add more “armor” slots to equip some of these items. Simple bonus to HP, or Stamina pool would be fantastic.

Additional feats, of a great variety should be added.

Basically, make more time sinks so players don’t consider this a one and done game. Transition it into a more long term game, so players can invest thousands of hours rather than hundreds.

Having said all of that. Funcom has already mentioned they are working on several of those things. We just have to wait. And the wait sucks, but the patches being shown to us are promising.

As whiney as I can get, I do enjoy the game and am optimistic, hopeful, excited for its future. I do get frustrated with the wait though, don’t we all.

This looks like a real nice idea, and i feel it worked greatly for you.

Again, we have all different playstyles, and our perception of fun is different. But we all want a game that we can spend lot time in it, and replay it as often we wish.
I know it doesn’t work for me we the houses left. I simply enjoy building to much, and would fill my game with bases.

Also i think we need more occupations for lower level characters, not only at lvl max. Depending playstyle the way to the end-level may be long, and this is fine. For me the way is the game. End level becomes quickly bit boring, or maybe i love the precarity feeling, who know’s ?

Sure, when i play singleplayer i know the ways to level quick, and reach the needed levels, but that’s mostly not my goal. I love earn a new weapon/armor/stuff and have the time to enjoy it fully before i pass to other things. Finding a good spot for a base, building it up, is an other pleasure. But i feels still bit same, so different task, possibilities and smaller challenge the long the road would be great.

I understand well, and i believe it’s a good way to play it. But i love the wild, and having nothing.
Also this need you hold still a DB.

I test also simply to much often, so it’s easier and better to start over, with a new DB.
But it can bring great ressources using your technic, i agree.

There is a lot of stuff i would like and could imagine a great add, like including more natural part in buildings, but i understand also that’s a difficult task to balance it for multiplayer.
Of course, some great mods give me lot of these abilities, but unfortunately not all. And some featue are simply good if included in the base game, like options, options are still a fine thing, especially for singleplayers and privat servers. Like opening chest at lvl 60 or before could be a simple checkbox.