I know I’ve talked about this before but I just want to say to the devs , if they made this game free they’d have a really good population, 70% current players on PS4 are still playing from the time it became free for a month almost a year and a half ago. now imagine if they made this game free from then until now? The servers would all be populated and they’d make a killing from selling dlc , to the point where maybe they’d have more money for better resources for all the bugs and exploits this game has. They really need to consider this cause now vigor is a survival game dayz has put out and half of my clan mates (20 people) have now gone to vigor simply because it’s free. No one wants to buy a game to try out and it’s not for them. I only stayed playing this game cause I got it free and if it was never free to try I 100000% would have never bought it
@Hugo @Ignasi

Look at the history of FunCom games that went free to play.
Age of Conan was censored and and population went down not up.
Same with Secret World, Censored PVP removed and population dropped.

If you are a grown up person, spending a bit up front for the hours of entertainment is not a hardship.
And it is free after that small investment.

And that’s why this game is dead lmao who’s really buying a 2 year old game with exploits and bugs that they don’t care to fix? And when they do fix something it’s the most useless fix ever cause it ruins the game more, dead servers , exact same people play as when I started, which was 2 years ago? Like i want to see new challenges, new players , new 10 man clans . Those games stated are complete garbage games to begin with compared to conan lmao , I’m a heavy gamer and never even heard of those game titles , neither has my friends, lmao my friends didn’t even know conan until I played it. So either they need a better marketing team or they need to make it free which will do the marketing itself

Let’s look at games like ark where they go on sale almost every month, they have up to 100k players monthly , then there’s conan with 12k players monthly and they dropped one of the worst maps ever and lost 80% of the population that came with the map update , they still don’t listen to players about thralls and horses doing all the work in pvp and what do they do? Make heals even worse making it even harder to survive 10 people on horses and thralls lmao , then they make crafting benches x5 biggger making almost half of the base locations useless . that’s their solutions to the problems that haven’t even been looked at ?

Who’s going to pay a base value of 50 dollars for a game like that? No one clearly cause all the servers are completely dead

Free?
As in giving it away?
OP, you’ve lost your mind. Ya cheapskate.

Age of Conan was censored and and population went down not up.

The game did not get censored, in fact, it got uncensored in some countries like Germany for example (no limbs being cut off during fatalities was suddenly gone if you downloaded the game from the official website).
The population went up quiet a bit when it first went F2P but it pretty much went back to where it was (and kept declining like it was before the F2P launch) because the restrictions were too high for F2P players.

Who’s going to pay a base value of 50 dollars for a game like that? No one clearly cause all the servers are completely dead

I have no problem with sales, put it on sale every week for all I care.
Going Free to play is more involved than you realize, the game would be gutted.
I played Age of Conan and Secret World and watched them go down the drain.
I don’t want it to happen to Exiles.

One of the “exploits” they just did something about was body vault from the family share on steam.
If it was “free” which f2p never really is free. Body vaulting would be back 10 fold.

Besides censorship another method of monetizing would be implemented.
Instead of $20 for a DLC it becomes $5 for a new Armour, that is really just a reskin.
Want to dye your gear? $5

I’ve seen it all before.

And the thing that drove people away was not the price of the game or the “bugs”
It was toxic players who use exploits and grief people until they quit. F2P would invite MORE of those people.

Asking for F2P is saying instead of fixing the game, lets censor it add microtransactions and invite all the toxic trolls to come and drive away the few players who bought the game because it wasn’t censored or full of microtransactions.

I can’t believe anyone over 21 would want this game to be destroyed like F2P has been proven to do.
In my mind I see a 12 year old who thinks F2P will let them play a game with naughty bits without mummy finding out. I apologize for that, I’m sure you are an adult, it’s just the picture this paints in my head.

As I said it is free already, just pay once, and you never need to pay anything again.

The game did not get censored

It did in the U.S.
I was playing when it went F2P here.
My wife is from Michigan’s “thumb”

Please, no “free” to play model. That rarely helps a game, if ever.

In Age of Conan, they introduced a cash shop that still gives me nightmares to this day. It was pay to win, predatory and badly implemented. You could straight out buy endgame armor for about 80 €/$. Some people paid that much, thinking they’d now be powerful in PvP or whatever. Problem: the armor they sold sucked. Much, much better gear was available by then, and even pretty easy to get for many classes. It wasn’t even pay to win, it was a predatory near-scam. And as raid leaders, we had to deal with inexperienced, but loaded players that were really disappointed about how weak their gear actually was and even got ridiculed for wasting that amount of money. In our guild’s all-access raids, I offered to craft for free better armor for anyone that asked, just to stop people from loosing their money and self-esteem to that horrendous cash shop.

Same happened with DLC. They had to dish out something regularly, even if they didn’t have the time and resources to develop something of quality, just to make some money, as the steady revenue of sales / subscriptions went away.

Funcom had a really bad trip back then. Personally, I don’t even blame the poor developers that had to implement that crap. They got all the flak for that, but they only had to follow up on the decision to make the game “free” to play.

You can read the story of the Vanaheim DLC here, for example: 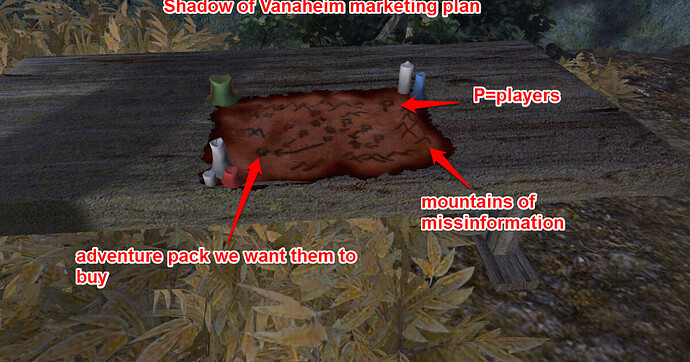 Sitting down to write this post I feel overwhelmed. Sadly not by positive experience I have had with the new adventure pack (can you lega...

In summary: No, please no.

In fact, if Funcom offered a subscription model to increase development speed and quality… sigh Hell, I’d pay for it. Imagine how cool the game would be if all the half-done stuff would be completed. The map has so many points where one can see that the map maker had some idea about a cool lore item or quest, but never got to implement it. So much stuff that could be fixed or improved - but it’s money that makes the world go 'round, not wishes or forum outrage.

So, if anything, we should campaign for more overpriced DLC, a sub model, doubling the sales price, adding a donation button or pre-buying DLC, … giving them money, not them giving away stuff.

It’s sad, but reality is sad in that aspect. 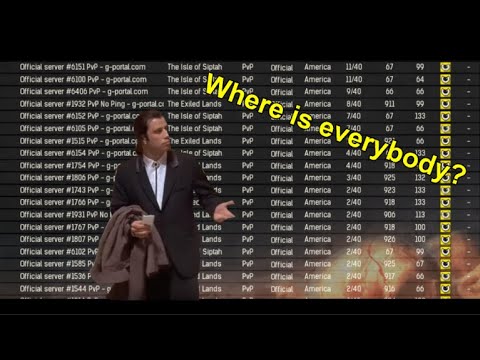 This game has an usual play cycle for many players that has many peaks and valleys. If you look at the steam numbers for the game, it goes and down every few months.

In some cases, you can argue there might be too many official servers then actual need currently or when it normally peaks, which will drive the overall populations numbers down on each server. (I am only accounting for EU and NA regions) Without really knowing or understanding the numbers, its hard to give real data on that but as noted above, many servers do feel dead at times. Although removing the servers can cause undue hardship for those who still play there so its not like there is an easy option to just remove serious low used servers like they do in MMOs and transfer the players over. You are unable to transfer their bases and such over as well.

I play on both Official Servers (2 of them) and manage 2 Dedicated Modded Servers so I see how the population flows on all 4.

I agree with the comments that Funcom needs a revenue source to keep the game going (continue updates, fixes, improvements) so the current business model may be the best way to achieve that while still having expenses directed to the game itself. Free to Play model, will require they add a new way to obtain money which is probably a store like MMOs have to sell cosmetics, potions, mounts, etc.
This game is pretty much a one-time cost for most players (buy the game) and never have to spend another penny again. Some of us of course buy most if not all the DLCs like its candy, but its overall cheaper than paying an subscription for MMOs each year. ~$150 a year subscription for MMOs (which oddly has not changed much since 1996.) Yes, those like myself pay a heavier cost when renting or owning game server(s), but I feel the money is well worth it for this game. I, along the players who play on my servers makes it worth while.

One additional note, the game does go on sale every so often, which I believe the game increases in population (unconfirmed) during those sales.

@everyone I don’t understand how you guys can even compare exiles to the other games they’re completely different in so many ways and it is way better than the other funcom games cause I’ve never even heard of them … conan exiles brought the company back to life lmao . It’s like ark and dayz making it feee will only let people try it out and maybe buy dlc if they do it’s simple what does being naked have to do with anything in this game lmao

If by free you mean untethering the game from Funcom Live Services and a persistent online connection, then yes, free Conan Exiles!

Maybe not completely F2P for ever but just another time in ps plus, I got multiple freinds to buy this game after I tried it out for free, wouldn’t of even knew what it was if it wasn’t for being free