Hi
Do you have any plans to extend map in these locations? 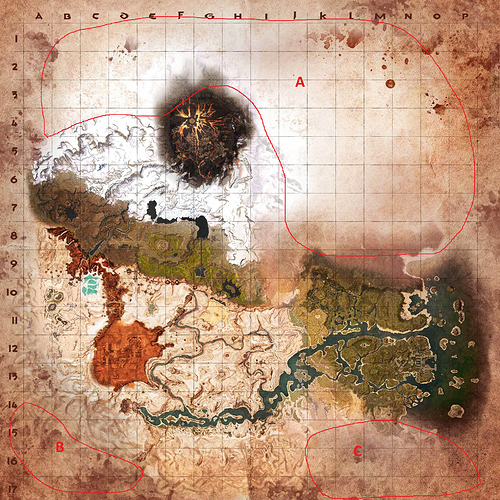 I think something will be going in the area to the right of the volcano. I noticed a “light” originating “North” of the area of small islands east of the jungle beyond the ghost wall.

It would be cool if they filled in the entire empty area.

No. Funcom has repeatedly said that as far as they are concerned, the map is done.

As for the area to the right of the volcano, that’s where the dungeons are located. This was revealed in the last stream.

The Dregs dungeon is down in the area you identified as “B”.

Dregs dungeon actually is undergound and its end is close to the Unnamed City Wall.

So why this map is so big? First row is not needed then. I think that map will be bigger. Dungeons are under visible terrains on the map

No plan for map extension, or new religion after jhebbal sag. they will make new dlcs, features, dungeon.

Ask Funcom, I’m quoting what they have verbally said(several times) I’m not making this stuff up off of speculation.

The exit is, yes, but the instance you load into is actually in the south west, in the B area as Servian mentioned. If you want to see it, go to single player, ghost yourself and have a look.