Maproom keeps decaying despite being on base with full decay timer?

I’m playing on official pve server and while my base has full 168 hours decay timer, my maproom keep decaying, it is placed on foundations attached to main base!
Every time I place a maproom on my foundations it starts with 1½ hour to decay, everything else gets the decay timer from the foundations, it’s just maprooms that act so weird.
After placing the map room it does infact slowly raise the decay timer, but not enough to last until next day, so far I have lost 2 maprooms, for now I pick it up and put it in a chest before logging off, but this really shouldn’t be necessary.
Any suggestions will be welcome, I am so tired of this 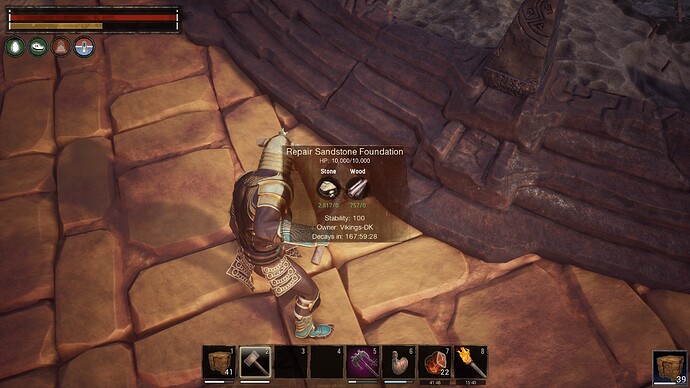 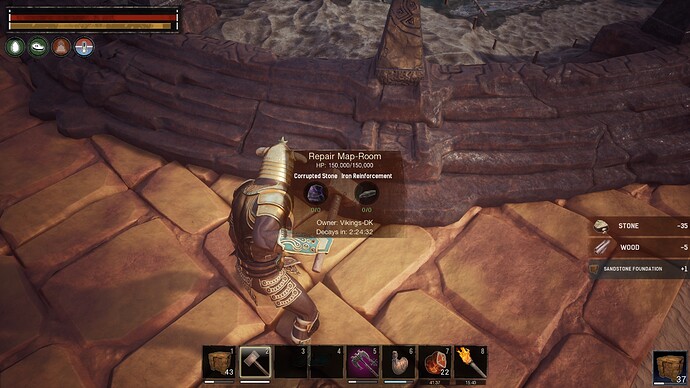 You are showing the decay rates of the map itself Frillen. What is the decay rate of the foundations? Since they are sandstone and I can not see beyond what you have shown us, put a hammer on one of those. My recommendation is to upgrade a few of the sandstone foundations to tier 3. When you do, you should see the timer jump up significantly. If you love the sandstone look for the area you live in, just upgrade some underneath the map where they will be hidden away. See if that helps any at all. I’d love to hear the outcome.

Or using sandston use more layers on top each other that helps too. Also some places are not good to place anything then foundations (some places in Vulcano for example)

It’s not like I love sandstone, I’ve been away from this server and had to start almost from scratch, building and crafting, my character is level 60 though, the base is only temporary until I get up to speed building a proper base in T3.
I have often placed a maproom directly on ground if it was flat enough, and just being close to a base always gave it the same decay timer as base, anyway thanks for all the suggestions guys, really appreciate it, the problem seems to have solved itself, I logged off shortly before server restart leaving the maproom in place and checked as fast as I could after server restart, and then the maproom started to share the decay timer with the foundations it is placed on

Ok I totally missed that on the timers, my bad. I saw your weapons and such and knew you were high level so just expected it was a new build and you could gain the t3 easier. Glad this problem has resolved itself! Thank you for sharing the end result.