I know that Mitra is not a god of luxuries. I know that his alters are simple places to worship at and not fancy things covered in jewels and gold. However it also is not a religion of squalor. The outfit that can be made in the Mitra alter is just the course shirt and pants dyed light blue. I can make that without wasting any lingering essence. It needs some love. Make it like a robe or something?? No need for it to look like it is made of the worst possible material.

ot a god of luxuries. I know that his alters are simple places to worship at and not fancy things covered in jewels and gold. However it also is not a religion of squalor. T

aye in that fact all religions should have better outfits and weapons imo maybe an unique effect or so and stats that are good for endgame.

like every religion has a full outfit / weapon in the end.

Well, in the spirit of the latest DLC, they could reintroduce the AoC Mitraen pvp armour. No poverty about that one

*Edit
Likely we will see a return of a lot more AoC armours, depending how easily they translate to CE

On my modded Solo game I dress my (male) Mitraen priests in a dancer top and Kambujan Shaman robe bottoms, dyed white and pale blue. The combination looks like Greek or Roman toga-style robes.

The actual Mitra clothes currently in the game look really boring and have no stats to justify their existence.

Now the question is… Will the Devs see this post? Or will it get burred under all of the other posts of people complaining about nerfs and changes.

I know that his alters are simple places to worship at and not fancy things covered in jewels and gold.

Huuuhhh… Temple of Mitra looks pretty golden and opulent to me, possibly more than any other T3 god altar… just saying!!
Definitely could do with some priest clothing revamp, though. Like @Kapoteeni said, Greek/Roman seems to be the obviously choice as it’s what Mitra’s statue and god resemble the most (although for some unexplained reason his weapon of choice is an Egyptian Ankh that was clearly stolen from Derketo’s Egyptian inspired cult… but I digress). A lot of Greek/Roman outfits are pretty simple and suitable for a cult of a god who is all about benevolence and virtue. Or you could go back to the original god inspiration and give the priests persian outfits!!

Any of them will do for me.

That actual Conan lore says Mitra alters are simple. The game made it look fancier then I think any Cannon alter has ever been. Not complaining it is a very nice looking alter.

This is the most detailed description of a shrine of Mitra in Howard’s books that I could find: 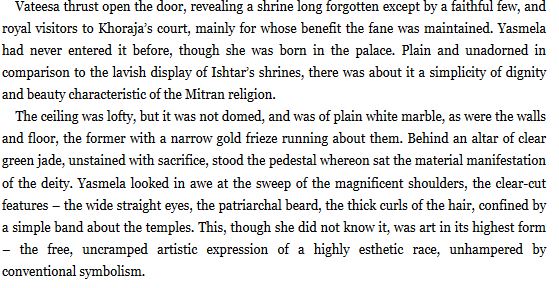 So even though there’s some bling around, and the materials aren’t cheap (white marble and clear green jade), it’s pretty simple.

This was my initial thougths too Strider5599. Im not trying to be derogatory here, but the current Mitra robes are essentially just Coarse Clothing dyed Light Blue. I agree with your idea, that we should have a variant of the Asura Armour, except dyed the same Blue colour as the current set. Much nicer to look at, without appearing too extravagent.

I completely agree most of the deities need a rework,

Tier 1 items need to be revolve around crafting and survival

Tier 2 need to revolve around building and community.

Tier 3 need to revolve around PVP and ratings.

But as always we’ve been complaining about this for over a year, and the Developers did not participate in the forms and have no understanding of foresight of what the game is. It’s just a paycheck

Quite interesting. Certainly not cheap though, besides the white marble and clear green jade, note also the reference to a narrow gold frieze. But this might have been the interpretation of the shrine from a rich’s person point of view, it does say it’s in a palace, so obviously, good materials were used to keep up the same architectural language that the palace would possess.
I think the “simple” part of it has more to do with classic design aesthetics though, as in, he’s not dressed in an opulent way, nor shows signs of riches in clothing nor jewellery. On that note, the game statue is pretty spot on.
Were the tier T3 made out of marble slabs with small gold finishes and a jade statue, would fit this description perfectly. Still, nor too far of, all things considered.
Any mention in the books about what his acolytes would wear?

I completely agree most of the deities need a rework,

That is not what this post is about. The religions are fine as is (Except Darketo). I just want the Mitra clothing to be something better.

This was my initial thougths too Strider5599. Im not trying to be derogatory here, but the current Mitra robes are essentially just Coarse Clothing dyed Light Blue. I agree with your idea, that we should have a variant of the Asura Armour, except dyed the same Blue colour as the current set. Much nicer to look at, without appearing too extravagent.

Any mention in the books about what his acolytes would wear?

This is a good question.

Any mention in the books about what his acolytes would wear?

There is a curious absence of priests of Mitra in the original source material. In Hour of the Dragon we see the former priest turned necromancer, Orastes, wearing “ermine-trimmed robes”, but it’s somewhat unlikely that he would’ve kept wearing his priestly outfit after getting booted out of the order. In his essay The Hyborian Age Howard introduces Arus, the priest of Mitra who sets out to convert Picts. He wears “the silken robes of a Nemedian priest”, implying that nationality, in addition to religion, may have affected the way priests would dress. It’s also worth noting that Arus lived 500 years after Conan’s era, so fashions may have changed during that time.

One of the curious features of Howard’s writing is that occasionally he describes a character’s clothing in great detail, whereas sometimes even major characters get little or no description as far as their outfit is concerned.

@Kapoteeni Aaww shame… it does keep opportunities open though, even if ermine-trimmed robes and even silk sounds a bit expensive. Maybe a simple aquilonian or persian style robe would do.

@Croms_Faithful and @Strider5599 while I understand your point, I would much rather a new outfit ingame just for Mitra’s religion other than a recolour of another outfit, which would basically create the same issue that we have right now, just with a different clothe. Besides, in the (prolly unlikely) event that they add the Asura religion ingame, you wouldn’t like it to have the same outfit as Mitra would you? (even if we do have chosen of Asura’s as Mitra’s Priests ingame at the moment…

All the deities need complete rework along with what is acquired from the different tier development. This is always been unfinished and lackluster. There have been some good mods out there that showcase what is the potential of this system

It isn’t unfinished. It is where they wanted it to be. Just because it’s not what other people think it should be doesn’t meant it’s not done. If other people want to use mods to change it then they are free to do so.

Just because you put a stick-in-the-mud doesn’t mean you can call it a house, it’s very lackluster. And kind of featureless in scope. And when the community has talked about it and length for over a year and the Developers simply are not willing to listen are revamp current systems. The player base leaves in the population dwindles. That’s why we’re currently running 2500 population. Compared to other major titles that have 65,000

Spend some time read to the forms thanks on a larger scope the community is not happy. And none of these problems are getting resolved, some of this stuff has been complained about for over a year but if you notice the threads lock after 7 Days of inactivity. And disappear

badly slept or just tired of the game? each of your comments in the last few hours is dripping with frustration and latent aggression against the game and/or devs. if the game bothers you so much then i recommend a break. some distance. take a deep breath and stop by again sometime.