These are my only ‘bonuses’ and adjustments he’s said he has made to the server. All crafting speeds are default.

EDIT: This is my first build in Conan. I started playing 2 months ago. 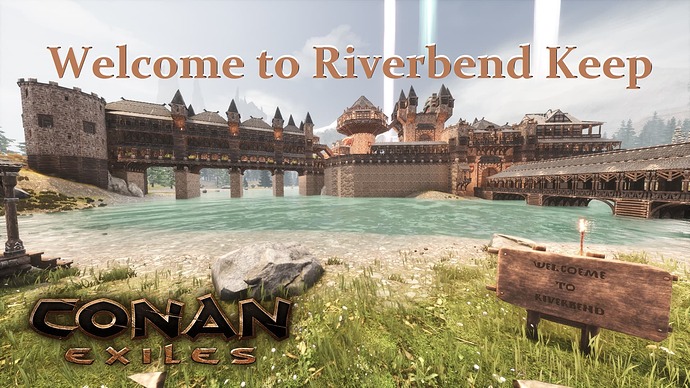 Thank you, my brother showed me this island and challenged me to make a moat out of it.

That is very nice. Will check out video when I have better reception.

This server just caught a bug where the pieces spontaneously lose stability and the whole castle despawned.

I will no longer be playing this game or suggesting my friends buy it. This is an insane mistake, and the creators are silent @P… we are also powerless in our subject … since December

Holy crap… I’m so sorry that happened to you, man. My sincerest condolences to you. Take care, Exile

Hi [CREATIVE NAME], welcome to the community. I look forward to seeing many more valuable posts from you. Your insight will save the game singlehandedly

Technically, yes. There are, or were, patches you could build on, but this one looks to have gone overboard. It seems this wasn’t a bug, just a clean up. My guess is the patch kicked in with the additional no build areas, and…poof.

this stuff happens daily and people will still defend this game l0l.

This isn’t any different than when someone builds on a boss spawn point and is removed. If you are on or near a named map location, move, or take your chances.

The clue here is that the part of the structure not on the island and not connected, just seen in the extreme right side of the picture, is still standing. That indicates it was not a bug. The temple, wheel, and decorations lend further proof to the idea that the build was removed by Admin. I’ve seen several builds taken out this way. This is usually what is left.

Still, it was a nice build.

This server just caught a bug where the pieces spontaneously lose stability and the whole castle despawned.

I will no longer be playing this game or suggesting my friends buy it.

It was, most likely, the POI protection system released with 2.7. When a POI is blocked, anything blocking it is removed.

EDIT:
And that username is now a banned word

And that username is now a banned word

How much do you have to piss off the mods to have your username blocked by the profanity filters? Holy crap

Well, the word itself is banned so that a username could be made with it was an oversight.

Ah ok. That makes sense. Here I was thinking that this dude had made such a donkey of himself that the mods made even mentioning him impossible lol

How much do you have to piss off the mods to have your username blocked by the profanity filters? Holy crap

Other way around. He managed to pick a banned word for his name