With Orochi Labs now open, it seems high time to fill the esoteric ether with the ramblings of deranged raiders - now let’s go play with tentacles! This guide will cover the mechanics of the fight from Story to Elite 5. 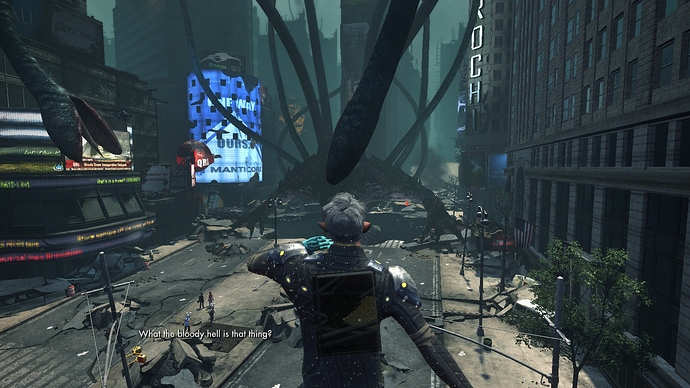 Stage 1
Beginning at the entrance of the train station, players will pass through several amusing dialogues as they wind their way through the wrecked trains and out into the sun - leaving the trains puts players into swarms of filthy civilians and a few dogs before you make the roof of the parking garage, where a pair of Zero-point birds will swoop down. Make your way through the QBL broadcast (cameramen are nuts) and jump down to confront the Unutterable Lurker.
You only have to do this in Story Mode, as later difficulties place parties directly before the Lurker.

First things first: on any mode you’re on, the Lurker will throw puddles of filth at a player who is past the metal grate directly in front of him. If a player is further than the grate, they will wind up placing filth - mistakes are not such a big deal in Story Mode, as they will vanish after a time. Still, it’s not good to place near people.
In E1, filth drops off much slower, and presents a much greater danger. By E5, consider your filth mistakes permanent, and your team requires a Filth Placer at all times to ensure you don’t get filthy puddles in bad places.
The Lurker will throw filth as its opening move, after Shadow out of Time and shortly after slamming down his fist every second time.

Fighting the Lurker close comes with its own set of hazards - players must dodge from side to side to avoid his colossal falling fists or risk… boo boos, if you’re in SM. Oneshots for any difficulty later.

Additionally, the big tentacle monster has a tentacle attack!
From time to time, the Lurker will cast Beneath you it Devours, which will target a player for consumption by a tunneling tentacle coming from the back of the arena. The pod target will get a red crosshair icon over their head, and the pods will chain a fair distance to other players. Once podded, your team must kill the pods to free a player. Ranged DPS simply turn while remaining on the grate. Melee typically ignores them and keep beating on the boss, as there’s too much travel time between targets.

After the pod is cast, any player can intercept it and either be consumed or quickly dodge back once a white cast circle appears from the burrow.

At all difficulties, players should ideally take the pod around a small manhole behind the group in order to stay in range for DPS.

After enough damage is sustained, roughly 25% of initial HP, the Lurker has had enough and will cast Shadow out of Time - this is your cue to gtfo and hide behind some rubble; the further you can get the better, as areas within ~20+ meters will become covered in filth after the wave passes. (If you are hit by the wave you receive damage, a knockback and a debuff to heals received - don’t kill yourself trying to hide.)

After each wave, swarms of filthy humans will emerge from the back corners and attack your party - they can be easily cleaned up and are more annoyance than anything. Additional adds spawn on the first wave and typically bum rush a healer - AoE ‘em.

After the dust settles from the first wave, Flappy Jr. makes its descent, starting first near the rear police car, then in front-right of the middle rubble pile. Aside from hitting fairly hard, they cast Downfall, a massive cone frontal, and explode over a very big area when they die. There’s a tank for each of the birds - once the first dies, another SooT begins casting and DPS can either quickly burn the 2nd before it launches, or get away and allow the tank to hide without cleaving them. 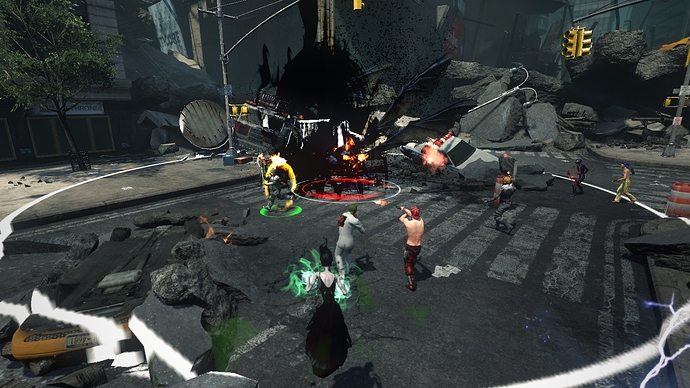 After the first two birds and wave are cleared, the third Flappy Jr. will land in the front-left of the middle rubble piles. Kill, repeat a wave.
Final bird lands in the same position as the first, leading to the last wave before returning to confront the boss. If you happen to wipe once Flappies are initiated, their starting positions will change, but the rotation remains the same.

At this point, there’s a lull in the fighting as the Lurker casts his first filth - DPS should hang back behind the lamppost until filth is cast so as not to place it in the fight. Tanks should use the opportunity to push ahead and try to get to the Lurker before anyone else.

After a few seconds, coming in before the adds from the last wave, come your buff trio to place a trio of circles you very much want to stand in - 4 players to a buff circle, and remember to stand on the grate. The tank without aggro can stay out of the front buff so as to free up a spot and not take aggro before time.

From this point on, it’s rinse and repeat for damaging the Lurker and then standing aside from a SooT and clearing adds before resuming the fight.

When the Lurker is down to its last speck of health - approximately 10% - it will cast Final Resort, which is almost always faster than your little legs can run. Be ready to back off as it reaches 10% or so, and then jump back to finish the job - or burn it down like champions. 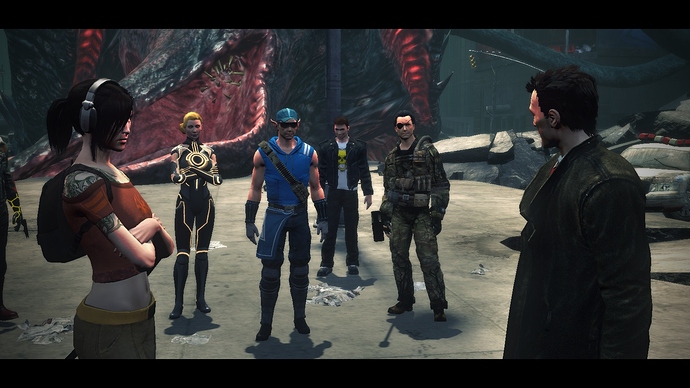 Links to three other guides on the same topic from Tipsui and AWOL with some additional comments on E5 in the reddit posts. I added in some info about rough dps check requirements.

Nobody posted anything in the first week, so I put one up. I’ve got no interest in navigating Reddit, so if there are any specific additions you’d suggest, please post them.

I’ve posted the links for completion. The onus should be on ppl who want to read up on NYR to read as many of the docs as they want. And if someone does want to consolidate the content, then more power to them.

Srsly Reddit illiterate tho… that was a cry for help. X’D

Elite 5 is mostly increased distillates, with a very small chance of getting a radiant drop.

Elite 10 adds on the headpieces to the loot table, and everything is radiant.

So far as I know, there’s no e10 exclusive agent or anything, though the cosmetics change for each tier.

Are the distillates increased again in e10 or do they stay the same as e5?

Yeah, distillates scale each time… iirc, e10 is about 3x 4k distillates, give or take.