One more reason why the event log change is a disaster

I recently made a post detailing how this latest patch was a huge mistake for PVP servers. This will be my last post on these forums as I logged out of the game for the final time tonight after what happened.

Let me preface this with the statement that I know Funcom does what it can about cheaters, though not as actively as I’d like to see. I know lots of people report cheats that go unanswered to this day, however I believe in my heart that Funcom thinks it has the games best interest in mind, despite evidence to the contrary.

On to my post… it’s no secret that I believe the event log change, removing player names, was a huge mistake for PVP servers. You can visit my other thread if you’d like to read why. The reason I’m making this post is because a new reason has arisen that deserves a discussion as well.

Removing player names has GREATLY benefitted the players in this game that actively CHEAT.

This person also bombed through a hefty portion of my base without ANY of it showing on my event log, which is why I didn’t even know about it until I by chance climbed up to a spot where I could see it. I’m going to include a picture of the log here, which only shows a couple pieces of loot decaying which the attacker left behind, the physical chests they bombed being broken, and lastly the messages that say “Explosive jar owned by (my clan name) has lost stability”. Clearly this person knows a cheat to either raid outside of raid time, raid without building pieces being destroyed showing up in the log, or both. On top of whatever other cheats they are using. (We have a returning player to the server that numerous people have complained about in terms of them cheating, so I have a good idea of who it was anyway - which doesn’t matter, because with half the server looking nobody has found a single building of theirs, which leads me to believe he is building under the mesh).

Now, since you removed the player names from the log, you have greatly empowered cheaters to raid bases through illegitimate means. Had there still been names, I’d at least have a smoking gun left behind on the chests they destroyed despite them being able to hide everything else. But not any more!

I’ve played this game faithfully since release and I’ve bought myself every DLC and friends I play with DLC’s as well. But after tonight, I’m walking away. MONTHS worth of progress flushed down the drain because of one player using serious cheats, empowered by the poor decision to inadvertently help him on his mission with the latest patch.

And I’m not the only person on the server with this problem. I have had friends and allies complain to me about things going missing from their bases without the bases even being breached. The player in question has been accused of being able to undermesh into people’s bases to not even have to raid them. And I feel that the only reason why he had to blow up part of my base is because it’s not on ground level where he could undermesh into it.

For the love of the game, Funcom, PLEASE fix this mistake before more damage can be done… it’s bad enough that your patches frequently cause buildings, chests and people’s hard earned progress to disappear. It’s bad enough that you don’t offer ANY sort of CSR support to rectify situations like these. Please think about the ramifications of what you’ve done…

-from an ex-die hard fan and player of the game 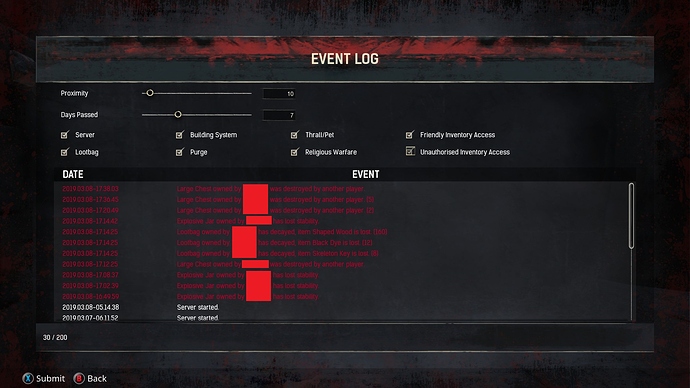 P.s. the red blocks are where I edited out my clans name, as a friend is still playing in it.