Comrades I personally have come to feel that Sinners Refuge needs a wee bit of an overhaul, at least in the visual aesthetics department. One who is not a seasoned player or owner of a Devkit could easily be forgiven for not even realising that this is indeed a faction capital (it should have the bright orange marker). Look peoples I do understand that the ‘Exiles’ faction are largely seen as recent arrivals in the Exiled Lands, and stricken by poverty with the barest of essentials. But surely their faction capital must have a number of seasoned veterans who have been building Sinners Refuge up over time. I mean the poor sods have only 1 Tent, 2 Bedrolls, a small Campfire and a catwalk between some 16+ of them…!? Its not even very well lit after all this time.

Considering how high the ceilings are in there, I feel that there is so much creative potential just waiting to happen. So what could (hypothetically speaking) be added? Well some basic signs of it being a larger settlement. For example, maybe a ramp leading to a second level above the wooden catwalk surrounding the central column in the main chamber. A Bonfire, some more Campfires, a Large Campfire, more Bedrolls, more than just 1 Tent, an Artisan Bench, Fur Rugs, rudimentary Stone Slab table, Chairs, a Grinder, Dryer. Maaaybe even a Merchant…? The specifics of what exactly the overhaul should be are not important to me; they would be better left to the creative minds at Funcom. But I feel that if this area were given a facelift similar to the fantastic jobs done on Flotsam and The Summoning Place, among others, it could really be a truly memorable, standout location.

Does anyone else share my sentiment on this one…?

I agree, it looks so barebones, especially compared to other faction capitals.

Thanks CrystalGoddess. Always nice to recieve a kind word from a friendly local. Haha. Yeah you have absolutely nailed my sentiment here. It is just so barebones and dull, but a mere handful of careful tweaks could make it a truly memorable and interesting location.

I agree as well. Maybe have some Gator heads on the wall, seeing as they are surrounded by them. Have more of them dressed in the Asura type armor. Maybe even an actual wood gate at the beginning (open of course) to show the idea they would close it for defense, pet hyenas by the altar at the back, etc…

The cave could get a bit bigger, maybe go down a bit more? Have some caverns or something going on.

Hey thanks WhatMightHaveBeen! Another possibility is that they can have a wooden ramp leading up through the hole in the roof in the secondary chamber (the one with the 1 tent and 2 bedrolls) and give their capital both an above and below ground area. Just contemplating the possibilities.

I just assumed from barebones, they were dropped as a group i exiles lands and took over cave…recently out of anything.

I go there only for brimstones. I think there’s already too much hostile people to kill so no need for an overhaul.

I personally spend a lot of time farming this cave. (Looking for my very own Grr)

Yeah its my first preference for Brimstone harvesting Zeb. As an Offline Singleplayer, I harvest out of necessity, and dont bother storing tens of thousands of excess surplus at home. If by ‘Grr’ you mean Grrr Legbiter, I actually obtained him in a Purge in the River biome. You could try to set up an outpost there and get a Purge there?

I just assumed from barebones, they were dropped as a group i exiles lands and took over cave…

I have no idea on this one Sera67, that would be an awful lot of people for Conan to save all at once. But if anyone has seen any lore surrounding Sinners Refuge, then by all means post it here.

I think there’s already too much hostile people to kill so no need for an overhaul.

For the record here Wolfrider4594 it is not the enemy spawns which I am asking to have overhauled here. It is only the design and visual appearance of the cave itself. It is just so dull and barebones. There can be no doubt that it is the least interesting capital in the game. Having seen the great job Funcom did upgrading the cosmetic appearance of Flotsam, The Summoning Place, New Asguaard and the Mounds of the Dead, I just feel that Sinners Refuge could use a similar coat of polish.

@Croms_Faithful If you didn’t have such a good rep, I’d think you were pulling our collective chain here.

I’d have never guessed that Sinner’s Refuge was supposed to be a faction capital! So yeah, definitely needs some love if that is the case.

It certainly is Larathiel. I think it is largely due to its coloured marker not being implemented in the base game; for some reason it is currently only used in the devkit version, while we have a generic ‘cave’ one. Although I do wish and have requested it be added to the base version too. 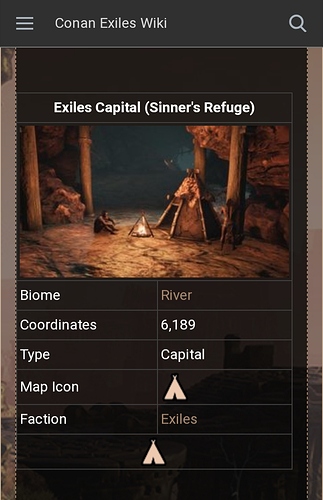 Thanks for agreeing on this one. Yeah 1 Tent and 2 Bedrolls might be a tad bit squishy for 16 or more of them. I kind of just want it to be more interesting thsn it currently is.

I play online, Official PVE. I keep a reserve of everything

That makes sense, and even more so if you are part of a clan. In which case mass production and large stockpiles make great sense. Ill tell you one thing a weee bit odd and disappointing about Grrrr Legbiter. Once you break him on the Wheel of Pain his Peg Leg dissappears. So I guess that it helps regrow limbs too

I do want more spawns added if they “renovate” Sinners Refuge.

Im honestly pretty well ideologically neutral to the idea of more spawns there. So…sure I guess. A new Merchant or two there would be nice. As would if they transformed the Bronze/Copper coins a legitimate in game currency.

The new rope bridges in the upcoming DLC might make a good addition to Sinner’s Refuge. Put in some upper level habitats. Could get a whole “Goblin town” (LOTR) feel to it.

YES this! ^^ I was originally thinking of the Swiss Family Robinson, but that is actually a WAY better example. Maintain the crappy, rudimentary structures (certainly dont glamorise Sinners Refuge!), but have some upper and lower levels of the crude structures. It doesnt need to be ‘nicer’, just more fleshed out and interesting.

Goblin Town is an outstanding example and vibe for it! I would give you additional likes for that if I could.

I dont think conan saved them, they just showed up in bulk, maybe cart broke down and threaten’d by arrows and spells to march into desert.
Maybe 1 got down from cross and saved others, (if they were even all on cross)

Doesnt seem to be applied that all of them got the tree of woe treatment.

Im not sure. But they are all wearing the Bracelet, so they are definately prisoners/exiled people, and not just wayward travellers. Either way, I would just love to see something akin to Bodin’s ‘Goblin Town’ makeover.