This is has been happening for some time now, when I’m building, I place some pieces and with the Repair Hammer i can check the stability and it is good. They normally show 80/60/55/40 of stability, and the game let’s me place them. Then when I come back to the game the next day, some of those pieces suddenly disappear. The event log says they lost stability, but the cellings and walls were they have been placed have good stability like 80 and 60 of stability. When I place them again they show good stability like 55/35.
But what confuses me the most is that some pieces only disappear a few days later. I play the game normally and they are there and one day suddenly they just lost stability and disappear…
I even have some pieces that only have 15 of stability and they don’t disappear, but the ones with higher stability disappear…
Please help me, i have been losing a lot of resources with this. 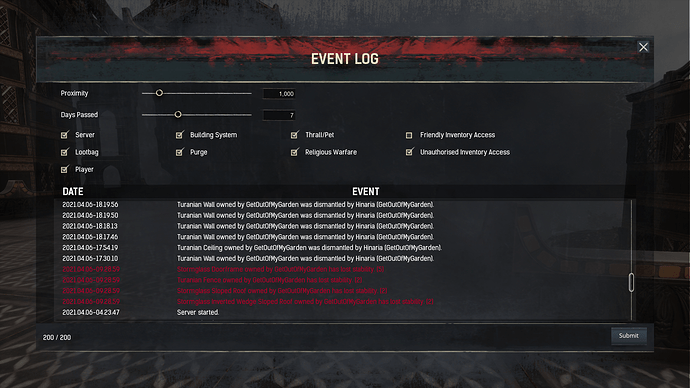 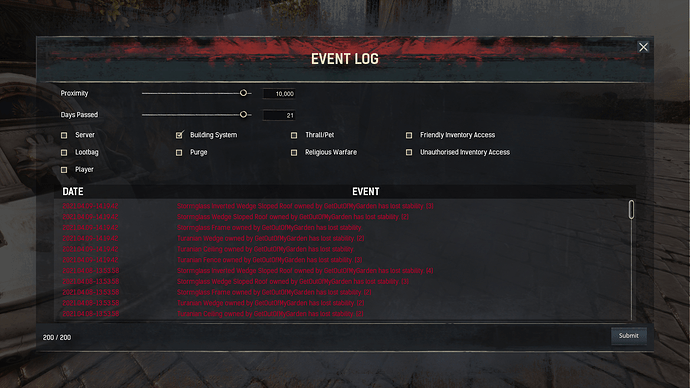 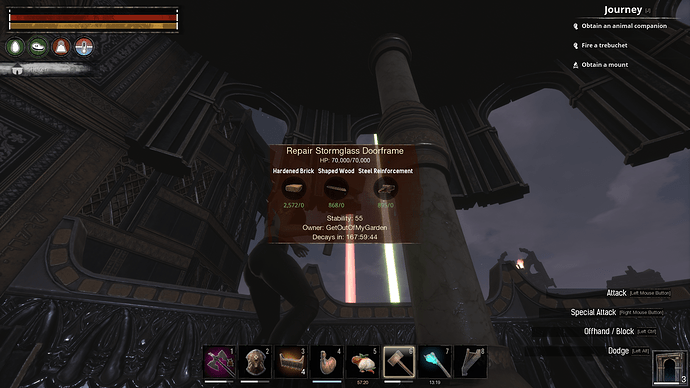 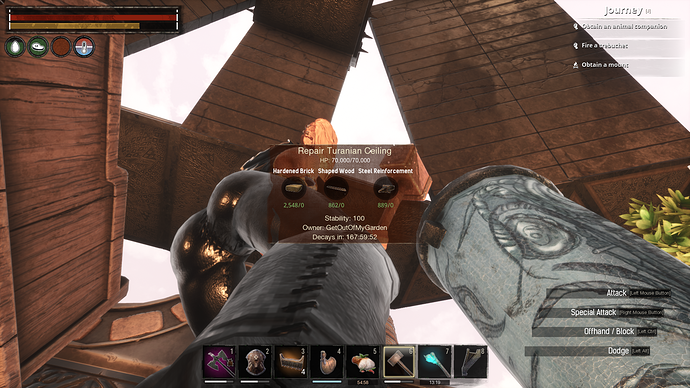 Are you somewhere in the northern exile lands?

I’m near New Asagarth in F9

Not sure if this is related, but I did experience a minor version of this around a week ago.

I have a building that I haven’t modified for around 1-2 years. One day my event log said that a ceiling brazier decayed.
When I checked it was just one light out of many that decayed. Building never decayed or got damaged, and that brazier had been there for over a year.

It’s a very minor thing. But I was left wondering, “why did that happen?”

I even have fences losing stability and disappearing on ceiling with 100 stability, that’s why I have created this post… 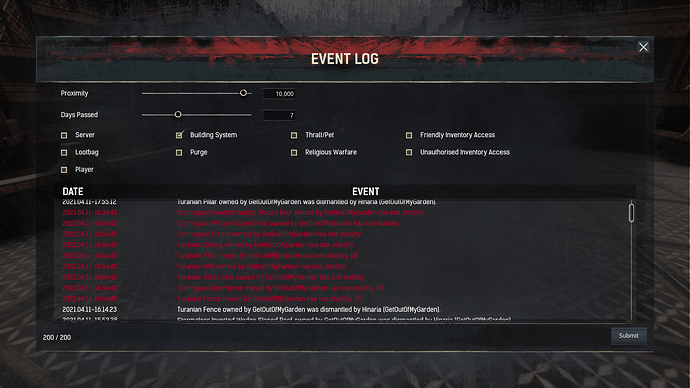 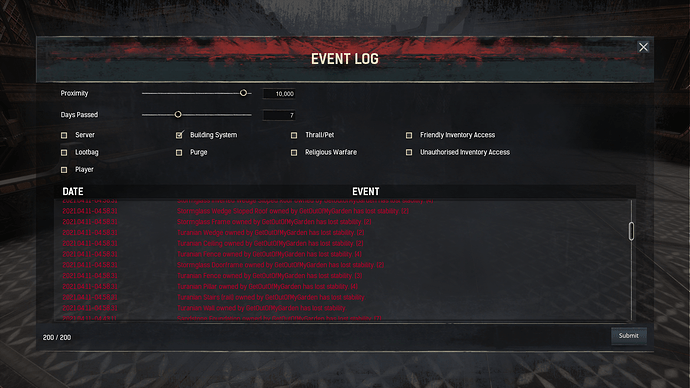 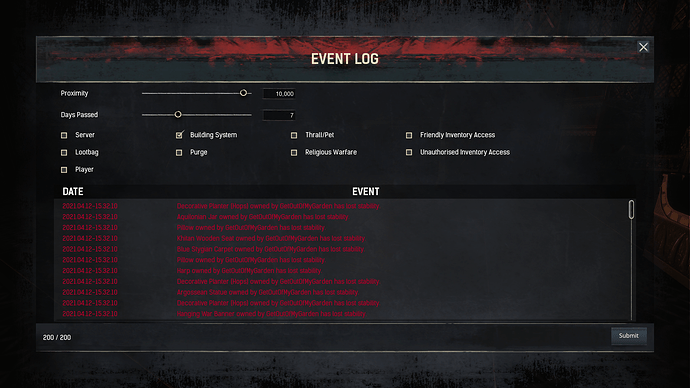 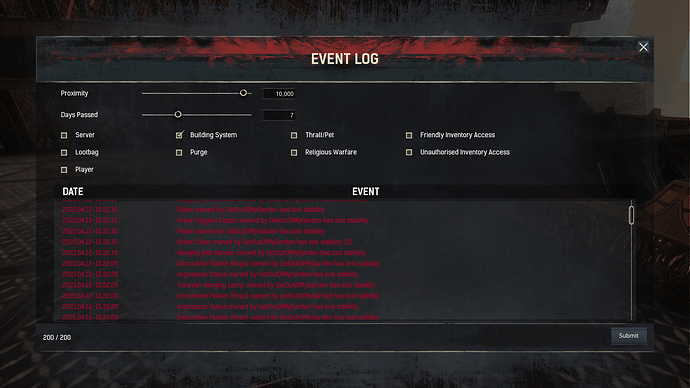 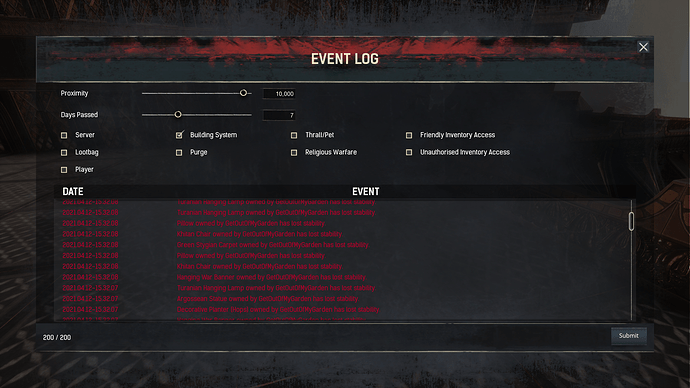 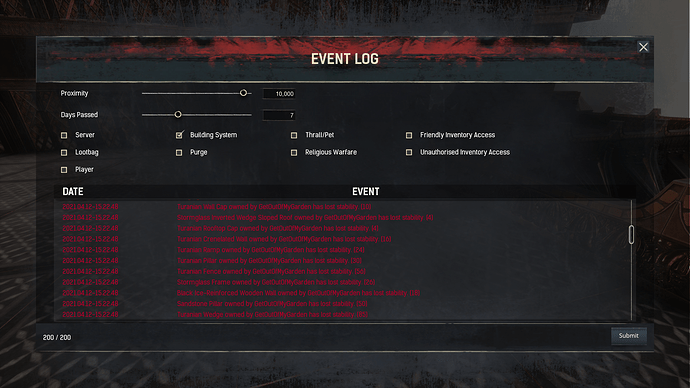 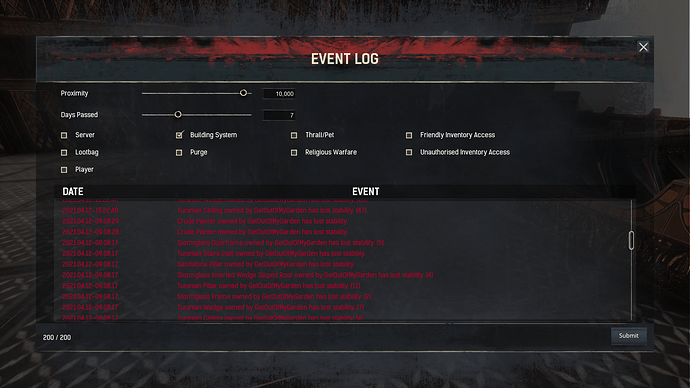 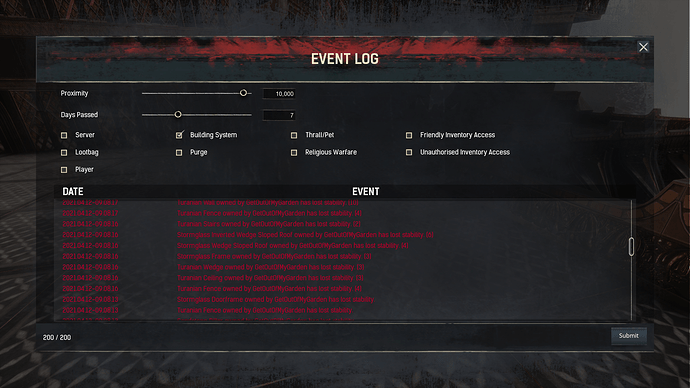 Whats happening at least from my experience is that the stability is snapping to different pieces or not at all when the server/single player session restarts. I posted a topic about this a few weeks ago where I was noticing that when you upgraded peices it would snap to a different stability from the top down.

Its a really frustrating bug that messes with all base peices from sandstone to stormclass. It made me walk away from the game because I had my entire lighthouse I was making collapse on me.because the top peices changed stability when I was upgrading from bottom up.

Basically don’t upgrade base peices, just build them from the ground up with your choses material.

Yes… I think it started happens with the new update…

Two cts. (play there for some years now)

This server #1039 is been riddled with pillars underground and standing torches by The Iron Compagny clan (wich had been sold(wtf) to newbie Player Yabadabadoo a month ago)
What? yeah really lol Conan Exiles never stops to make me wonder.

Anyhoe, the pillars are over the map connecting huge bases to ease the reset of the decay timers.
Like from the vulcano to Seper via the mounds, for instance, but way more and lots are hidden in the mesh.

Since that time - the pillars where placed- the server has (seems to have)issues.
It wás the smoothest EU server around, it seems to have introduced alot of decay errors, alot of stability faults. As if the database doesn’t register/errors in mutations because of the huge lags?

When the server is under a bit of a load (20+)it grinds to a hold since then.
The idling npcs as we all know from earlyer times for instance.

Loading bases after login may take 5 - 10 mins(!).
The hovering@ login, eternal falling, no hp items, is worse too.

If thats the reason, players/clans should be forbidden, prevented(?) to connect all over the map to begin preventing huge server loads?

Secondary- Clan was reported by players 6 months ago or so, but no action was taken.
Original owners seem to have left after the sale.(wtf)

Same old bridges all over the map story, just now use pillars at a few steps interval the amount of pillars is staggering.

Im suggesting that situation has a huge impact on that server, perhaps introducing these kind of errors?
Some1 login that server as admin/ ghost and see the pillars (undermeshed in some places it seems) everywhere? Then decide if thats an issue and consequently delete that clan/ it’s assets perhaps? Just sayin?

Me personally iv’e lost alot last months through- not stability of building parts in particular, but lost stabilty of crates and chests, filled with t3 mats. Annoying but hey, its CE.

Yes… there’s a lot of pillar on the map, maybe is causing some bug.
I really hope they can solve this…

If thats the reason, players/clans should be forbidden, prevented(?) to connect all over the map to begin preventing huge server loads?

building id has nothing to do with what you describe,

now if the person is connecting structure with independent pillars that means each one of them has a different building id. it all depends on how that was built, and that is in effect NOT connected , you will still need to run to refresh bases that does not share the same building id. if overbuilt and spiderlike foundation or pillar spam is done , report them , providing funcom irrefutable proof of building abuse, and funcom will eventually have them banned and offending structures removed from the game, (or set for decay.)

I don’t understand, but you seem to know what its all about.

“building id has nothing to do with what you describe”
I did not talk about a building id?
The words "Building id "are not mentioned previously in this topic?

I probably missed that, sorry.

My view was that the server is so loaded it perhaps results in corrupting databasedata.

The same desync way players experience pets that stay put, dont sync, etc.
Npc’s idling around and only agro mins later. the usual stuff when a server is in high load on ce.

Imo, those pillars do obviously connect the bases, or else they would not have put the pathways over the map, i followed such a path and the pillars where all the same timer, bases included.

Thanks for your reply.

what i meant is that , if the pillars were not attached when placed to the same building. but if they do, as soon as anyone touches anything in that strucutre everything refreshes to max timer.

Hello, you already know something? I’m not building because i’m afraid to lose even more resources…

I think Multigun was asking about your location because certain areas in the north are prone to meteorite damage and the symptoms that you described were very similar to what happens when buildings get struck by meteors. It certainly was the same with buildings on our server that were built in meteor strike areas.

Although, if you are in Foxtrot 9, which is just south east of New Asgard, is not within the strike zone of meteors. So, it is probably not that.

I knew that thing about the meteor, I once saw a base get hit by one. Yes that’s my location. It is really a misteri what is happening. I’m not rebuilding because I’m afraid to lose them again.

There’s other people with really old bases , that are having this problem with stability… Does Funcom know something about this yet…?

To be clear,
yes, she is at the by FastJohhny suggested spot leaning against the hill SE as seen from asgard.

Not in a meteor location.

I (same server) also do have “Lost stability” issues, but not the same( placables, not building items), and in a diffent location ( Eastern Barracks)