Please, let me hide my helmet - or let me cast a potion/spell that creates an illusion of a different armor

Either let me please hide 95% of those abominable helmets, or please give me the following:

Potion of illusion: lets a user change his armor appearance until they get hit by a weapon from a player that is not on their clan. Costs: 1 water orb 5 fiber 5 coal.

Or alternatively, let me change how my armor looks for me on my screen.

Hell no. Run what you brung.
If you want fu fu, then go to a modded server where you can be as pretty as you want to be.

90% of the helmets in this game look stupid. Change my mind. I don’t want to be at the whim of some server that I didn’t rent that could wipe or shut down any time, and I don’t want to have to pay a sub for my own server just to look prettier. There is no reason it can’t be worked into the game, and there’s mods that already do it.

I’d say the reason we don’t have it is because it would kill pvp when you chase down a guy in light armour but turns out there in god breaker, as it is it’s what you see is what you get and it works well, I get your point but don’t see it happening.

I prefer a hide helmet option (PvE)
Give a server option to include a “Hide helmet checkbox”: Allow | Disallow (somewhat like the nudity option)

My honest strong opinion: most helmets look incredible ugly, and they make you go bald yuk…

it would kill pvp

PvP sure is fragile, yet resilient. It gets “killed” by the smallest change on an almost daily basis, yet three years later it’s still here. 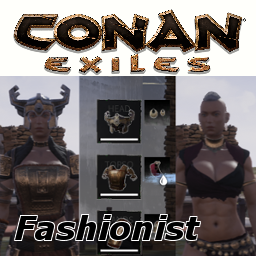 I don’t want to be at the whim of some server that I didn’t rent that could wipe or shut down any time, and I don’t want to have to pay a sub for my own server just to look prettier.

A mod is not the solution here.

I really don’t buy that “What you see is what you get is quintessential to PvP”. Because on the other hand we have tons of people claiming (perhaps correctly) that PvP is reduced to some horse and cat game, and has no room for skill or subtlety. And on the other we have claims that being able to tell the exact armor and build of someone from the appearance of their armor is paramount.

Which is it, again - A perfectly balanced game where the minutest difference makes or breaks it? Or a pointless exercise where an overriding meta determines all?

Not that I have much hope of a change of heart from Funcom’s side at this point - disagree with it as I might, the “wysiwyg” line is theirs. But still, I can have my say and agree with OP for all the good it’ll do.

Hmm if you look at the new armors they introduced with siptah, for example the Night Stalker Set (which is Zamorian (Agility) and Zingarian (Vitality)) you would expect a Vitality + Agility build, but you get a Strength + Agility build. This totally contradicts Funcom’s claim “special armor for each attribute”.

Also the War-Dancer Chest and several other legendary armor pieces.

“Potion of illusion: lets a user change his armor appearance until they get hit by a weapon from a player that is not on their clan. Costs: 1 water orb 5 fiber 5 coal.”

If people were reading my actual post instead of immediately throwing shade at me ala “BRUHHHHHHHHHH PEEVEEPEE BALANZ”, they would have picked up this small yet crucial suggestion. If a player hurts you, your actual armor shows. And the only way this works is either spikes, orbs or pvp enabled.
But I guess with epic/normal armors having the exact same appearance and Siptah in the Mix it doesn’t really matter anyway.

A mod is not the solution at all, and I have used Fashionista. I don’t want to choose between looks + modded private and official. It’s just a QoL issue, not a pvp balance issue.

I disagree. It would just add another element to the PvP situation. Surprise. It would become a tactic to bait people into vulnerable situations. Not uncommon from real fights actually. Feign a weakness, when it is actually a strength. People hate change. But even PvPer’s can agree they would want to look awesome while they dunked on someone else. shrug I say social option is a MUST.

Every time this gets suggested, people bring up WYSIWYG. And that’s perfectly valid concern.

But it could be solved by allowing players to “opt in” on their client: add an option in the client settings that allows the player to choose if they want to see the real armor or the “social” armor.

I think the reason dev team doesn’t want to implement this is not solely due to WYSIWYG-for-PVP concerns. There are probably other reasons at play, such as the effort needed and the prioritization of new features, etc.

I think the reason dev team doesn’t want to implement this is not solely due to WYSIWYG-for-PVP concerns.

I agree. It’s a convenient, plausible ‘excuse’ though (which is not to say it’s false, nor to say they actually need an excuse - it’s their game after all).

There are probably other reasons at play, such as the effort needed and the prioritization of new features, etc.

Which would be entirely fair.

And I don’t agree with WYSIWYG being a viable concern at all but I don’t play any survival games outside of this.

I think this is a major cosmetic boon for a tiny bit of extra gameplay issues, but there are elegant workarounds. I don’t get why people are SO opposed to it.

Wearing a gas mask day and night was one of the nasty aspects of the Great War.

Not all servers have horse and cat game. Those servers wouldn’t like this change.
Besides, patch 2.2 will probably adress the cats and horses as it will be a PvP oriented update.
Funcom did listen to wild surges and surges complaints. We might be in for a surprise as far as PvP is concerned.

Most of my mothers male teachers in school had nerve gas poisoning. Wearing them was not 100%.

If I have to wear an ugly red bucket to keep repairing my lengy weapons, so be it.

Just do what I do - use Silver circlet. +2 str, heat resistance and barely visible with most haircuts (Unless bald)