Purge spawning inside bases WAS reported during test live

I decided to go search you tube to see if anyone had this issue and yes I found a live stream recording by Wak4863 on Apr 29th showing a purge spawn inside of his base. Not only did he say he was going to send in a report but he also said that several others had posted about the same issue in the forums

But the update was still released with this bug.

On our server a boss dragon spawned inside of one of the players bases totally wrecking the place.
Another had several mobs spawn on the roof where we couldn’t reach and they too also wrecked his place.

Can you provide sreenshots of that specific base, from bottom to the top?

Go watch Wak4863 youtube video…Testlive Purges in the jungle conan exiles 2020. The purge spawning inside starts at the 1:06 timer

Yes thank you.
I have the same problem.

This issue has been present in the game since the Purge rework last year.
If a base that is being targeted by a Purge is above ground and/or can’t find a path to it, it will spawn inside, or the closest possible location to their target.

@Ignasi While its certainly true purges have behaved like that since last year, most of us are trying to report a new issue. I suspect if @Huntsmanlance can add some more specifics from his server its the same thing. Purges are summarily warping into what should be valid, pathable, built on the ground bases. Constantly. I’ve had five purges in my solo game since patch 40 and not one has worked right (specifically, as they worked previously to patch 40). I’ve personally posted about my experiences in another thread:

Purge shenanigans update (solo mode): Started a new base up behind Sepermeru on the west end of Iron Breaker ridge. Up popped a ‘Plauge of Locusts’ purge. (Exciting, I havn’t had that one before) So it counted down, the horn went off and nothing. Couldn’t find them anywhere. So I switched on admin and ghost mode to see if I could figure out where they were stuck THIS time. After 5 minutes I found them on top of a cliff across the way from my base. Visual refrence: 4 reapers where stuck …

And there have been a number of other posts on the subject. I fear though that maybe we the players are not being explicit enough in the details to have this viewed as a new problem. This is a new purge problem, and it is an absolutely critical problem. I cannot emphasis this enough (but I’ll try):

Anyone playing solo or on a private server should disable purges until a fix is found/applied.

Funcom should immediately disable purges on all official servers until a fix is found/applied.

Hi Ignasis, the purges now seem to have new super powers. They spawn on the exact same points as before but now some of the NPCs will warp mid fight to a position closer to their target. See the below picture:

T indicates the location of the red crosses (target)
X are the spawn points for my base and their usual pathing (I have had over 20 purges on this specific base (vanirs, yetis, nordheimers, beast-tamers). We always fight them outside of the castle walls, we have never had any issues with them spawning inside, we have only ever had one bugged purge (with a wave of yetis spawning in the rocks).

My first purge after patch: 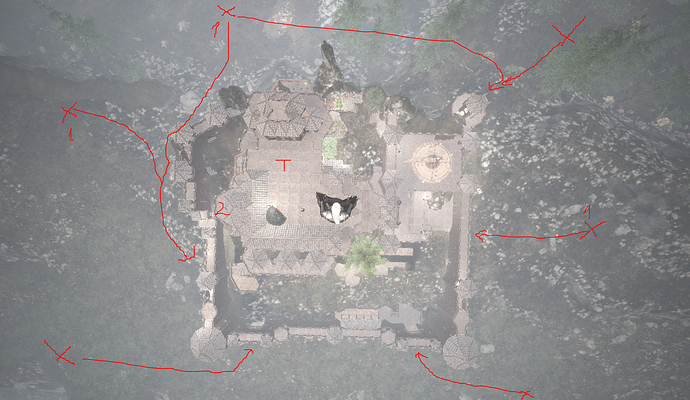 There is a clear pathing way from all spawn points, never a had a problem with purge not being able to find the way to this specific base: 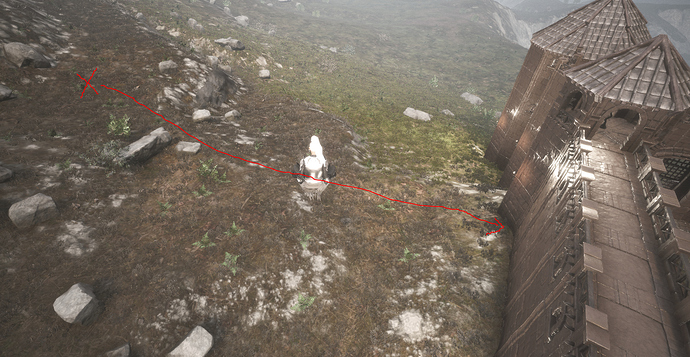 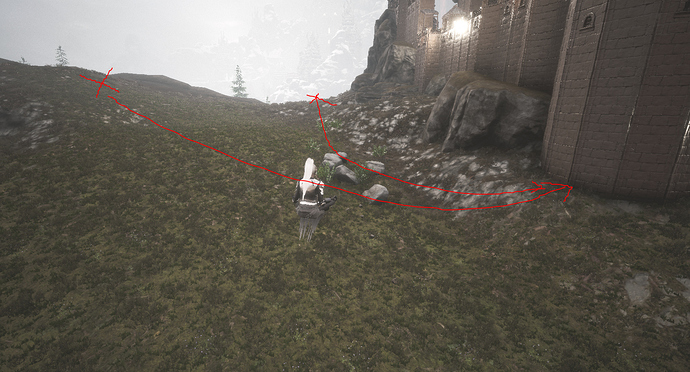 I didn’t think of recording it all and I was mostly the one on the balcony but look at this one. There are 3 npcs, 2 engage me and my follower walks towards the 3rd (the archer in the back) The 3rd warps on position 2 before my follower reaches it:

While this makes it a bit more interesting, I would really hate to have a dragon warp on my balcony

And exactly what I’ve encountered as well. My best case scenario has been they warp inside a foundation and get stuck. Effectively ending the purge. Worst case has been rollback to a pre-purge autosave.

I can only imagine the chaos a surprise dragon would cause.

Ignasis I appreciate your response but this is a new thing that is happening. Myself and several others have had these bases on our server for more than 6 months.
We have seen the older problem and warn any new players how to avoid it.

We have never had a purge warp or start inside the bases mentioned before the update. All of the ones I am bringing up happened right after the update until the server owner could get on and turn off the purge

Thanks for providing concrete feedback that can be relayed to the team. We’ll send it so they can give it a look.

Ignasis if you want to see this problem recorded during a live stream on YouTube below is a link. This was made by Wak4863 on Apr 29th. Go to 1:06 in the video to see the Snake purge not warp…but actually spawn inside the base which was built flat on the ground and had a direct unobstructed path to it

On our server we had the same snake purge happen but we have also had a hyena with the were bosses and the worst was a boss dragon spawn inside.

I can confirm the purge - warp thingy. We also had purges that act differently after the fix. The purgeres appeared as normal, walked towards our base as they usually would do, but instead of attacking the walls and gates (as they normally would) they suddenly vanished in thin air. Turned out they had teleported to a place inside the base, actually on a balcony of sorts. Also one lone purger came walking down another path they usually have been following, I attacked him, and just as I was landing the blow from my axe, he disappeared. I could then for a short moment see his health bar behind me, and next he turned up at the same balcony. After this purge one of our archers were missing, so I ghosted below ground and found him standing on a ground layer pretty far below.

Same happened to us last night. Nordheimer purge. There would be groups of them approaching our base but when we went to engage, they would suddenly disappear. Most of them apparently went into the mesh but finally one group teleported on top of our base (and we were able to capture at least several crafting thralls).

I’m beginning to think its combat mode that causes the warp. From every ones examples, videos, and my experiences, they’re fine up until combat is triggered. I’m guessing whatever changed in the combat AI this patch is causing “valid path to target foundation” to fail when they go hostile, triggering the ‘anti-cheat’ against inaccessible bases.

I’ve never built an inaccessible base, so I’ve never seen what looked like previously to patch 40 when it triggered. But call it an educated speculation.

We are having the same problem on our bases. All are built in accessable locations and every time the purges spawn either inside the walls or inside the buildings themselves. Totally have ruined the fun in playing the game. We enjoyed the challenges of defending our bases agaisnt the purge and now its worse then a cheat fest as they just blink inside anytime you meet them outside the walls. Way to go!!

So I started a new play through in an Official pve server, power lvl to almost 50 in a few days so I can rush t3 building and of course trigger a purge faster. So I have no walls or gates or spikes, just a simple house made or t3 Argo on the foundation’s etc and parts are insulated wood.
When the purge (Nords) hit I can see them spawn away from the house a little ways off, there is nothing blocking them from this point to the house, no trees, rocks, walls, gates nothing, clear straight path.
The first wave I ran to engage and they instantly teleported inside the house the second I touch them with my axe, they where half way to the house when I attack them. I ran back inside and Kill them all with poison and venom arrows but they did substantial damage to the house, mostly half was gone, first wave… 3 bears and 2 elephants did nothing, the 4 t4’s archers did nothing also as they where outside and I equip them with only bows, they didn’t shoot to the inside at all, even thru the gaping hole the purge made, 1 of them fell of her perch when the house started to crumble and fell thru the ground never to be seen again.
Now second wave I did nothing, I let them get to the house. This time, all pets and the remaining 3 archers did engaged after about 5 seconds of the combat start. They completely ignore me and the house and when straight to the animals. Archers kill them, lost all animals but I never helped at all, seem to work half ok this way.
Third wave never came, so I when searching around and I finally found them on the original spawn of the first two waves but this time they where under the mesh, I couldn’t hear them at all either, but I did see the horns of the helmets sticking out of the ground. This lasted for the rest of the purge timer, so around 20-30 minutes or so, not sure as I had lost interest already. Then the purge just ended with no message or nothing and the meter was reset to zero. The mobs that where stuck inside the mesh simply vanished.
The missing archer never died as I had no message of it and no body could be found either, never came back and it’s no longer on the list of followers.

This is a mess and purges need to be disable just like Gods until it can be looked at, tested properly and released when fix.

and just stood there 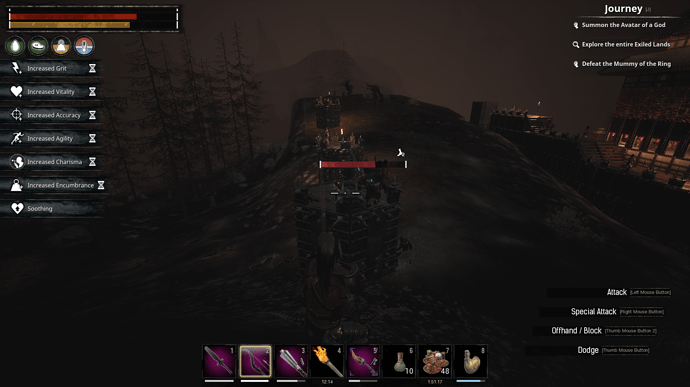 Ignasis, This is NOT and I cannot stress this enough NOT the case.

ALL purges teleport into or onto the bases.
Even if the building is on a plane field, perfectly ‘pathable’ by the NPC’s.

It happens consistently for ALL bases.
This has been reported on the testlive servers and several times in other threads.

This needs to be addressed.
It breaks the purge mechanics. 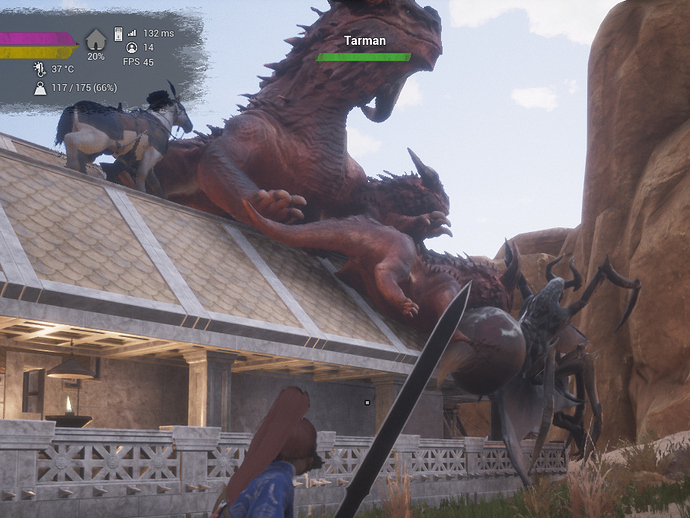