PVE Official, Thrall of other player left near my base guarding

Hello, I am in a situation, that nerves me a little.

Some time a ago an other player left a thrall near my base guarding, blocking in that way my possibility to expand my base in that direction. I do not know the other player and I feel disturbed. Are there any possibilities to handle this ?

Bait a bunch of enemies to it, get them to aggro it, repeat untill thrall is dead or has moved off while fighting.

It is very possible that it wasn’t intentional so you could try asking others on the server if they have forgotten a thrall. I recently found an archer near a base I raided, it had been guarding there for a few days as I hadnt moved it’s guard location when I took it back to my base, so when I logged off it returned to it’s last guard position which was outside the raided base.

This has been a common griefing tactic on my server. It’s one (but not the only) reason why I’m not too sad to see a thrall limit coming.

But yes, luring mobs (particularly world bosses) to fight the thrall, when possible, is the best and probably only way to deal with it.

Thank you for your outstanding advise. I hope I can find a way. The thrall is left on a small unreachable path (only with climbing, I planned to expand my base in that direction with bridge & stairs.

The thrall could not go there without intentionally placing him there. But it can be it was not.

I will try to find a way. Many thanks!

Thank you for your outstanding advise. I hope I can find a way. The thrall is left on a small unreachable path (only with climbing, I planned to expand my base in that direction with bridge & stairs.

And there you have the solution: make a cheap sandstone path up to it, make it wide enough so you can kite a boss up there. Rockslide is especially effective at clearing thralls.

How do you make this path ? I tried on my offline game to build such a pathway, but the boss refused to follow me up the path. Used ramps as well as sandstone Fundament. Think I have to Experiment a bit mor with this.

----Edit
got the idea, stairs of course

Thank you, I am near BG, but I do not think it is your thrall as my base is not surrounded by walls. The description sounds a bit different.

Bring 5 spikes, take a note to where the enemy thrall is. Place a spike exactly where its left on guard. the other 4 around it. go away then come back the thrall should be ported directly on top of the spike dying. use target button to check dmg. 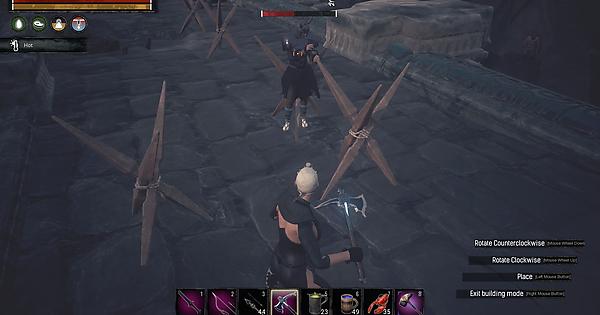 will give it a try definitely.
ty

Hehe, I got already some very creative ideas from you incredible people. It is appreciated very much.
Will come back, when I tried out

Thank you so much.

You run to him… At least at the PvE server I play, no other thrall stands still. They kinda approach you and do nothing.

It blocks the place where it stands

And -additionally- I feel overwatched, paranoid. It spoils my privacy, to look up and see a foreign thrall watching me…

Every night he runs to his master and tells him about the Decay status of my base.
It is a spy, a thorn in the flesh……

A foreign thrall without a base of his master nearby has no right to exist so close to my area. As a spy he has to die.

You can’t build at that spot. It’s kinda like leaving a foundation there, except that you don’t have to worry about the decay timer.

Of course, it might not have been done on purpose

Yes ok and also imposeble to fin out who its belong to.

But a good thing whit the thrall limit also limit this type of blocking.

Yesterday I built foundations around an animal (rhino) and than placed roofs. The funny thing is that this pet used to be mine just before a malicous clan stole everything that was mine. I’m trying to rebuild in the same location and my old pets are really messing up…

I left a thrall with a newbie on the 1006 i think i have to remove him. I think he moved further from the river to the middle area. Still it helped him with the purge

The thrall finally is dead now.
Was a bit tricky, built at first platforms to place the palisades. The trick with the palisades did not work for me as expected. Then I made stairs. Removed the Plattform and he fell down. But was not dead…. Now I tried to get him up again, as he was now standing a bit too close to my base to call a boss……
Finally this did not work.
I decided to call the giant crocodile.
First try: My pets came into the fight and all killed the boss. 5 Pets lost…
Second try: I put the pets/thralls more far away, hoping they would not enter the fight again. But they were not far enough away. Crocodile dead, almost no more losses at least except me…
Third try: I moved all my thralls really far away. The croc fighted against the thrall. The thrall was moved more and more close to my pets/animals by the croc. croc & thrall lost life very similar. I had to move away 2 pets very far, that had entered the fight again.
Finally the enemy thrall (Jonas) died. I managed to kill the croc with a few more hits.
It was an exciting evening at least

Total crazy on one side, but I had a lot of fun.
Thank you all again for your help.

See what the one i spiked was wearing? yes yes xD