Sandstorm damage with no sandstorm

so several times now i have been hit by a sandstorm that wasn’t there. I’m running along nothings going on then all of a sudden i start receiving dmg and the icon appears in the upper left saying sandstorm. But there is no sandstorm on my screen its clear sky’s. So i put my mask on and the dmg stops like it should. but again i don’t see or hear a storm. 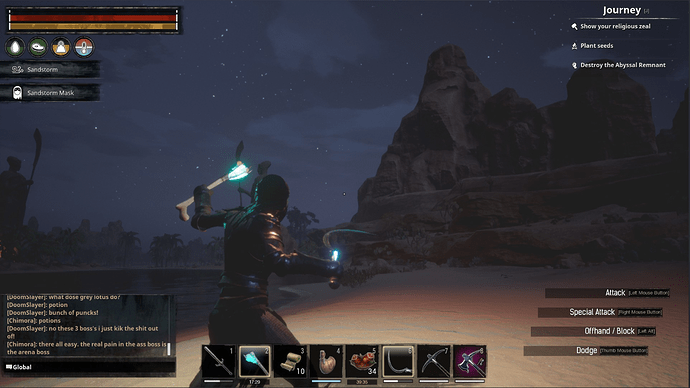 and then there is the reciprocal.
Visible sandstorm affecting the environment, visibility, and lighting… but causing no damage.

It had gotten down right silly.

It’s a known and acknowledged issue, so, it’s on their list. Whether it makes it above the red line on said list is unknown, since it’s been around for quite a while.

It seems to be one of those bugs that will never get fixed, invisible sand storms been around forever. Reported many many times but just one of those things not important enough to get fixed even if it is one of the main draws to the game. Too bad!

sadly this has been a issue on every single server in the game, since… day 1 of release. so almost 3 years now. and im putting my money on it being caused by the majority of all the lag issues that start happening when there are too much buildings and the game engine limitations start showing. meaning they cannot ever fix this

I do believe the “SandstormFix” mod fixes these issues. I personally havnt used it but I have seen a few servers use it so might be worth looking into if you really don’t like the buggy sandstorms

We’re aware of this issue and our team is looking into it.
Thanks for your feedback.

Can confirm. I’m using it to this day and NEVER had invisible sandstorms.

Stop with the same standard answer, it’s never gonna be fixed, that bug exist since EA and modders already fixed so its easy to fix but why they won’t? Maybe they should go back to school or hire proffesional coders instead?