The ground texture detail is still gone in many areas of the map. The ground details are mostly a giant blurred mess especially on the pebbles near Mounds of the Dead. All thralls and other building items render in black until you get five blocks away, then they render in correctly. Skins on furniture blur and flicker. When I exit my base, the outside terrain is black for about two seconds, then it flickers in. It seems every fifth frame is skipping and rubber banding is simply awful now.

I have noticed a similar issue, specifically in the lower mountains, especially the mountains near Star Gazer’s Crest. (I had a base located there). Following the latest patch Sorcery 2.0 I found the ground would occillate between 3 distinct levels of resolution while i stood in place.

1.High resolution (my game is run in Performance Mode only so but still achieves a decent level of rendering to see rocks etc).
2.a mid resolution and then a quick jump to a 3.low resolution which would allow me to duck down and see through the mesh and to the other side of the mountain.

On advice of another thread I have completely restarted that game, removing that base and any previous artifacts, from at least two previous game plays. I have not yet returned to the Mounds of the Dead on this newest pristine game start, but this post, is just a quick me too, to confirm an instance of the behaviour you are describing.

My base, located there, would render perfectly, very quickly following latest patch, but the landscape would sometimes oscillate randomly when approaching my base on foot, or standing in certain areas. Or even standing on in the basement of my keep where the landscape would rise up past my foundations, and allow me to see through the mesh.

It will be several days before I get back to that area of the Mounds to see if that behaviour still exists after my restart, but so far in this newest game play on my PS4, this play through (Playing without artifacts of at least 2 previous complete play throughs, has been the most stable since the drop of Sorcery Conan 3.0 several months ago.).

So no solution here, just a shared experience, and a thanks to you for taking the time to record & share this behaviour that I can now test to see if I can replicate, in an environment that is now clean.

The rendering was so bad I tore my base down and moved it, thinking it was overpopulation at Mounds, but it still didn’t help. And yes, I see three level of resolution. 1. High detail (expected) 2. Then it flickers and 50% of detail disappears. 3. Flickers again and all of the ground becomes a low res blur. I can replicate it every game. Every time I log in. All of the graphic issues I have I can replicate.

dammnit, that is bad news,

I was really looking forward to rebuilding, well I’ll slog away maybe downsize, see what I can get away with. Thanks for the heads up @delirium .

Following the early December Patch, my single Player Game is working amazingly well. We are still not back to Pre-Sorcery 3.0 stability, but it is getting Freaking Close!

Rendering in Mountains is almost completely back to normal, no longer does the game oscillate between 3 levels of rendering. The scenery no longer squeezes past my foundations, and I can no longer duck down and see through the mesh to the other side of the mountain.

Restarting from scratch overwrote the legacy game save that contained artifacts spanning 2 years of updates, patches, and game rebalances, and also spanning many power outages, crashes, and game freezes, and of course all of the last 3 months unpleasantnesses.

My newest gameplay is utilizing a optimized game style. I have a single Large, though not Massive, 4 towered keep near Star Gazer’s Crest. And only 1 non-attached map room so far, I have since the December Patch, been able to visit all biomes and game areas and have played for at least 3 sessions of about 5 hours each, with zero crashes. The game will still freeze, but Freezing is always resolved after no longer than about a minute and are freezes are now infrequent.

So between overwriting my previous game, starting from scratch (removing artifacts that could cause Gremlins), and whatever Funcom fixed with their latest Patch. I am very pleased, I hope this may also apply to your game @delirium

-All the best Exile.

-----EDIT----
I have no idea how the Update has affected Sorcery and the BattlePass Tabs on a PS4, as my gameplay does not utilize casting spells, and I avoid BattlePass tabs by habit at this point, following 3 months of disappointing consequences following those behaviours.

Thank you for your report. Could you share some pictures or screenshots of the issues you found in those areas?

We await your reply.

@Mayra ,
I know @delirium hasn’t had a chance to post here, but I can definitely show you the pre-Sorcery 2.0 landscape rendering issue on the PS4. 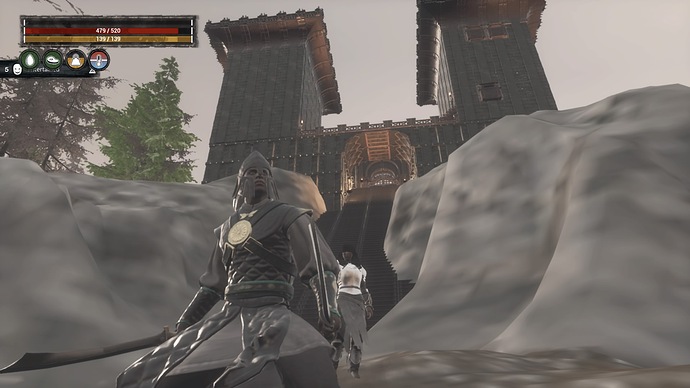 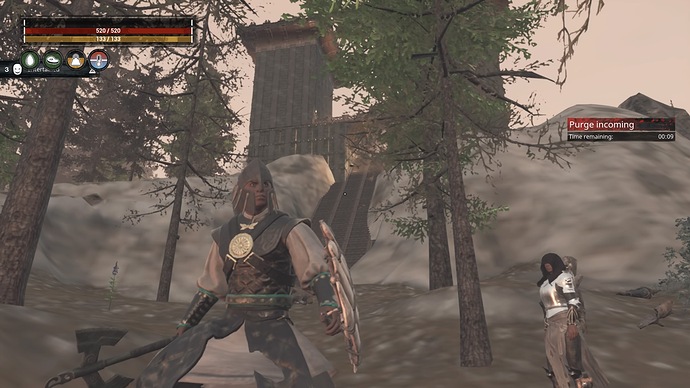 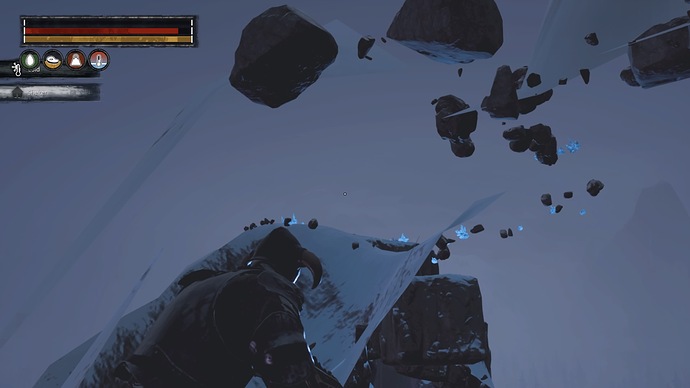 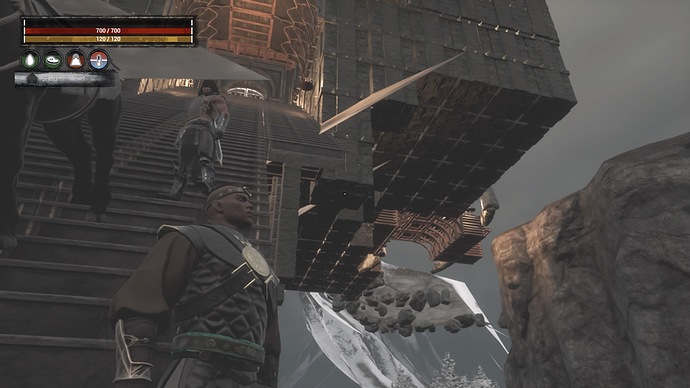 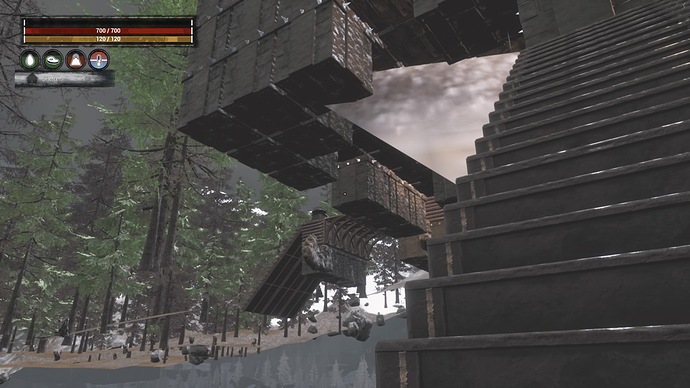 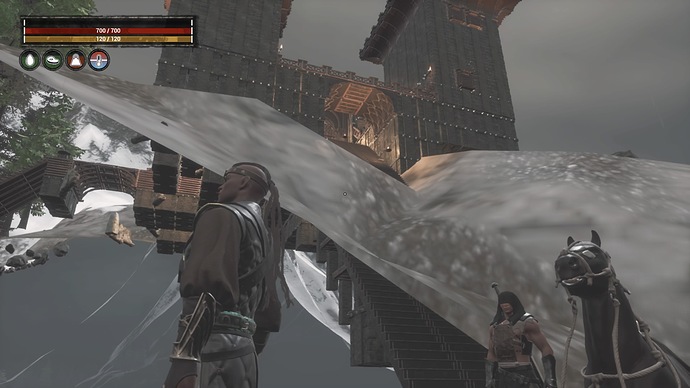 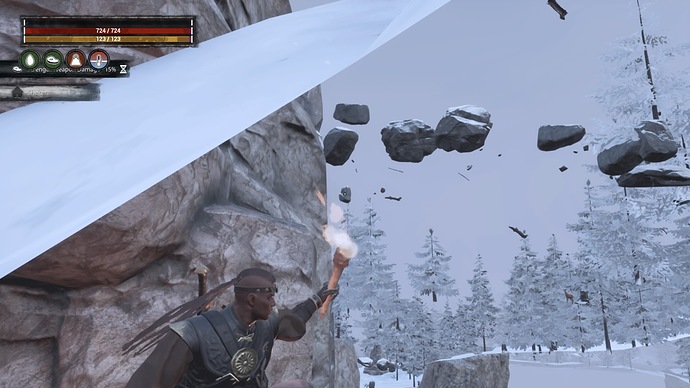 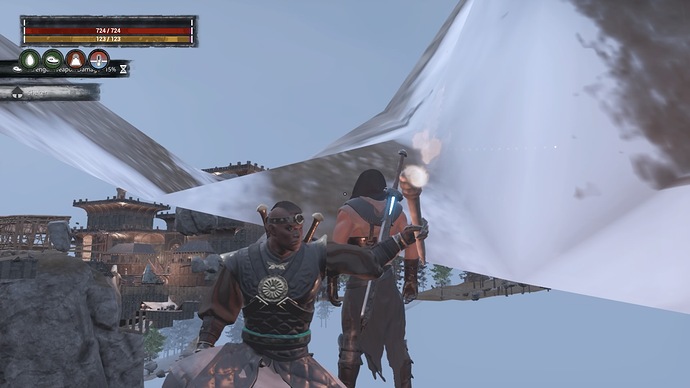 you can see from that the landscape surrounding the base was significantly affected. I also have a pretty great video of mining Star Metal in the mountains above the Black Ice Base.

These were the issues that were corrected by the combination of me overwriting this particular Legacy game save. And by the December Sorcery 2.0 patch.

I say it was the combination of both things because, a second existing game save still suffers game freezing at about the 2 hour mark. The newly created game started on or around Dec.6 has not crashed since the Update.

Mining Star Metal above a larger sized Base on a Solo Legacy Game that spanned 2 years. This video was taken before Sorcery 2.0 Patch.

As I said earlier in this thread, these issues have now been corrected with the complete overwriting of this Legacy Game. And the downsizing of the Base, and the release of Sorcery 2.0 Patch.

EDIT: From revisiting another game save I can say that older game save play is improved, but solo game on PS4 requires smaller base sizes, and slower movement around areas known to trigger Events, or risk freeze crashing. Only on a game that has been created at the same time of latest Update have I been able to avoid Game Crash.

I currently play with a reduced build size, and fewer placeables.

Very thankful to Funcom Team for the Release of Sorcery 2.0 This crap was gamebreaking, especially when the Purge hit.

This is an example of the Landscape oscillating between 3 levels of definition, on a seemingly endless loop. This was the final behaviour that led me to restart my game the same day the Sorcery 2.0 update was released.

I have since rejoined a second existing game and found that gameplay although somewhat improved with the newest patch, gameplay on a pre-existing solo game, with zero artifacts from any previous playthroughs, was bumpy, around bases, and Events. The only way to guarantee a solid gameplay in single player is to start over, and limit your build size.

Edit
I misspoke, when I said substantially limit your base size*. (I have since removed it). You can still have quite a large base, but the more you are able to optimize your base, the more pleasant your game experience will be.

Why should we have to start over or have small buildings this game is a building based game sold for consoles meaning it should be fit for purpose . Funcom should be fixing these issues.They are quite happy taking money for items and buillding sets in the bazaar but if you cant use them what is the point. Funcom need to fix these gamebreaking problems it was a great game before the updates now it is only infuriating to play with constant freezing/ crashes and no communication from funcom on addressing these issues

You are free to accept or demand whatever you feel is appropriate.

I am simply attempting to relay to Funcom’s Community Support Team , and other players, in the clearest terms I am able, the state of the game as it exists currently for the platform PS4 console. Based on my personal experience.

Funcom Community Support have been good enough to interact with me for several months now, and I chose to place my response in this particular Bug Report as it seemed to most closely mirror the issues I have been experiencing.

I am not able to play as often or for as long as I have previously been able to play. But as I discover fixes and shortfalls I try to convey them clearly, and word them as best I am able to in the Forums so that others may add, agree, or disagree, in the hopes of moving forward.

I do not pretend to be anything other than a fan of the game. I am not advocating any behaviour for anyone else. I simply meant to be complete in my observations. And in my own assessment of the game currently I reached a conclusion that I was willing to move forward with. If you have observations or input please share them, I am happy to see the state of the game as it exists for other console players.

Do I hope for more progress, in the future? Yes. Am I happy with the most recent progress, also yes. And hopefully the dialog will continue moving forward.

(I will clarify something from my above statements though, when I said limited build size, I am referring to a build that a player intends to keep and defend in a solo game. I have, and believe I still could still design a massive base in single player. I would only do that, If I had an intention to move that design to some online server for clan use. I simply would not try to play an extended game with a massive build in solo mode, as I recognize my PS4 would not handle the complexities that would present. )

A modest build is still substantial, and for myself, so far includes a four tower keep similar to the one seen above, with the removal of tower floors that previously extended above the level of the uppermost gates, certain other memory friendly modifications, including the physical separation of map-room from the base itself, and removal of additional anti-climb, as it is not needed in single player. As well as removal of many, but not all additional placeables that were nice, but seldom used.

You are correct, you should not accept simply starting over. I had achieved a level of stability in a previously unstable and frustrating game stat, and was happy to share my experience. I hope you are able to regain your game stability through your own conversations, and Bug Reports, deductions and conversations with the Devs, and Forum members. We all benefit from such conversations.