I just want a snow storm/blizzard in the north. =D

I wish i could settle in the north without ever being hit by a meteor… OMG I HAZ AN IDEA!!! what if in 3.0 you can perform rituals to prevent meteors hitting your base :o?

I would love for this game to implement blizzards in the north the same way they have sandstorms in the south, the snow area is my favourite biome and knowing that there is an additional natural base defence mechanism to deter potential base invaders would be a very welcome change.

I think so anyway… Everywhere that isn’t blue-balled: 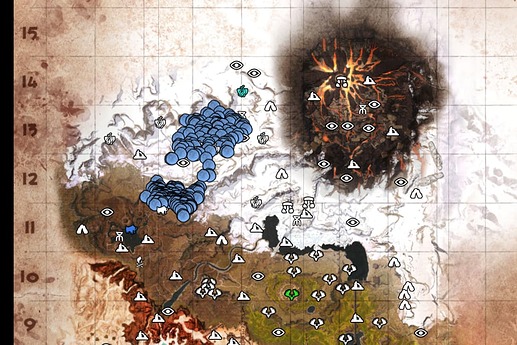 but the best and flattest snow regions / plus the ones with resources nearby are all in the blue circular area D: everywhere else is rocky and barren

I dunno, I’ve never wanted to base in the snow but when treking there are some pretty nice looking places to the east of the Black Keep - on either side of the bridge N/S. Around Dragon Mouth and the Highway too me thinks.

I am going to give a snow biome base a go, I have mainly been in the desert regions

what if in 3.0 you can perform rituals to prevent meteors hitting your base

What if you can preform a ritual to summon a meteor to hit someone’s base?

And some beasts that can attack you inside the Sandstorm, you know, like they show you in the video when Conan is fighting alongside the girl. Its even mentioned in one of those pieces of paper you find that there are beasts inside.

This aren’t all or are not the real spawn points. Once I build a base at a place where no one was placed at all interactive maps I checked and my base get hit by a meteor more than one time.

But what I figured out was that you can calculate possible times when they come out of the data in the logs.

But wouldn’t build my main base there anymore.

I just want a snow storm/blizzard in the north. =D

If you can/want to use mods:

I know this isn’t a solution. I’d also rather have it in the base game. But it’s a nice simple mod that may help you out, in case you are not aware of it.

Blizzards yes, it’s literally something that lies on the surface (like armor stands) and something that people ask from the very beginning and ask constantly. I also think that the difficulty of life in the snow biome should be increased. A severe blizzard with a strong drop in temperature will give a sense of hot food, a fire and warm clothes to existence when the player goes to mine star metal. To literally sit by the fire with a mug of hot tea in a warm fur coat and wait for it to end.
And I also think that at night the temperature of all biomes should become a little lower than during the day. You know, it’s not hot at night in the real desert.

I can also recommend using this mod. We’ve used it and the sandstorm version from same person. They are both great. Have died several times in both. You can customize the sandstorm danger level (damage, monsters that appear, locations, etc.) to your tastes. Cant remember if thats available for the snow storm but we love them both.

Bundle up and good luck!!

It seems it’s not possible

Don’t know if this is the right section to ask for this but… Will it ever be possibile to have (maybe even in a limited variety as it is for Fallout 4) mods for PS4 players too? I was “arguing” with a friend about this some days ago and he was of the idea that it would not be possible in Conan Exiles, due to online gaming. I’m not into online adventures 'cause my web-line well, not realistically solid to navigate and play online, but was wondering if there is a chance to have some modding in…

A lot of people who seem to know have repeated many times that the decision for allowing mods or not belongs to Sony and not Funcom.