So where are the strength equivalents to the "Skelos Cultist Master" and black corsair armors?

As the title says, they are missing in the game.

There are plenty of Armor pieces out there that offer strength weapon bonuses. I’m not sure what you are wanting exactly?

Do you want a cultist set that offers strength weapon bonus?

Maybe Funcom might consider it for a future update?

Idk, but the BP has a HP + follower damage set I think which is even better for your purposes… sooo go give them money and kill people in pvp

Do you want a cultist set that offers strength weapon bonus?

Nah, he wants a multi-stat item (2 stats on a single item like the skelos) but with str damage instead of agility… and no, he doesn’t care whether it’s skelos or not as he’d end up illusioning it to something else anyway

he just wants stats and to be a bit loud

The Theurgical Aegis Armor has +follower and + strength. It’s the first item in the Battle Pass.

Nah I think that’s the one I was referring to above and has + Health and follower damage
Edit: Seee? 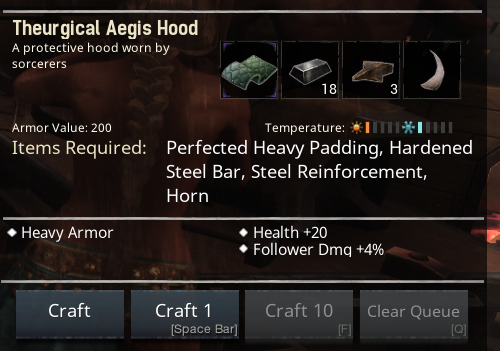 Oh… nvm… it’s heavy so PvP-ers will avoid it

if that was medium it would be quite nice

Yea, should have checked more closely. Memory is fading.

Yes heavy is still on the losing end.

There are plenty of Armor pieces out there that offer strength weapon bonuses. I’m not sure what you are wanting exactly?

See what I am talking about?

What weapons are currently the meta? Spears and 2-Handed Swords? Or Short Swords and Katanas?

If its still the former, then 25% Agility Damage =/= 25% Strength Damage. With the old system it was important for items to give similar rates of values with attributes as this would directly impact when you got perks as part of your build. With the new system where items give stats instead, it is no longer as important for a 1:1 parity.

I’m not saying it is fine, but I am not going to say its imbalanced either. There’s not enough data to support one stance or another yet.

Hmm… could it be to offset the lack of corrupted attributes for that tree?.

They are in the next age - Age of Warriors

Hmm… could it be to offset the lack of corrupted attributes for that tree?.

There are A LOT inconsistencies in the game. I am not surprised anymore.