Star Metal Meteors Do less or no damage to player structures

Me and quite a few other players in my clan have been playing since release and we built a substantially large city in the northern snow area. spent weeks building a citadel and tons of other ridiculously massive structures. but i logged on to find they were riddled with hole due to star metal meteors… i was wondering if it would or will be made possible to either decrease damage done to player structures by said meteors or if it could just be turned off all together. i noticed when they land into the environmental statues they just embed into it. i feel like if that were implemented into player structures as well then there wouldnt be a fear of losing lots of progress. Looking forward to hearing back! this fix would literally be a blessing to us and many others im sure. even just disabling it in a pve c or pve server would be amazing.

Sorry for you. That is a called badly chosen spot than.

Think about other ppl on the server (your clan can have maximum 10 ppl server limit is 40)
so imagine the meteors embedd into your structures no one else could get starmetal than.

On the other hand we made a city and I know what a pain in the bumm to make such a thing (lots of grind)
But YOU have to do something.
Afaik meteors are kinda on the same spot like every time they fall.
And they fall from the same direction always. (south to north)

Make a “hole in the city” where they land build around in a manner that they can fall into the spot undisturbed.

and given it is a city on PVE I bet others can access it too. Win-Win?

Same thing happened to me last summer with a meteor shower falling on my outpost right in front of my eyes on a private pve server and building damage was off. Half my outpost was destroyed, so i don’t think you can do anything about that…except moving on and build somewhere out of the big area surounding the big frozen lake.

spends three weeks on huge base in north

meteor crashes through the roof and destroys critical support pillar 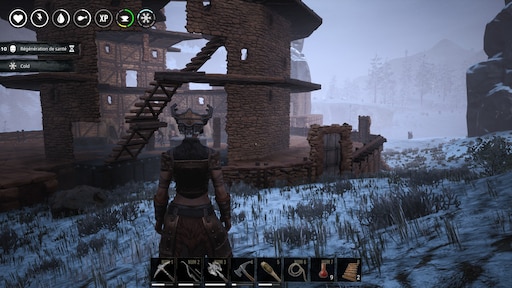 Id leave it like that, give it a ‘deserted ruin’ look

a pity we dont have placable rubble

Anyway I do not feel that should be changed. just adapt to the situation.
And how is it that the meteor wasn’t hit there earlier?
I mean erecting a city is not a few hours worth of work.

EXACTLY mate.
Do you know what?
At first, when it happened i was pretty sad for my named thralls losses and stuff but then everyone on the server came to get a look of the “new northern ruin” so it was pretty funny after all + the big mega firework next to my char was just awesome to watch

seeing the nice things even in disasters.
Sorry for your loss tho mate.

But without it you would miss all the experiences you listed above.

I second this. The problem is that the meteors fall randomly, it’s not the exact same spots.

Someone mentioned earlier that building there would “prevent other players from getting star metal”, it won’t, starmetal falls in the forest below more often than above it. Besides starmetal is trash and at least on our server we would happily give it away if it meant our buildings were safe. Our place (personally) is on the tail end of the meteor area. They fall there seldomly, maybe once/ twice a week. We didn’t even notice till one of our buildings was hit.

My point here is that the area north of the forest, just past the two massive statues is a very nice flat surface area to build on, just kinda a waste of a great building location. Random meteor strikes really do limit building in a spot that feels perfect for building.

Look it’s a survival game with a deep building mechanic, if we can build a small town over the lava why can’t we safely build where meteors fall, it’s kinda counterproductive to the concept of “building anywhere and everywhere”. There is no other spot in the game where a game mechanic prevents construction. I would love to see something done, what op suggests is a small tweak to the game, not a major change and would not affect any player or server negatively. I like it.

How can anyone complain about a natural event destroying their structure?

You knew the risks of building in such a place, and if you didn’t at first you should of known after you saw a man-size hole in your building and a meteor on the other end. Build somewhere away from the meteors or build smarter using the terrain as cover. Don’t try imposing any optional or removal of in-game meteors falling. I’m sure it sucks when it happens the first time, but don’t act surprised anytime after that. Enjoy the ruins!

Yet lava and sandstorms don’t one shot buildings. Personally my clan is not opposed to taking building damage here and there from the meteor strikes. However they seem to one shot every building block they touch, it’s a bit excessive; when they hit one of the giant world statues they just embed themselves there. Also no need to be so aggressive Ed, it’s just a suggestion; what this thread is for

Also it’s difficult to use terrain as cover, if you had actually read my post you would note that I mention that the general spawn area of meteors is the same, however where meteors fall within that area is different, we spend allot of time in that region and have yet to see a meteor strike the same exact location twice.

Anyway it would just be nice to build there (it’s a really nice, pretty chunk of land) and not worry, that’s all. Yes I get we can build anywhere else, yes I get a meteor is a meteor, but in the end this is a game and not everything needs to have that perfect fidelity (I.e. lava & sandstorms) if it means more players will enjoy it if some mechanics are slightly different.

fact being , 10 ppl grinding while building the city. We popped the main portion fairly quickly. nothing hit anything until i finished the main citadel. I get they could do damage but the fact they can embed in the wall of a already environmentally placed structure, but plow through player made structures is ridiculous. there is no defense. it goes through one end and out the other.

it doesnt matter, i could have made a black ice 50x50 cube and a meteor would go 100% through it and destroy it in one blow. thats too much. also yes we do have it to be opened to players and we would let them harvest it no matter what because i want ppl to see our city. but even if i said , “hell no this is our starmetal” it still falls in so many other places its not an issue.

The thing is this suggestion has been posted before, and it again stems back to people being blind to their surroundings when they build. Whether its having a giant crocodile spawning inside their base because they didn’t consider the hostility in their new base or having meteors strike their base. If it happens at first I’d say its a learning experience. When you want to stay in that area you have to deal with the consequences.

Sandstorms shouldn’t 1 shot the base, lava should not be safe to build in but that’s a different discussion.

Don’t mean to sound aggressive, I just think its ridiculous when people ask for a game to be easier, when its already easy as is.

You are definitely interpreting this differently, we don’t want it easier, we just want want to broaden the berth of one building location. This in no way makes the game easier, he’ll make the meteors spawn more frequently in greater quantity, just don’t allow them to one shot 50 blocks of foundation!

We’ve got no problem with occasional repairs but these things plow through anything and everything, we’ve built a massive, thick wall and still they slice right through everything like there’s nothing there.

They already have it pretty toned down, given the size of the meteor’s they should honestly do a lot more damage. The fact that it only plows holes and takes sections of your base as opposed to the entire vicinity is pretty low on the damage scale.