Over the years many things in this game have changed. Some changes were positive, some were rather negative. With each change some old players quit and some new players started playing.
One thing that could bring a lot of old players back would be legacy servers. Specific servers that are played on an older version of the game. One example could be old roll (before dec 2019) servers. It has been done by other games like ark before so I’m sure funcom could find a way to make it possible aswell.

People have asked for this before but the topic kinda disappeared so I decided to bring this question up again. I would like to hear the opinions of the community and also of funcom (@Community ).

https ://youtu.be/1Z6zoralLi8 WE NEED THIS PLEASE . We need legacy servers so many people will come back to the game watch this video

This is like Classic Warcraft. It may be easy to set up a legacy server, but the development costs are a mass headache when you consider how many client types there are to maintain.

I would only agree to this if certain conditions are met:

And I wouldn’t be willing to budge on those demands either. If you wall want to play on your very outdated version, I don’t want a penny of dev support going towards it. The game does NOT need to allocate resources to cater to this niche.

Only 1 legacy version is allowed. No 50 billion different versions, you guys get 1. That’s it.

That sounds very reasonable. If there is a ton of different versions then people would be too spread out to make it even worth it anyway. For that 1 version there would probably have to be some sort of poll or something so it actually is the version that most people want back. I personally think most people would want the old roll pvp back but maybe some people disagree and want something else instead so we would have to get peoples opinions on that.

No support of any kind. No patches to fix bugs, no mod support, no special dev kit to make mods work with that version, no admin support for people cheating, nothing. Absolutely nothing

I can agree with that aswell as long as that version is working properly when it all starts.

Zero development resources will go into it. No official servers period either unless players agree to a monthly fee to pay for said servers. Once again, no admin support of any kind.

I think that would be solvable aswell. I know quite a few people who would be willing to pay for legacy servers. It could be a monthly fee or it could just be some sort of “DLC” or whatever you want to name it that gives players access to those servers.

And I wouldn’t be willing to budge on those demands either. If you wall want to play on your very outdated version, I don’t want a penny of dev support going towards it. The game does NOT need to allocate resources to cater to this niche.

And this is assuming if they even have the older version available. If not, then deployment would be impossible.

Though I’m going to add a 4th point:

A lot of hyperbole and false claims/information in that video

but sure, I agree with @Multigun - if they’re gonna do it - do it like that.

I’m betting the one server per area they add will be empty… No one actually wants to play antiquated Conan… they just like to complain and use “changes” as the excuse for leaving a game they’re burned out on.

Or simply change current client setting via a server mod.

What do you mean?

Yeah I just saw that.

Everyone will be wondering which servers will get the axe now, ( I know I am , heh)

I’ve literally just started on a new one, barely used my base!
I hope they at least give a good amount of notice before they start deleting, at the very least I can dismantle it and save re-farming everything again.

As for legacy servers, I don’t see them happening for Consoles , but I guess it might be fun to revisit.

Something I just remembered. People complained about the Siptah patch. Base Conan Exiles was what? Around 40GB? If they did a Legacy branch, would everyone who wants it be willing to agree to NOT complain about a 40GB (or whatever it is) download alongside the current ~115GB game?

This discussion reminds me of Runescape, which launched an apparently very successful “Old School Runescape” variant some years ago. The thing about that was that players who played it didn’t really want “Old school”, they wanted to cherry-pick updates and features.

So considerable developer resources were put into updating and adding new content to the “old school” game, which was naturally resources that weren’t used for the “main” game. Now, I wasn’t playing actively anymore when this happened, so I can’t bother finding statistics on how many players actually played this “Old School” version, but apparently a large enough number to make catering for their needs worthwhile.

The moral of this story is that I don’t really believe that Conan Exiles players really want a legacy server any more than Runescape players did; they’re going to want to choose which new features and updates get into their version of the game.

The moral of this story is that I don’t really believe that Conan Exiles players really want a legacy server any more than Runescape players did; they’re going to want to choose which new features and updates get into their version of the game.

Pretty much this. Whenever legacy type things are done in a game like that, usually the game is well over 10 years old.

Conan hasn’t been out long enough to warrant this. Unless you just play on Exiled Lands. That’s as close to a legacy experience as WoW Classic or Everquest Progression is. Probably even more so. 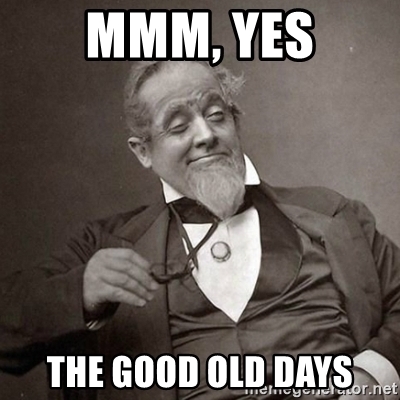 Great idea of having option to play old exiles with old combat system and before thralls were added. Hosting non dedicated server is fine, no need for official ones.

EL was changed many times too.

Yeah, after the last patch I had the same thought:

Nostalgia has no cure. We cannot actually travel back in time, and trying to recreate the past doesn’t really work, either. We have changed, our social surroundings have changed. Even in the same environment, we wouldn’t feel the same as before. Treasure the memories you have, but do not try to recreate them.

why not? project zomboid for example allow you to choose which version of a game you wanna play

You can setup private servers with older Conan Versions.

Here is a How-To: