Hey there everyone… New to the forums. A group of us have a private server and we have been enjoying the game (besides all the buggy behaviour with thralls and purges but that’s a different topic).

I like creating bases. It’s my thing. One of the members of my clan wants a nemedian castle and I eagerly went to work on it. I make something like 12K hardened brick, 5K steel reinforcements… etc. Obviously this has been a lot of work. Here’s the issue. I built the castle at the top of a cliff and the ground isn’t level. I did my traditional build where I used foundation pieces to make everything level and then built up from there. My issue is that the nemedian foundation looks like stacked logs whereas the walls are brick. When I saw the castle I made from lower ground I found it looked a little goofy. I read that the way around this is to use a pillar, ceiling tile, and a wall attached.

The issue is that the castle is pretty much built out. It’s not possible to swap out the foundation with a tile without sequentially removing the foundation and then adding the pillar, ceiling and wall. That’s not a big deal per se, but I’m worried that everything above will collapse when I do it.

My friend is the admin so perhaps there is a setting to prevent collapse for a short time while I do the swap? Maybe there is another way without admin commands?

Thanks in advance for the help.

Pythagoras beams could be your savior. You could add the mod, use beams to support the superstructure, replace what you want then remove the beams.

Thanks. I will look into this. Any other options? I also read that Lesser Building Placement Restrictions option might be something I can do… Does that allow me to use a wall to “skin” a foundation?

Yes it does but its still bound by stability drops. Pythagoras can build out from 100 stability as far as you want and eliminate the need for any pillars… its great for big builds.

Hey darthphysicist, what do you mean by being bound by stability drops? If I have an exposed foundation that I want to “skin” with a wall, the foundation remains, does it not?

You might be able to expand 1 ceiling square out as low as you can connect and the use pillars underneath.

LBPR is probably the easiest, as you can just add walls to your foundations.

) - the stability drops darthphysicist was referring to would be if you still wanted to remove foundations. Phythagoras Beams is particularly effective against that as they transfer stability sideways (so you could run a line of them across the bottom of a set of existing walls, making sure to give full foundation support at at least one end, and then remove the foundations in between).

But if all you want is to skin the existing foundations with walls, then as arthurh3535 says LBPR is your best bet, since that will simply allow you to place walls on the sides of foundations, and the foundation will indeed remain in place.

Alternatively, if it can wait until update 2.7 releases, that is supposed to include the ‘pick-up any supported building pieces’ feature - so, at that point, picking up the foundation should also return to your inventory the walls that it’s supporting.

I think it specifically mentions cascading back into your toolbars. I’m not 100% sure it allows you to pick up a foundation and it returns all the items above it yet (I think that is still a plan).

I haven’t seen issues with Pythagoras Beams, but dang I still think its some black magic that can fail any moment. I know how it works and that alone should give me confidence, but color me superstitious.

But then again, I’m the derp who will run a pillar to a mismatched floor (they don’t line up square to square, triangle to triangle) and call it good. So take that with a grain of salt.

An in game fix (but a lot of work) would be to build cheap ceiling s out from the bits that you want to swap. Connect these to each other and you should have a frame around the castle.

This should provide enough stability for you to swap out one square of foundations at a time for pillars and ceilings.

It sounds like a lot of hassle but the only way to prevent large collapses without mods.

Who builds a stone castle on wooden foundations???

Well, other than this bloke, anyway: 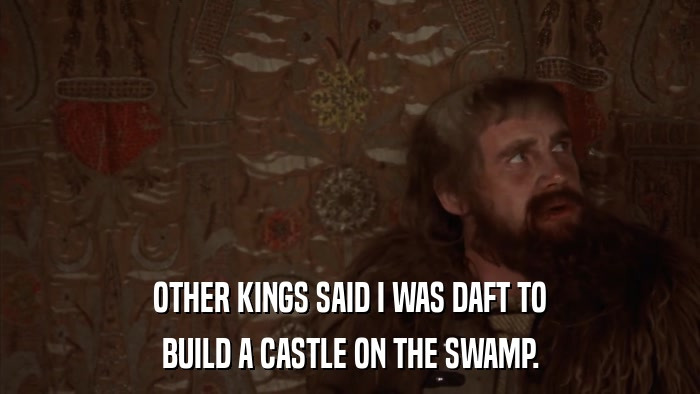 I haven’t seen issues with Pythagoras Beams, but dang I still think its some black magic that can fail any moment

They would need to fundamentally change how Pillars work work in the game for that black magic to fail heh heh. Maybe even the stability system as a whole. Which would likely result in many vanilla pieces suddenly blowing up too, so, there ya go.