Thank you for the new reporting update Funcom!

The best way to do this would be to report straight from the game,

My guess is that this is work in progress because now we have this: 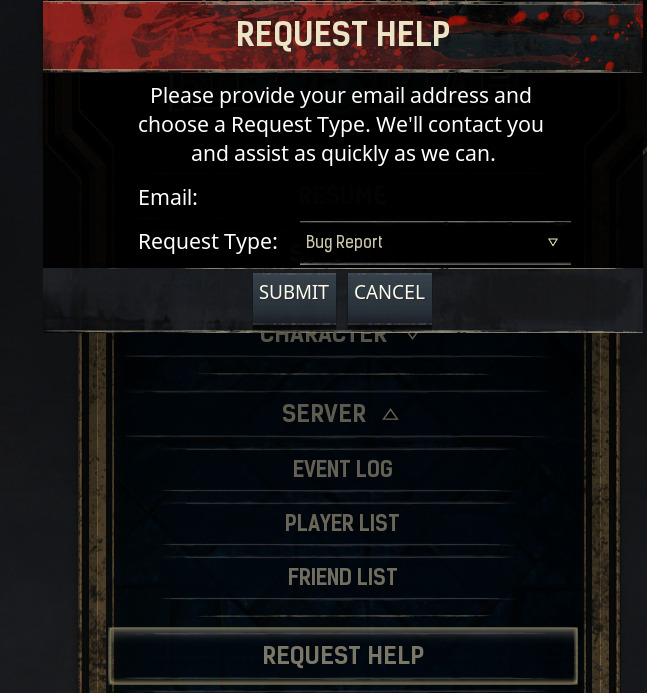 Not quite there yet but still …

Oh, that would be awesome! And I’m not talking about reporting people. It would be really nice if they fleshed this out properly, so we could report a server problem (e.g. a zombie server) without going through the Zendesk form.

Ingame reporting like the bug report above would be amazing. Also having active GMs like in WoW or others who can immediately pop in and deal with an issue in real time and not several days or weeks later would go a long way to stopping cheaters, greifers, and other problems.

I don’t remember which stream it was but it was relatively recent, where they said they didn’t wish to tie FuncomID to a sort of verification process. They considered it to have more cons than pros to have everyone need to present an email address, verify, and have password (and encryption/hash for those) for players just looking to download and play.

They could make the FuncomID on the report only visible once submitted to the Zendesk Admins and anyone else looking at the report would only see a empty box.

Well, in general, you should still write your mail. They MAY check if it corresponds to this funcom id. But there is a feeling that they don’t check any of this.

They should start BANNING for fake reports. I put together a clan to fight back against the alpha clan, and they just brought in a speedhacker to run around with us. And they report US. I got a permanent in 2 days! Since I had the video, permanent appealed, but the base is already deleted. And most likely most teammates do not even know how to ask for an appeal. Surprisingly fast processed their complaint (2 days). This clan has a huge storage spam on ice lake. My report has been hanging for a second week.

I haven’t played WoW for many a year and I never had much need for GM assistance when I did, but the few times I did need them, response time was in (at least) double-digit hours, never ‘immediate’. I know what you mean though.

Which is still not immediate. So if you’re currently being raided it won’t do you much good.

I still think in-game reporting is a near-must and obviously faster response times would be great. I’m just saying to be realistic: even in a subscription based game like WoW, assistance is rarely if ever immediate.

Please be aware that the in game reporting system is not final and we are still working on improving it.

We are taking the opportunity to test it even more now that 3.0 has been releases on TestLive.

Thank you for your patience and understanding while we work on this.

It would be nice if you had to log in first before reporting someone and maybe have an exact character selection based on what characters you have on official servers, forcing you to select the one you’re trying to report

This is an excellent suggestion.

Thank you for the heads up !

They MAY check if it corresponds to this funcom id.

Blocking of content in the game, such as dungeons, obelisks, resources, and other areas of the game.

The bold portion is too ambiguous and open to interpretation. How the heck are people supposed to know what other areas of the game means with blocking content?

We could have a message come up when trying to build in the correct areas , “The god forbid building here” .

Thank you for your patience and understanding

This goes both sides you know

. You are awesome guys and gals, keep up the good work

Let me share my opinion here which many may not like but it’s ok!
Camping equipment like campfires and bedrolls should be allowed everywhere except dungeons and vaults. However their decay rate should be independent no matter the settings. This way if these items touch the ground, no matter the settings they decay in 3 hours. They should not have claim possibilities, so different pve players can put their bedrolls close without a problem. Placing a bedroll or a campfire should not destroy a spawn, so we must be careful not to place it next a croc

.
Then I wished for a tool that will apply levels of building restrictions , so admins do not have to wright down pages of rules and police their servers.
Private servers is the way for everyone to play as he enjoys and think it’s best. You cannot ask for this luxury in official servers, but we need more tools if possible please.
I want more building restrictions and number of builds on each clan, but bedrolls and campfires out of it. No builds in the starting river, only survival neccecity!!!