since some time now i like to create a weapon with a “LONG HANDLE”, but i not get it unlcoked, not even with a LV 4 carpenter npc on the Carpentertable. is here someone, who knows how i can unlock it? Thanky you.

All sort of handle have been group into weapon handle since the economy update. What weapon are you trying to make?

thank you for answering,

i was trying to forge a exceptional Starmetal-Greratsword, with legandary status.
sadways i only have the normal handle. Under search item, it can’t be found neither.
Funy thing is, it not even apear, with a lv4 carpenter to. Tryed diferent carpentet-tables, but that did not help to. I could swear this item is not in the game…

It is NOT in the game anymore since they combined all weapon handles. 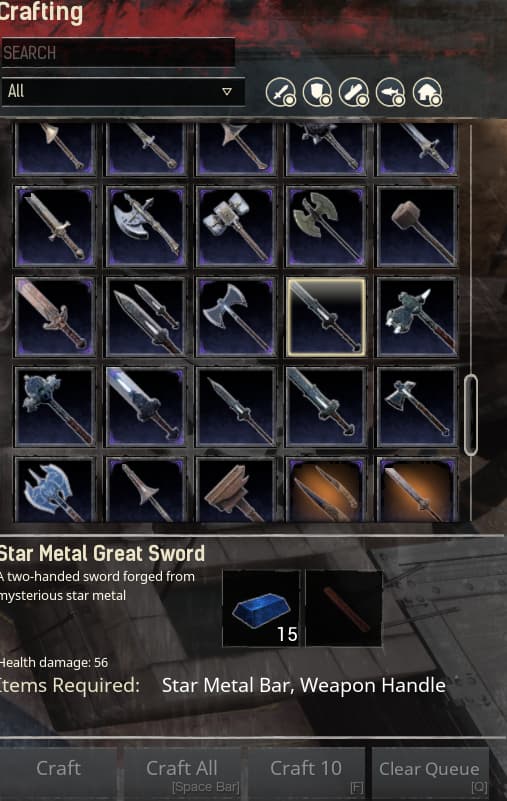 Thank you for your replay,

i can craft the normal Starmetal Greatsword ofcorse, but i hoped that i find a possebility to craft a stronger version.

And flawless and expectional grades are gone too!

Jump to patchnotes. Jump to changelog. Greetings, Exiles! We’re very excited to announce that the much-expected XBOX patch is finally upon us, bundling the content of several major and minor updates and introducing hundreds of improvements, fixes, and new additions, making gameplay more enjoyable and visceral! [image] For starters, the temperature system has been overhauled, as we’ve changed how building and clothing pieces protect your characters against the weather conditions, as well …

Now you have to have an BLADEsmith (T4 only) blacksmith to craft the strongest version of that weapon.

And flawless and expectional grades are gone too!

I suspected as much, but seeing as it is Xbox, I have no clue where they are at in the updates.

Oh, thanks for the correction! I don’t know why I wrote edgesmith…Fixed it, thanks!

And just for extra confusion, the lances still have their handles too, if you’ve unlocked those.