The Purge - from the VentureBeat article

Recently, a few journalists took a peak at some of the upcoming features, such as the Purge and the Swamp/Jungle. Those lucky sods! 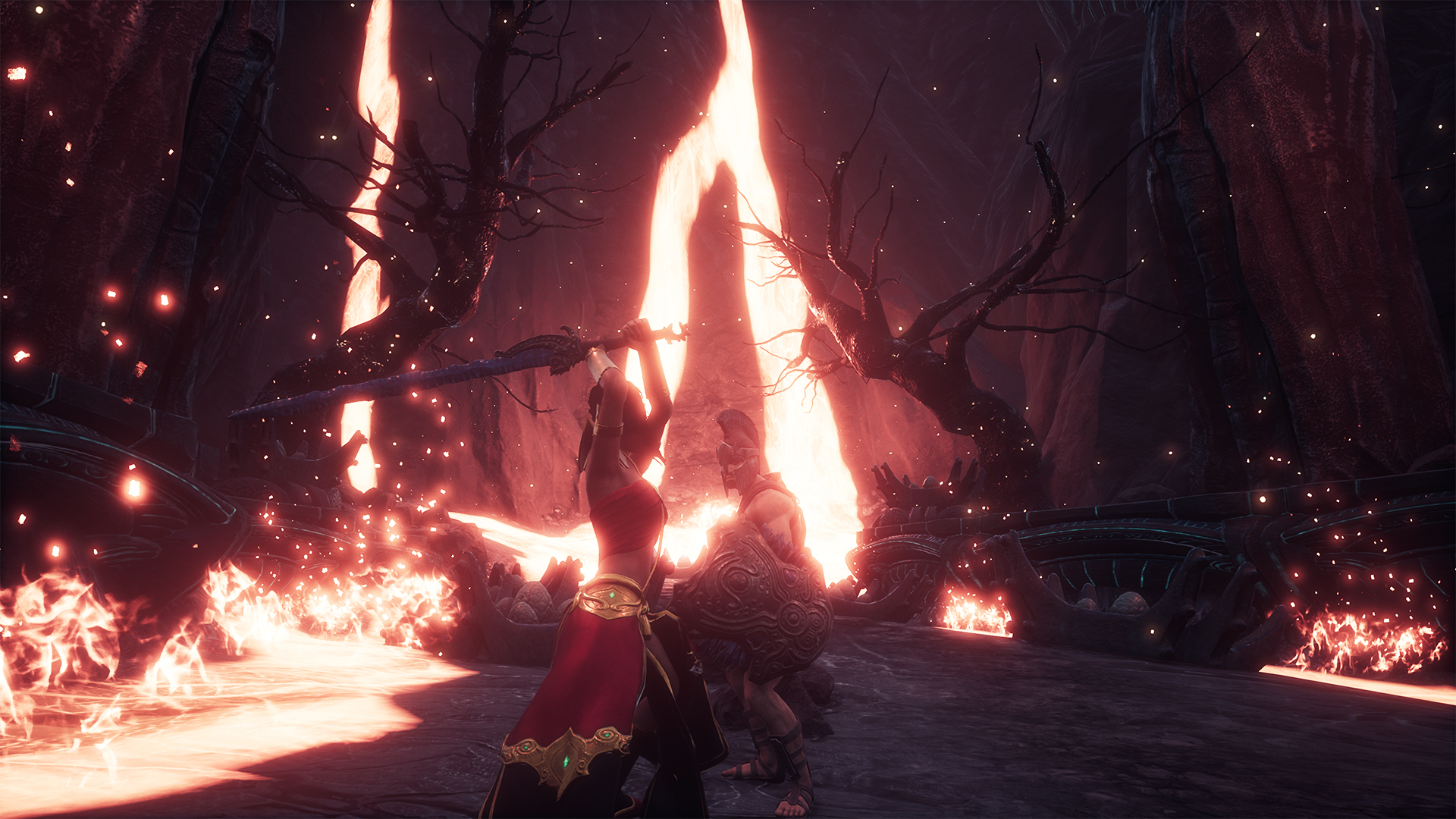 Conan Exiles will exit Early Access on May 8 with a new combat system, maps,...

Funcom’s open-world survival game Conan Exiles will leave Early Access with an improved combat system, new biomes and dungeons, and a new system called The Purge that will keep players on their toes. It’s slated for a full release on May 8 for PC,...

The article covers a lot of topics, but I’d like to focus on the Purge, as that’s one of the biggest upcoming features.

Here are the paragraphs from the VentureBeat article specifically about the Purge:

A major mechanic that Funcom teased back in March is The Purge, an in-game event where waves of enemies besiege a player’s base whether they’re logged in or not. Each player has a Purge meter — and if they’re in a clan, all the players share one — that will fill up gradually as they play. Once it fills up, their base is at risk to be struck by The Purge. What enemies you face will depend on the region you’re in. If you’re up north near the frost giants, then you can expect some of those to show up swinging. Bylos says that building your base on top of a mountain won’t save you either; undead creatures can tunnel through the bottom into your fortress and attack you anyway.

This sounds awesome. We don’t know much about the Purge Meter, aside from the fact that it might grow faster if you have higher-tier crafting stations inside your base. We’ve yet to see a robust list of the craftables that affect the Purge meter, and by how much. The developers might not be forthcoming about this information, so it’s likely people will need to figure the numbers out post-launch.
I’m glad to hear that they figured out a mechanic to attack cliff-top bases, since that might’ve have been the sole way to avoid the Purge. From the sounds of it, the Purge might be even more vicious for players who build inaccessible, cliff-top bases!
I wonder how balance will affect building a high-tier base in a low-tier area: Will your T3 walls be assailed by hyenas? There are more aspects of the Purge that are left to be revealed…

The Purge can occur on both player-vs.-player (PvP) and player-vs.-environment (PvE) servers, and whoever sets up a server can control how it behaves. For instance, they can customize whether it only happens on weekends and how long it lasts. It’s a system that can act as an equalizer between weaker clans and stronger ones on PvP servers. If you’re staking out a rival and you notice they’re about to get swarmed, you can jump into the fray and attack alongside the non-playable enemies.

The Purge has been a huge component in how we’ve been discussing balance. It’s kind of the ‘missing piece’ of the puzzle. It seems like it’ll keep alpha clans busy, focusing on defense rather than offense. If so, this will be thankfully received by the official servers. Something to keep the game more balanced, no matter how many hours you’ve put into the game.

“We consider this to round out the feature set of the game,” said Bylos. “Conan Exiles was always this game where we wanted people to try to build — in PvP they needed to build protectively to defend themselves against other players, but in PvE we always thought that part of the in-game loop needed to be closed off.”

I have some other hopes for the Purge system, but won’t go into detail here. It sounds great, and we’re all looking forward to testing it out.

You can’t hide from the Purge!

If devs will make the npc easy in fight like now, the purge will be weak function.

I can make out a few significant changes that will result of this:

Thanks for the article share, Theres a few insighting which i may of never considered in the upcoming purge. (Alot i figured due to the info they gave us) But still +1! Great share.

This is exciting news on the Purge. I can see one problem though, but its a great start on implementing the Purge to the game.

One problem (that I hope the devs are already working on) - consider that right now, enemies are leveled according to their zone. The lowest level enemies are along the Great River. But as people level, they learn higher and higher level construction techniques. What’s to stop a clan from building T3 structures, walls, and entire bases in the Great River region? I mean, if the worst enemies the clan faces is a howling hyena or two against T3 structures along the Great River, what threat is that? I hope there’s a scale or some balance to what the Purge can send against a player home/base, but based on its material level as well as its region. Thus, a T1 structure along the Great River shouldn’t have as strong of an attack as a T2 or T3 in the same area.

And one issue, not so much as a problem, can also come from clever player base design vs. AI pathing (players love to exploit AI limitations). I hope the Purge has instructions for how to attack a base that is built upside down, off the ground, attached to an overhang, like this:

Will the undead be able to tunnel into this base or will they simply pop up under it and still not be able to touch it? Just thinking . . . .

I’m guessing that the base you show would be vulnerable to the Dogs of the Desert. I’m assuming that the Purge includes some of the human factions as well (though I don’t think that’s been confirmed yet).

Bows can damage building structures now, so archers would be able to destroy bases like that.

I think that the Purge will randomize the sorts of enemies, so for one Purge you might fight off Frost Giants, then on the next you’ll fight Nordheimers, and on another Purge, you’ll fight the Undead. This will help throw a variety of enemies at the player, to test where their weakpoints are.

The Purges have been said in the articles to be scaled according to the sort of zone you’re in, including:

So when the randomizer chooses which type of enemy will attack, it likely takes all of these numbers into account to determine the faction.

But all this is speculation based on a few articles — we’ll only know for sure once we can test it out ourselves! And hopefully, the developers will be able to provide a lot of added insight into these mechanisms.

Since I have wild lafe spawning in my base, my guess is that they will spawn from any rock ceiling and destroy it from with in.

So there are many threats now for player built bases/castles/cities: the sandstorm/storms, randomly incoming monsters or bossmonsters, the purge, the decay system, meteors and ofcourse other players. And don’t forget the admins of private servers

. I think that is enough for launch

.
Puh, I think I have to earn a medal, when I would be able to build a city beside all of these building threatening mechanics.
Although I will try it.

This looks great, I am excited.

How do you defend against undeads coming up from your cellar? Reminds me of an AoC quest.
I guess those of us who build on mountaintops are going to have to leave a buffer zone between foundation and living space.

Each player has a Purge meter — and if they’re in a clan, all the players share one — that will fill up gradually as they play. Once it fills up, their base is at risk to be struck by The Purge.

Knowing how FC handles things I would expect clan name change to reset a purge meter back to zero.

Knowing how FC handles things I would expect clan name change to reset a purge meter back to zero.

What will actually happen is you keep your old purge meter from your previously named clan, and you get a new one, Bam! Double purge! lol

I think these people will definitely miss a lot of fun then.

this sounds great, but it also sounds very complicated. I am very curious how this will be handled. If it is done as promised it would be really awesome!

Yeah I’m super excited about this. Even if it is a little buggy at first it’s going to add an exciting new element to the game.

I think I’ll be ready for it.

I am looking forward to this… cant wait.

But … how do we know what base is going to get hit if there are multiple bases that a clan has.

I believe it was stated that the “largest” or most predominant base would be the primary target. Thus, the Purge is intended to be an “equalizer” for clans and a challenge for SP players.

Could be they attack them all?