Thralls walking through walls and doors and being killed

Read this and then this.

I dont want a “possible path” down… Thats the flipin point. If there is a possible path down, there is also possible path up.
I want my archers at a safe position at pillar-foundations without any stairs to it.

Never the less: Thanks for your effort!

I want my archers at a safe position at pillar-foundations without any stairs to it.

Just build a way up away from thrall’s position. Or build a doorway. Animals can’t walk through a doorway.

Or build a doorway.

Thats exactly the archers, who are still porting around. The ones which stand on a triangle ceiling and behind is a door.

Will test again at the evening.

This 1-2 thralls/position are totaly “bugging” out.

See first the triangle ceiling piece and behind the door: 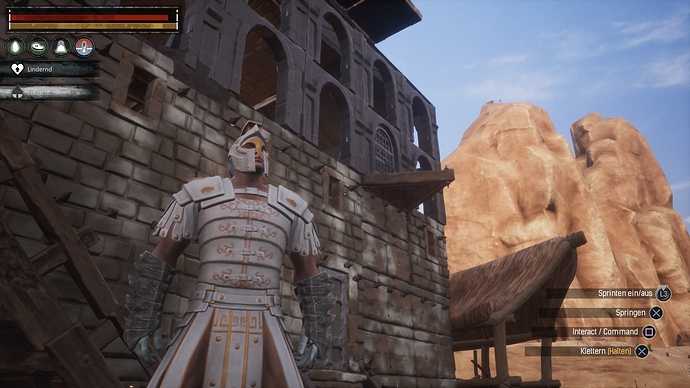 I think the problem is, there are Hyenas to the west of it. Probably in range of 50m. But NO line of sight (my building is in the way).

So I put the archer there and set it to your settings.
Attack everything
50m attack distance
50m chase distance
use ranged

I just went 10m away and the archer ported down…

Yeah, can reproduce it all the time… Its so annoying. She is up for like 5-10 seconds.

And now imagine having spikes under/next to such foundations/ceillings where you put an archer. Exactly because of that I lost my only lvl20 archer

Remove the door. Just a doorway. Door blocks a way down for thrall, that’s why he teleports. And there most be a clear path from his wedge to the ground.

But then enemies can also attack him (close range)? Thats what I dont want to begin with

But: Wouldnt you say its a bug, that the thrall ports to begin with? I dont want my guarded thralls to port - EVER.

When there is NO door the thrall moves on the spot, but doesnt port down.
I put in the door - thrall ports down…

Showcase without a door and then putting the door in, resulting in porting thrall:

But then enemies can also attack him (close range)? Thats what I dont want to begin with

What enemies? Animals? No. Animals can’t go through doorways. Humans? Humans are weak and your archer will kill them faster than they get to him. Also, you have melee thralls on the ground that will defend your archers. Duh…

When there is NO door the thrall moves on the spot, but doesnt port down.
I put in the door - thrall ports down…

Now that you have fixed the teleport issue, go and test various behaviour settings that fit your thrall the best.

Also, you have melee thralls on the ground that will defend your archers. Duh…

Nope. Thats just an outpost with 2-3 archers at high places. One fighter (lvl20) inside + a lvl5 horse

As I have several outposts with always at least 1 fighter and 0-3 archers, I am running out of the thrall limit. Main problem is the big mainbase with so many openings where the purge came ~1year ago. When it didnt bug out at my mainbase… So I have quite alot placed there. Thats also where my lvl20 archer died…

Also for me thats definitly a bug. Just because the archer has no direct path, when it shouldnt even move, shouldnt result in porting around.

Its even worse in PvP, so that you build a base on purpose with no access to the ground and suddenly your guarding thralls port around…

But could this be intentional since they do not want unreachable thralls? And that they just “forgot” to mention it?

Unreachable in what terms? PvP -> use explosive to destroy foundations/pillar.

PvE? Why would NPCs care about that? Except it is really against the cheese-tactics against bosses, where you put 4-5 archers on foundations and let them kill a worldboss…

@Hugo can you ask the team if this behavior is intended:

Exactly! Conan Exiles is moving toward realism and having archers out of reach, which forces enemies to destroy foundations and walls, is considered “cheesing”.

It’s much more realistic to have archers teleport to the ground. Didn’t anyone learn in school about the teleporting archers from the middle ages?

PvE? Why would NPCs care about that?

Purge. Devs want thralls to defend the base against purge even when the player is offline. Cheesy tactics vs purge is not okay. Purge don’t use explosive…

Well, as nothing was in the changelog, that thralls cannot be placed at foundation/pillars anymore, without porting around, it has to be a bug. Or Funcom forgot to add it in the changelog…

Sadly we dont get any answers…

Sadly we dont get any answers…

Asking for the answer once more:

Teleporting of defensive archers - intended or a bug? PC Discussion

After the current patch there is no set of stances / adjustments available to set thralls (archers particularly) for base defense so that they a) do engage foes and b) do not teleport. Before the patch players used to postion archers on buildings or building pieces (like pillars) to keep them out of the range of melee fighters. This strategy seems to be invalid now for the reason of teleporting. Lots of players tried to verify this or figure out a workaround but nothing seems to work. So plea…

It happens to all thralls including melees inside houses. Having a clear path up/down does not fix it either.
It seems it is an issue when they lose line of sight to the target. Also, one of my outer melee guards that is set to chase 50 went down to rotbranch assisting me fighting it, got knocked down and stayed put there assuming its new guard position right on the rotbranch spawn instead of the front of my house. That was 50m away from its actuall guard spot! Another got displaced under mesh the other day and I had to rescue him to pull him out, losing all tis gear sicne the loot bag was also under mesh.