You are unable to enter the epic version of Treasury of the ancients in kopshef province with a group. When you try to enter as a group, each member ends up in their own instance.
There are some decent level 39 blue weapons in there that are good for PVP. Think you guys could fix it in a jiffy?

Isnt Treasury of the ancients a solo dungeon. Thats also what aoc wiki says if you google it. Btw the weps are not good anyway. Got 2h and 1h yesterday from sanctum with about same level and 10 dps base damage more at least each. 2h 50 -》64.

Isnt Treasury of the ancients a solo dungeon.

The normal instance is. The epic instance is not supposed to be because it’s epic…

And That’s great that you got your preferred weapon but for some classes the treasury weps are better for pvp due to the crit stats. you’re just going by base dps and cr when comparing. Don’t offer up reasons that funcom shouldn’t bother. It’s a bug in their code they should be able to fix in short time. 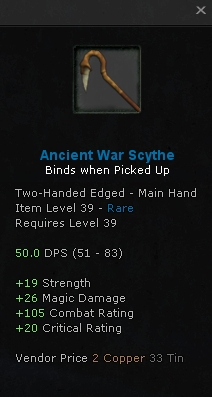 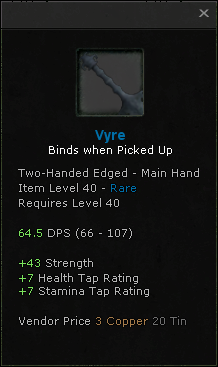 There is more to a weapons overall usefulness than just base dps depending on class. This sanctum 2he is ok but it’s better suited to conqs or barbs.

all of those lvl 39 blues in treasury have good dps bonuses. The fact that they are unobtainable due to funcoms broken game is what’s at issue with this bug report post. Save your feedback on why you think sanctum weapons are preferable to you. This post wasn’t put here to ask for it. It was posted to bring it to Funcoms attention.

This bug has been around for very long now, back in 2012 I needed to send in a petition to a GM so we could enter as a group. Same goes for Attilius’ Mansion. Should be fixed but… let’s be honest here… I doubt that they will ever do that.

Well I’m hoping the current dev team can fix it.

as a level 40? On what class? I haven’t tried to solo it but I don’t imagine it would be easy.

I did epic Attilus Mansion with a group when it first came out, it was pointless as the drops were the same.