Tree house foundations and annoying thing on my screen

So i waisted money on ur dlc since i only used the bed. Why cant the treehouse foundations be extended like any other foundations on any other game. I literally cant put any of the stuff that came with it in the dlc on it, think about that. Also the help buttons down in the corner, why should i have to turn them off ever time i get on so every time the game crashes like u know every 45 minutes theres these damn buttons again. Common guys u can do better if u can get boobs down like that.

The bridge cannot attach to the tiles, which is why foundations would save time and let me use a bridge since no one wants to try to find two trees side by side or a tree right next to a cliff This is one of many things in conan that does not make “sense”. The way it is set up now does not actually allow a player to build a useable space as a “tree house” i mean ya aint evan got a trap door for the thing. It turns into a platform that u cant get on unless u dont finish one side of it or build it next to a cliff.

Ofc bridges can attach to the tiles, I think there is something you’re doing wrong or misunderstanding. Here’s an example I just done: 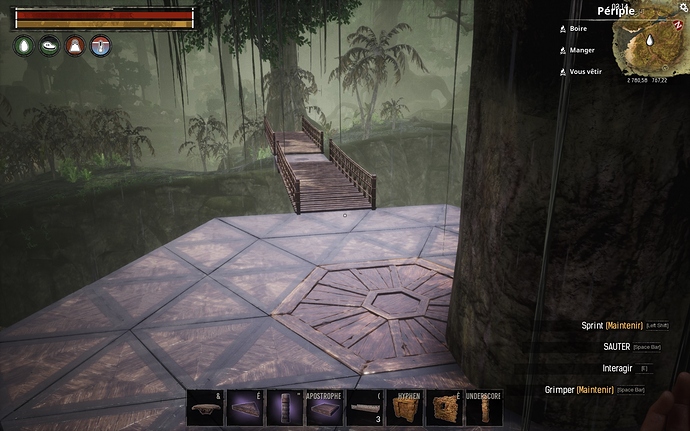 And as you can see you can get some place around the foundation thanks to tiles.

Yes that is what im trying to do, hold on ill figure it out now that i got proof, thks

Hey bud ur on pc?

Anyway sry i guess i shoulda made it clear in the beginning. Im on xbox. We have got it hard on console i can only attach a bridge after extension once. There for the platform is kinda useless Which is why im saying rid of them all together and just use foundations. Or just change some settings. Thks for trying o help me out tho

Got it with wedges then a regular foundation but only the small bridge, so ya helped me out a bit but i mean its not quite the idea, lot of pillers r just gonna ruin the look