Craft a stater truncheon on the starter river. Find a named thralls try to knock them out, kill them instead with pictures so you can.

I stopped and let her heal up twice and still it killed her in the end.

I do have Szeth’s Truncheon in my inventory as I had gone and got it in Set city but was testing the starter one that we can make at low level as it is the one that should be good enough to handle thralls on newbie river or why put named thralls on that river if you can not knock them out without killing them is my main issue with this bug. 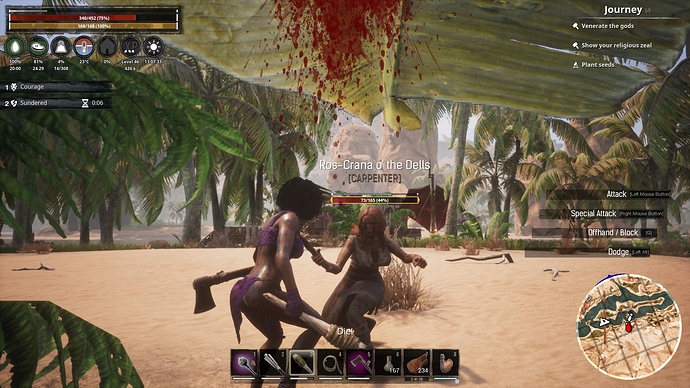 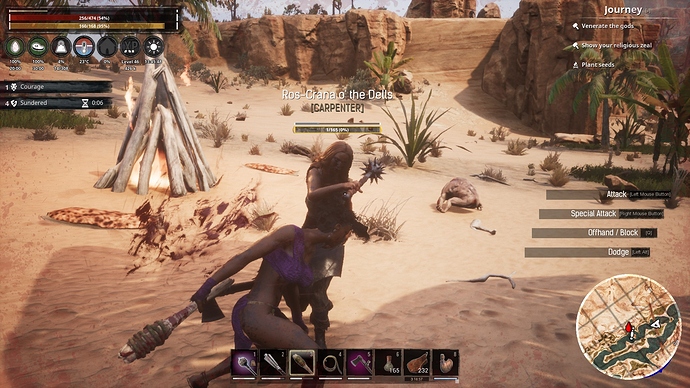 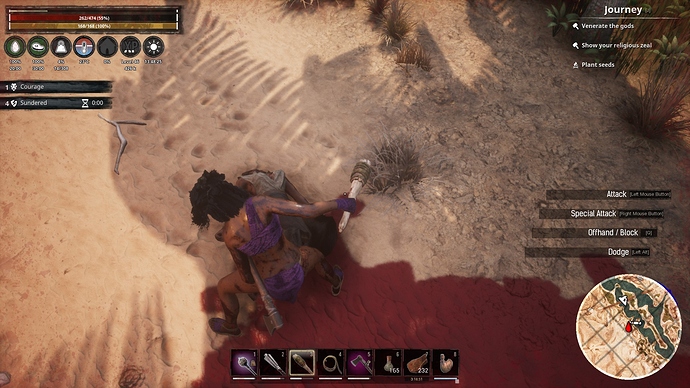 I can’t reproduce this issue on vanilla singleplayer no mods, no concussive damage adjustments. Even without any str points and no blunted fitting on my truncheon, I ended up with like half hp bar when using simple rmb attacks: 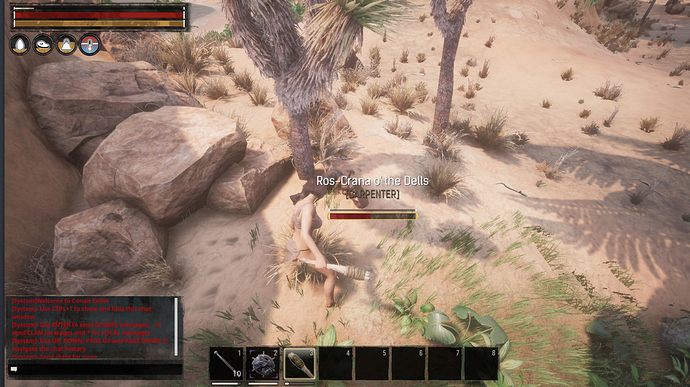 With simple lmb attacks which do less concussive damage, I still couldn’t kill her: 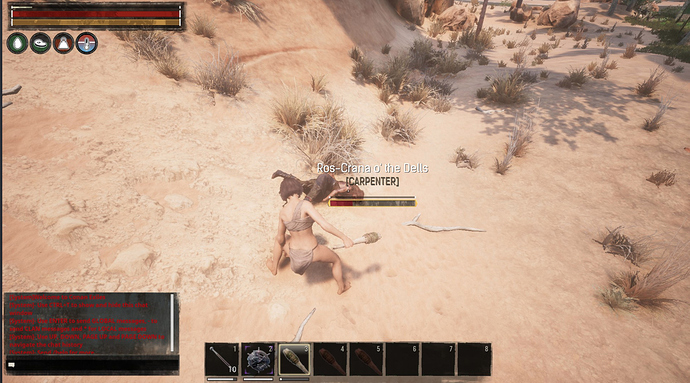 Craft a stater truncheon on the starter river. Find a named thralls try to knock them out, kill them instead

Ouch, that’s a pain. Odd that that happened to you, I knocked out a Cannibal Brute in Skulker’s End a couple of days ago and didn’t see the same behaviour, I’ll have to see if I can reproduce what you are seeing.

I did it with a level 24, with all attributes spread evenly (except nothing in grit), would that be similar to your setup?

These are my stats. 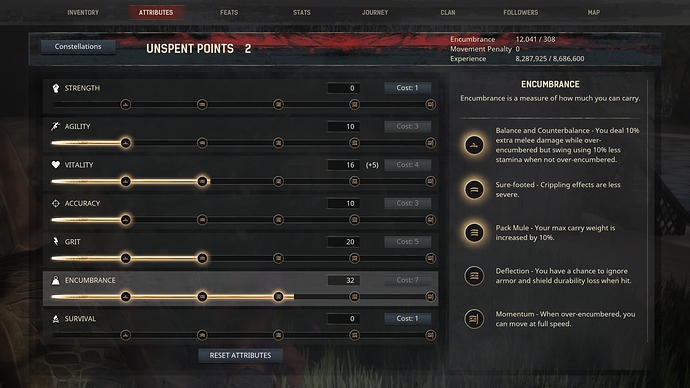 If you have the first perk in strength, this shouldn’t be an issue as your concussive damage would increase by 100%, and that’s enough to help you knock thralls without killing them. Also try to place a blunt fitting on your truncheon available at level 26 which should speed up capturing thralls. 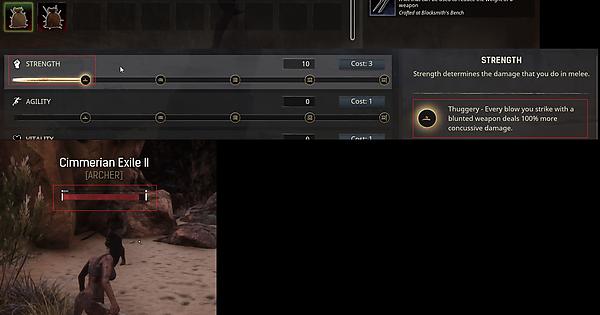 if you have the first perk in strength, this shouldn’t be an issue

True, but I’m pretty sure that the wooden truncheon used to do more percussive damage than other damage “off the bat” (if you’ll pardon the pun). Surprised that it’s killing so handily as @heaventhere has demonstrated.

Will test again tonight if I can find a named to hit (or will spawn one on TestLive).

As we know, all humanoid enemies (to a degree) can be knocked out, however crafter thralls have less of of knockout… health? Not sure what to call it. Fighters and archers have more. It gets higher if it’s a T4.

For Ros-Crana o’ the Dells - T4 Crafter + Exile, you need the Thuggery perk, else will die.
For Cannibal Brute - T4 Fighter + Darfari… well that’s not comparable, they’ll survive, they are stronger.

See these three lovely ladies? They are T4 Exiles, with too much knockout health, and too little health, they’ll die. With or without Thuggery. 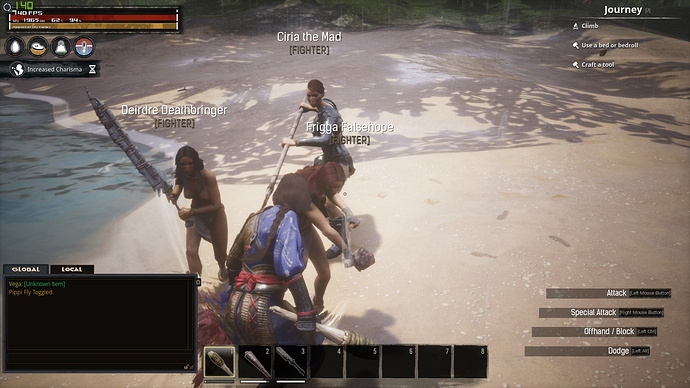 Funcom seemed to have messed with T4s or something. As I know, T4 Exiles… they were able to be knocked out before, and they shouldn’t die with a wooden truncheon… Until it’s fixed. I recommend you use the blunted javelin at level 21.

If you have the first perk in strength, this shouldn’t be an issue as your concussive damage would increase by 100%

As for myself I never go hunting for Thralls without this 1st perk. It’s toooooo long to knock them out even if they survive such procedure.

I had this same issue a few days ago on an official server, the base truncheon would do mostly regular damage but also a tiny amount of knockout damage and I was accidentally killing all the thrall. Then yesterday I crafted a blunt javelin and it was working amazing, just a few hits and they were knocked out! Then today I noticed that I was hitting them and it was doing nothing at all I was just getting my butt kicked and almost died, then it disappeared out of my inventory! So I crafted another blunt javelin and same thing, sucker almost got me killed then disappeared. So I crafted a basic truncheon and that works now. What in the world is going on? This is driving me nuts.

Then today I noticed that I was hitting them and it was doing nothing at all I was just getting my butt kicked and almost died, then it disappeared out of my inventory!

On this, it’s likely that the duration wore out on the jav. They are not durable.

The other possibility is that you hit heavy attack by mistake - I’ve hurled more than a few in the heat of battle and not noticed it.

Finally, there is an issue with “ghost javelins” I have noticed. If the jav breaks while it’s equipped, your action bar will “grey out”, but it still appears as though you have a javelin. You even do the attack animations. But you will do no damage.

To fix that, you need to unequip the jav, equip another item, and get new javelins.

The concussion system is totally borked. Impossible to subdue a thrall without killing them first. THIS IS A GAME KILLER.

I have the first perk, thralls are taking minuscule amounts of concussive compared to health damage. Plus they regenerate concussive hps much faster than health, so hanging back and allowing them to heal damage, a tactic I have used often, is ineffective. If you have a follower to do the subduing for you this is not the case. I am currently starting a new character and it is impossible to get that first thrall.

Try to go to Sepermeru and rob chests there on the towers. If you are lucky then you’ll get Advanced Blunted Weapon Fitting quite soon. You can safely get to Sepermeru in such a way: 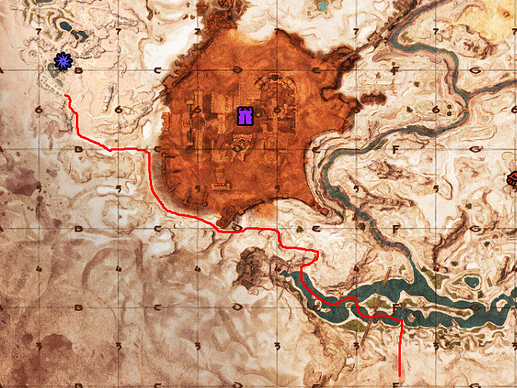 To Sep694×522 293 KB
You will meet no enemies on your way except a couple of Hyenas which you can run past safely if you’re quick enough. In fact I build my first base there in SP and rob chests until I get enough light armor, instruments and Steel bars. After that I return to the Newbie river to get my first Thrall having a Truncheon with this Advanced Blunted Weapon Fitting. IDK they say NPCs in Sepermeru are sometimes hostile now but there are some places where you can climb up far from any NPC. Just have a light armor and put some extra points into Grit to climb higher.
2 Likes
akajester May 17, 2020, 12:57am #16

So I think my issue with the regular truncheon was definitely real. You may be right that I accidentally threw the blunted javelin and I’ll test that out to be sure. Thanks for the info!

ok, went back in last night and yeah I think I was throwing the javelin as it works flawless and knocked out thrall easily with proper use. I went back to the regular truncheon and almost died as it still doesn’t work as it should so that’s definitely still an issue.